Here is another small special situation -- Perfumania (PERF) is the largest specialty retailer and distributor of fragrances and related beauty products in the United States, they've suffered from the Amazon effect and resulting decrease in mall traffic like many other specialty retailers.  On August 26, Perfumania filed for chapter 11 bankruptcy protection, primarily as a way to bring their mall landlords to the table as they explicitly call out that significant landlords would only negotiate with them if the company was in bankruptcy.  All of their other creditors will be unimpaired including the controlling family, the Nussdorfs, who are both their largest creditor and equity shareholder.

The Nussdorf family owns just under 50% of the equity, they're proposing to pair up with another large investor, the Garcia family, to recapitalize the company and inject $14.2MM into Perfumania.  Their plan is to take the company private and then shutter much of the 226 retail store footprint, instead focusing on the distribution side of the business.  In order to speed things along and ensure a quick stay in bankruptcy, they're throwing a bone to the minority shareholders by giving "the opportunity to receive consideration of $2.00 per share in exchange for completing a shareholder release form."  The company's financial advisers call it a "gift" and that the company has no value on a going concern basis.

There are some NOLs here to protect, and the Nussdorf family has loaned the company $85MM, their interests are somewhat aligned to see this company restructured and perform well moving forward.  But time is critical for any retail turnaround story, hence the need to rid themselves of any delay from angry shareholders.  The opt-in date for the shareholder release form is 10/6/2017, or less than a month away, and shares currently trade for just over $1.80 per share representing a fairly decent short term return opportunity.  There's risk here, if the deal gets pulled or the plan doesn't get approved by the court (both seem unlikely?), we already know the equity is worthless, size appropriately.

Disclosure: I own shares of PERF
Posted by MDC at 1:33 PM 26 comments:

Email ThisBlogThis!Share to TwitterShare to FacebookShare to Pinterest
Labels: Perfumania

This news hurt a little this morning, but there's a potential silver lining, I mentioned ZAIS Group (ZAIS) last year on the blog as the external manager of ZAIS Financial Corp (ZFC) that was being merged into Sutherland Asset Management (SLD).  ZAIS Group at the time was a struggling structured credit manager, their flagship hedge fund was bleeding AUM (still kind of is) and their base management fees didn't cover their operating expenses (still don't).  In February of this year, the company announced they were looking at strategic options and hinted at a going private deal which makes sense since this a controlled entity with the founder Christian Zugel maintain voting control of the former SPAC.

Since then, they've issued a sixth CLO and are warehousing a seventh, they've posted positive gains in their two main hedge funds for the year, and as a result are back to earning performance fees.  Their accounting is a little tricky with consolidation accounting for some of their CLOs and not others, plus it was a micro-cap and very illiquid, I tried for a while to establish a position and come up with my own valuation, no real luck.  But this morning, Christian Zugel filed a 13D in a manner similar to what Icahn did over at Tropicana (TPCA), but here he's already entered into a transaction with one major holder of ZAIS shares for $4 and wants the board to consider the $4 cash offer for the remaining shares he doesn't already own.

The stock traded below $2 yesterday, its still just at $3.38, I'm guessing this goes through without much of a problem and its mostly illiquidity, micro-cap, and obscureness causing the wide spread.  Kicking myself for not being more aggressive about buying it earlier, but I bought into today's news.

For the first time in a while there are a number of interesting spinoff situations on the horizon, one of which is NACCO Industries (NC) separating their small household appliances business, Hamilton Beach Holdings (HBB), from their legacy lignite coal mining business.  This split was announced in August with a quick turnaround for the spin to be done around the end of September.  From the surface this spinoff makes a lot of sense, why is a manufacturer of blenders and toaster ovens paired with a coal miner?  Who knows.  Both businesses should trade for different multiples and its no surprise that paired together they trade at a discount to peers.

NACoal/NACCO Industries (NC)
North American Coal Company (NACoal) is the coal mining operating subsidiary of NACCO Industries, despite being in the coal industry its structured as a fairly decent business.  Much of their operations are conducted in their "unconsolidated mines" segment where NACoal functions more as a service provider earning a small cost-plus margin arrangement and avoiding commodity related pricing risks.  How this works is their customers are large electric utilities that run coal fired power plants, often times these coal plants are located on top of or next to their coal power source.  The utility companies will finance and take on the cleanup cost liabilities for the mine, and will contract out the actual operations to NACoal.  There is no pricing risk as each mine exists to service one customer in perpetuity, their contracts are long dated, often times the length of the expected life of the mine.  For accounting purposes these mines are VIEs and since the customer has most (almost all) of the risk in the venture, NACoal is not considered the primary beneficiary and thus doesn't consolidate the results.

The business spits out a lot of cash, but it is declining albeit in a slow fashion.  What utility would invest significant sums to build a new coal fired power plant today?  Very few, if any.  Power plants last decades and even if the current political administration is coal friendly, I doubt many future ones will be the same.  As a result, NACoal's reinvestment opportunities in the coal business are pretty nil, they do have some small side businesses doing mining related services that operate under similar cost-plus arrangements and that's likely where any future cash will be deployed going forward.  Not great, but NACoal shouldn't be viewed as a royalty trust with a finite life.

In valuing the coal business, I think it should more closely resemble the multiple of an independent power producer versus the recently reorganized coal miners, most of which trade for 4-5x EBITDA.  The power plants NACoal services are primarily base load plants, there's some fluctuation in the results due to power demand/pricing, operational turnarounds, etc., but mostly its a fairly steady predictable business.  They should see some uplift in the coming years due to new contracts coming online (maybe the last of the new coal plants?) and something like fellow blog-name Vistra Energy (VST), which actually does its own coal mining, trades for around 7.5x EBITDA.  I think that's a fair multiple for NACoal given the drivers of the business, they did $35MM in EBITDA in 2016, 2017 will be higher, but we'll just go with $35MM, at a 7.5 multiple that's a $262MM enterprise value.

Hamilton Beach Holdings (HBB)
The spinoff will house a fairly popular small household appliance brand (they outsource all their manufacturing) in Hamilton Beach and then a struggling retailer that has little value in Kitchen Collection.  Hamilton Beach makes blenders, coffee makers, toaster ovens, juicers, indoor grills, etc., it sits mostly in that middle ground between a consumer staple and a durable, these aren't everyday purchases, but aren't large appliances that are big ticket items.  In terms of branding, Hamilton Beach sits in the middle again, they sell through Walmart, Target, Kohls, and Amazon, maybe not the best positioning to take, but they are moving more upscale with their recently launched co-branding efforts with the high end Wolf appliances.  That move upscale has flowed through in their results with widening margins and anticipated revenue growth for 2017 (much of their business is weighted towards the holiday selling season).

Kitchen Collection is a small household appliance retailer (they sell other brands in addition to Hamilton Beach) that operates primarily in outlet malls.  The concept has been hit pretty hard by declining mall traffic, NACCO has been closing stores pretty consistently since 2012 when they had 312 stores to just 209 today.  Kitchen Collection about breaks even and is likely of little value, hopefully they can manage the wind down as to not disrupt the overall HBB results.

There are a number of consumer brand rollups, Newell Brands (NWL) or Spectrum Brands (SPB) for example, that would be a logical buyer of Hamilton Beach at some point.  Both NWL and SPB trade for 14-15x EBIT, Hamilton Beach (with no contribution from Kitchen Collection) should do at least $45MM in EBIT in 2017, even putting a discounted multiple on the business of 12x would equal ~$565MM for the spinoff.

Add the two pieces up, $262MM for the parent and $565MM for the spinoff, minus $54MM of net debt (which is at the parent) and you get an estimated equity value of ~$775MM versus a current market cap of $475MM.  Another way to put it, the market is likely putting little to no value on the coal business despite its asset light nature and consistent cash flows.

Other/Risks
Disclosure: I own shares of NC
Posted by MDC at 2:45 PM 86 comments:

Inotek (ITEK) is a rather simple and small idea that adds to my recent theme of buying up the scraps of busted biotech companies.  Inotek was focused primarily on the treatment of glaucoma, an eye disease with a high unmet need, however their only drug, Trabodenoson, failed recent trials and it appears to be the end of the road for Inotek.  They've suspended research and development, hired Perella Weinberg Partners to pursue strategic options, and now sell below net current asset value.

Their balance sheet is now mostly cash and short term investments, offset by some convertible notes: 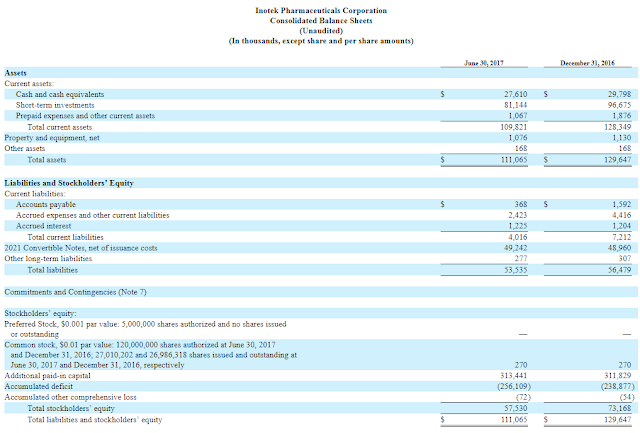 The current market cap is around $27MM, they'll burn ~$4MM a quarter on G&A and interest costs, and NCAV is ~$57MM.  Inotek does also have $105MM in NOLs, but the company should probably just call it a day and liquidate, hopefully we know more soon, but this seems like a fairly straightforward bet.  The biggest risks are the burn rate being higher than anticipated and/or a bad reverse merger transaction happening, both are more likely than I'm probably baking into the situation.

Disclosure: I own shares of ITEK
Posted by MDC at 2:19 PM 6 comments: