Last week I attended a panel discussion titled "CLOs in the Heartland" hosted by Mayer Brown and Fitch Ratings, while most of content was directed at the structured finance industry (my day job), I found a few of the topics applicable to the broader value investing universe that I thought I'd share.

CLOs, Leveraged Loan Funds and Oxford Lane
For the uninitiated, Collateralized Loan Obligations (CLOs) are pools of leveraged loans that are then sliced (tranched) into different levels of risk and sold to institutional investors.  Unlike the ABS CDOs that were ground zero of the 2007-2009 financial crisis, CLOs experience few defaults as they were genuinely diversified among many different industries and weren't forced to sell assets that had dropped in value.  Contrastingly ABS CDOs ended up holding 100 securities that were virtually the same and all were impaired at the same time causing total losses in many deals up to the AAA tranche.  A good example of the collateral held in a CLO is Tropicana Entertainment's term loan they recently closed in connection with the Lumiere purchase.

CLOs are typically actively managed for a period of time by an asset manager, and those managers have begun facing considerable competition for loans from retail floating rate mutual funds and ETFs.  An interesting situation has the potential to play out in this space as a CLO represents essentially permanent capital for the manager for an extend period of time, during times of distress like 2007-2009, CLO managers were able to hold on to their assets and ride out the wave without investors demanding their money back.  CLO investors could only obtain liquidity by selling their CLO liabilities/equity holdings in the second market.  Whereas in a mutual fund or ETF, a manager would be forced to raise capital by liquidating their loan portfolio to meet redemption requests.

Retail investors have been pouring money into floating rate or bank loan funds as a safe haven from interest rate risk, the below slide from the conference shows the dramatic flows that occurred in 2013.  I would guess much of this happened after the spring when rates first began to start moving up. 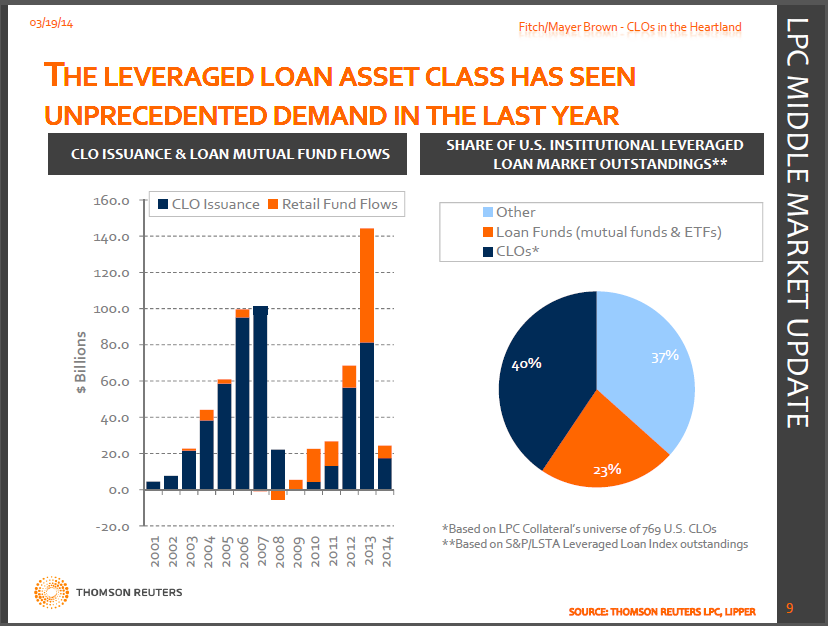 What happens when flows reverse themselves?  Leveraged loans are not book entry securities and aren't completely liquid.  Loans that trade hands on the secondary market can take 1-2 weeks to settle, and if they're distressed that time frame can stretch out into months.  Retail investors are by nature hot money, and may pull their cash at the first sign of distress causing liquidity issues for the managers of leverage loan ETFs and mutual funds.  This rush to exit and forced selling of supposedly liquid assets is what caused trouble in the money market fund sector, and could cause similar issues for bank loan funds.  A fund's net asset value might not be what it appears in a quick liquidation.

One panelist, Levoyd Robinson (fantastic panelist BTW) of Chicago Fundamental Investment Partners, pointed out the CLOs are essentially long volatility in the bank loan space.  Because of their pseudo permanent capital funding structure they'll be in a position to take advantage of any volatility caused by the retail investor exiting the space.  CLO equity (first loss position, 8-10x leveraged) targets internal rates of returns in the mid-teens, and his thinking is if volatility picks up, these returns would only increase over the full cycle as managers in CLO could pick off good credits from forced sellers.

Where could individual investors potentially take advantage of this idea?  Many BDCs hold CLO equity, but I'm not a huge fan of those as I think they're primarily built for the benefit of the third party manager.  But there is one BDC-like investment company that invests almost completely in CLO equity and a little bit in the junior/mezzanine tranches, Oxford Lane Capital (OXFC).  While I haven't done a lot of work on Oxford Lane, a few things do jump out at me, they have been ramping up their equity base and buying a lot of the recent CLO issuances.  Is this because CLOs are a great deal now?  Eh, more likely the 3rd party management agreement that encourages asset growth over total returns.  But it is a pure play on CLO equity, and will likely perform better in a rising rate environment than the mortgage REITs.

BDC's Continue to be Popular
The growth of BDCs and its potential issues is another area that concerns me and might be ripe for distressed investing situations in the future.  Their growth as been pretty incredible as retail investors continue to scoop up anything with a high yield, never mind the fact that they're taking incredible amounts of risk to secure that yield when they could take fractions of the risk for the same return if they had a total return mentality. 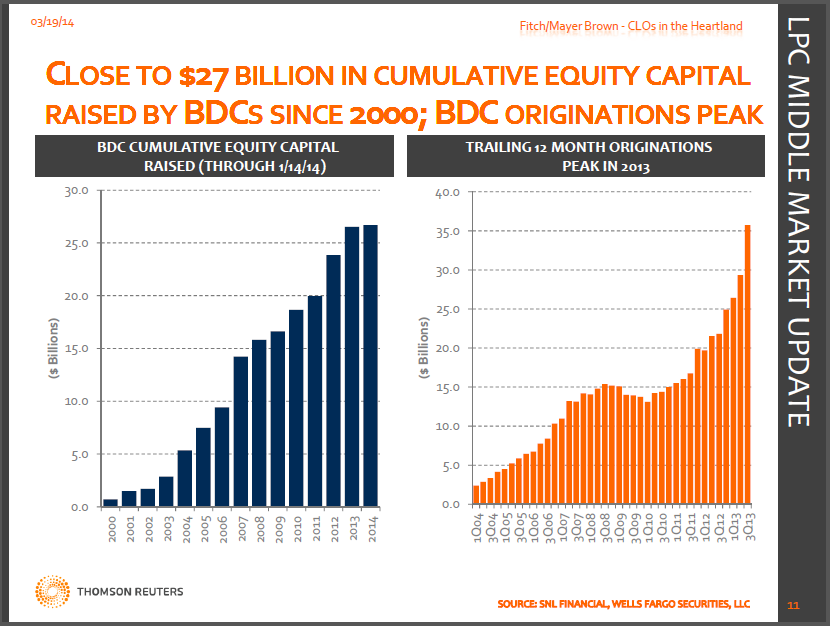 One hallmark of BDCs has been their limit on leverage to one times equity, however there's talk of that increasing to two times leverage by the end of the year.  Politicians are putting this forward as a way to increase lending to small businesses, but the fact remains that most of the loans that end up in BDCs are not to small businesses or venture capital like startups, they're the same stuff that finds their way into CLOs.  Continued low interest rates and competition for leveraged loans is making it more and more difficult for managers to grow their distributions, so one way to make that problem go away is more leverage.  Expect a few blow ups in this sector during the next recession.

Blog Note
I will be attending the 9th Annual Credit, Restructuring, Distressed Investing & Turnaround Conference next Friday (4/4) in Chicago, and would enjoy meeting up with any readers who are also attending, so if you are attending please send  me a note.  I doubt there are many attractive active distressed ideas out there currently, but it will be interesting to hear the panelist comments and hopefully come away with a few areas of interest to watch for as the business cycle unfolds.

Disclosure: No positions
Posted by MDC at 2:11 PM