[Apologies for another SMTA update, I'm still active, but I haven't really bought much new lately.]

Spirit MTA (SMTA) this morning announced the sale of the assets contained within the Master Trust to Hospitality Properties Trust (HPT) for ~$2.4B, after redeeming the Trust's debt and other transaction expenses will net SMTA approximately $450MM (I was hoping for more like $500MM, but this is a reasonable outcome).  HPT shareholders (bagholders?) might be asking why a hotel REIT is buying net leased retail assets, but it is good news for SMTA shareholders as the transaction is for cash that has committed financing from an investment grade borrower and doesn't require an HPT shareholder vote.  HPT is externally managed -- abused -- by RMR Group (RMR), they're interested in increasing AUM and resulting management fees, closing is targeted for the end of Q3. 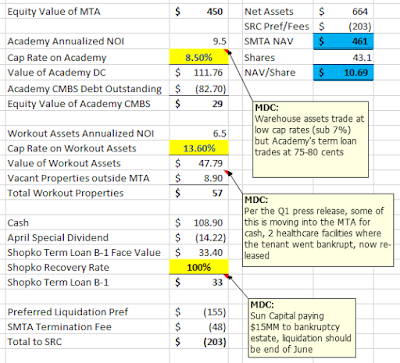 With no value to the remaining NAV pieces that are in question, the value to SMTA shareholders is approximately $7.90, so at today's price of $8.30 (and assuming the deal closes), you can buy the remaining assets for $0.40 with upside of potentially up to ~$2.50-3.00 of value on the workout and other assets.

Old news to those deep in the comment section of my earlier SMTA post this year, but here are additional thoughts on the remaining NAV components/risks:

As part of the spinoff, SRC via SMTA loaned Shopko $35MM via a term loan to receive access to ShopKo's periodic financials.  When Shopko filed for bankruptcy in January, SMTA wrote off the term loan and as a result, it doesn't appear in their NAV table, however, per the liquidation waterfall in the almost wrapped up Shopko bankruptcy, the term loan should be paid in full. 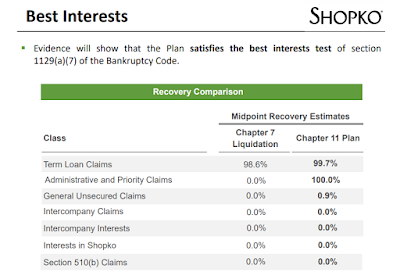 The low end estimate also shows essentially a full recovery, that's approximately $0.75/share, already well ahead on the $0.40 investment in the other assets above the MTA and cash.

The Academy Sports + Outdoors distribution center in Katy, TX is another big component to the other asset category, it is Academy's largest warehouse and home to their headquarters.  Like many other retailers, the company is struggling, it's owned by KKR and has significant debt that trades at a discount.  But if they were to restructure, I'm guessing they'd keep this warehouse as again, it's their headquarters, and it serves their largest/original market in Texas.  Katy, TX is outside of Houston, home to many large warehouses including Amazon.  Industrial real estate is hot right now, just this weekend Blackstone announced another deal (they've done several including GPT and FRPH).  As part of the CMBS financing transaction, the property was appraised at $144MM in 2018, and Academy's distress was very apparent at the time of this appraisal, below is the chart of the Academy term loan going back to issuance.  It trades for 75 today, down from early 2018 levels, but was still in distressed territory back then, it's not a new story.

On the workout portfolio, many want to write these off completely, much of these are actively leased, just don't fit the portfolio profile of a publicly traded REIT but still of institutional type asset quality.  From the Q1 recorded conference call:


"Starting with portfolio activity, we continued to actively manage the portfolio during the first quarter, selling three properties for $5.4 million in gross proceeds. We also executed a lease with 7-Eleven on a former non-core vacant asset which we will look to dispose of at a far improved price above its previous start value.

In addition, the leases for two non-core assets formerly leased to Neighbors Health System have recently been assumed by new operators. We plan on contributing those two assets into the Master Trust, which allows us to deploy restrictive release account cash before that cash is swept to repay ABS notes with corresponding make whole penalties. In turn, these contributions will enhance our unrestricted cash position outside of the Master Trust."

The new tenant is Diagnostic Health and according to the servicer report, entered the trust with a collateral value of $8.41MM at a cap rate of 13.6%, assuming the same cap rate across the rest of the workout portfolio plus the book value of the vacant properties nets out a $57MM value.  This number likely has the widest range of outcomes, much of the value is a multi-tenant office building leased to PwC in Columbia, SC, hard to get a read on how much that asset is worth, open to others thoughts.

Another risk people site is the Shopko CMBS lender coming back to SMTA, but it appears the CMBS lender has moved on, as mentioned in the SITE Centers (SITC) Q1 call:


"First, we signed a management agreement with Credit Suisse, providing them advisory and operational services for 83 assets leased to Shopko on which they have recently foreclosed. Importantly, the agreement came with rights of first refusal for 10 assets in the portfolio and allowed us to leverage our existing operating platform to generate nearly 100% margin on any fees we received. Credit Suisse's needs were ultimately short-lived, but we nonetheless earned the $1 million in the process which was a contributor to our strong quarterly results."

Later in the Q&A, they clarified it was a short lived asset management agreement because their client sold the portfolio quickly.

Putting it all together, I think it's pretty reasonable to come up with $10.70 NAV with some range of outcomes around that value primarily dependent on the Academy distribution center and other workout assets being sold for reasonable valuations.  The main risk from here is the timing, HPT didn't buy the SMTA holding company, so there will likely need to be a small holdback amount to address any clean up and other shut down expenses.  Maybe its $10 by the end of Q3 with the remainder sometime down the road after that?  The other concern might be the HPT deal requires a shareholder vote at SMTA, SRC is waiving their promote/incentive fee surprisingly, maybe to get in the good graces of a couple activist shareholders in Indaba and Mangrove, but surprising nonetheless for Jackson Hsieh to leave money on the table.  I find the valuation compelling today and added more, it's my largest position by a decent margin at this point.