Ben Franklin Financial (BFFI) is a tiny (sub $10MM market cap) two branch community bank located in the northwest Chicago suburb of Arlington Heights that completed its second step mutual-to-stock conversion in 2015.  Ben Franklin Financial is a pretty straight forward community bank, it takes in deposits from a small local radius and primarily turns around and makes a mix of residential mortgages and commercial loans.  At just under $100 million in assets, Ben Franklin Financial is sub-scale, poorly managed and as a result loss making bank (to pile on, BFFI was also operating under an OCC consent order until this past February) that caught the attention of community bank activist Joseph Stilwell who encouraged the company to pursue shareholder friendly actions like repurchasing shares or pursuing a sale.  In July, the company announced a unique sale transaction with Illinois based Corporate America Family Credit Union ("CAFCU") for between $10.33 and $10.70 for shareholders, the stock bounces between $9.60 and $9.80 today.  Why sell to a credit union?  Since a credit union is technically non-profit, they might be willing to pay more for a struggling operation like BFFI since they just need to cover their operating costs.  The credit union buying a bank thing is a recent trend but this is a first of its kind transaction where the credit union is purchasing a bank that converted from a mutual holding company.  The catch being there is some uncertainty as to how depositors who did not participate in the mutual conversion process will be treated in the liquidation and other uncertainties like terminating employee benefit plans.  Not only is the amount uncertain, but the timing is as well, the transaction with CAFCU is expected to close in early 2020 with the distribution to shareholders occurring "within several months", thus this is more of a two step process, an asset sale and then a liquidation rather than a clean merger. 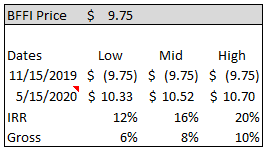 Maybe I'm underestimating the possibility of the deal breaking but I think you're getting paid for the illiquidity of a nano cap and the uncertainty of both the ultimate payout and timing, both risks that a small personal account like mine is well suited to take.

Disclosure: I own shares of BFFI
Posted by MDC at 3:04 PM