Financial markets are in turmoil, it feels like a strange time to be writing anything new as lives are being drastically impacted, hope this doesn't come across as tone deaf, keep your families safe.  I don't normally talk about macro or have any thoughtful insights into how coronavirus and the oil route will play out over the near term, but over the long term I suspect it will subside, we'll get through it, adjust in some ways and life will eventually turn back to a new normal.  But how long will that take and which companies won't be able to weather the storm?  My portfolio is hurting, I've sold some things I didn't want to sell to raise cash, I certainly don't envy anyone who is managing other people's money in the current environment.  However, some opportunities are arising from the wreckage and forced liquidation we've seen over the past few weeks, one such company is Madison Square Garden (MSG) -- zero points for originality here -- most readers will have likely read a dozen similar pitches, but given the pace and depth of market sell-off, I don't think there is any reason to over-complicate things and I bought some recently.

For the uninitiated, MSG owns two premier sports franchises in New York City (NBA's Knicks and the NHL's Rangers) plus several arenas and entertainment venues where they host concerts, comedians and other live entertainment.  At the end of the month (guessing that'll slip with the market conditions), the company is planning on splitting off the sports teams ("MSGS") from the entertainment business ("MSGE").  The sports teams are relatively easy to value as Forbes does most of the heavy lifting in an annual publication of sports team values, we could argue if Forbes systematically under-prices where private transactions have occurred or if the stock should deserve a minority discount, but either way sports teams are a valuable scarce asset that should trade within a reasonable discount/premium of the Forbes valuation.  The tougher side to value will be MSG Entertainment, and given coronavirus fears with all events either cancelled or postponed for the time being, it could experience significant volatility once it starts trading (again, seems likely the spin will be postponed, but it'll happen eventually).  Not to downplay the virus risk with MSG, both sides of the company will experience significant revenue hits this year as the NBA and NHL seasons are suspended and no large scale entertainment events will be occurring for the foreseeable future.  However, the sports teams are trophy assets that should continue to hold their value and at current prices you're paying very little for the entertainment business that despite a few red flags does hold some interesting assets.  The company is controlled by James Dolan, the son of Cablevision founder Chuck Dolan, the family's business empire has gone through a series of M&A and spin-offs transactions, mostly value creating, it currently consists of voting control over MSG, MSG Networks (MSGN), and AMC Networks (AMCX).

MSG Sports (MSGS)
I'm going to make it pretty simple with the MSG Sports business, this will be the parent (originally this was the spin but the transaction has since been revised to a simpler structure), below is the current Forbes valuation for each team and I'm going to use a swag 20% discount to account for a minority ownership discount, corporate overhead and the new arena license agreement both teams will have with MSG Entertainment. 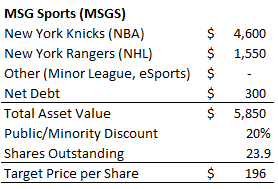 Most people are familiar with the sports team thesis, premier teams are relatively unique assets that are coveted by the ultra-wealthy and come with a lot of social status and tax benefits.  Plus, of course, sports have valuable media rights that content distributors will pay a premium for as its a must watch live viewing experience.  James Dolan is widely considered one of the worst owners in sports from a fan's perspective, over the past several years he's gotten into public spats with several Knick icons like Charles Oakley and Spike Lee more recently which haven't improved his image.  Fans chant "sell the team" at home games, not a great look.  But despite that, Dolan seems to have no intention of selling the teams or giving up majority control, so this does deserve some discount for minority rights and then just all the overhead, jets, potential taxes in a sale, etc.  Going forward, the current capital allocation plan is to return capital to shareholders, so this should be a fairly simple story to value and own.  And of course, if the Knicks ever return to being a winning team, there could be additional upside from playoff ticket revenue and associated sponsorship opportunities.

MSG Entertainment (MSGE)
The spin-off will be the entertainment company, this side of the business is more challenging to value as its probably best done as a mix of an NAV and an earnings based metric on some of their operating businesses, however the financial disclosures make this a challenge.  Not to be lazy, but at today's current price of ~$200 (could change wildly by the time you read this) for the combined company you're not paying much for the entertainment business so this will be light on hard numbers.  MSGE will consist of the following assets: 1) the Madison Square Garden arena itself and associated air rights (I'm skeptical of assigning value to the air rights, but if you think they're worth something, go ahead); 2) MSG Sphere under construction in Las Vegas; 3) the Forum in LA; 4) Chicago Theater; 5) Christmas Spectacular show featuring the Rocketts; 6) leases and operations of the Radio City Music Hall and Beacon Theater; 7) the events booking business at all their venues; 8) a controlling stake in Tao Hospitality; 7) and some smaller assets like a stake in Townsquare Media (TSQ) and festival promoter Boston Calling.

I tend to like these grab bag of assets that are hard to value spin-offs as they don't fit neatly into a valuation box which makes them hard to own for some investors.  This one has its own unique challenges obviously with the coronavirus halting near term operations, but could present a longer term opportunity, we still have Instagram, people want to be seen and be social, we'll still want to attend big live events when this passes.

The Garden
The company namesake property is located in Midtown Manhattan atop of Penn Station, the current structure dates back to 1968 and was heavily renovated in 2011-2013.  As part of the spin-off, both the Knicks and the Rangers entered into long term lease agreements with MSGE to remain at the Garden for the next 35 years.  The arena license is almost structured like a triple net lease, the sports teams will be responsible for the maintenance and property taxes associated with the arena, the Knicks will start out paying $22.5MM and the Rangers $16.7MM per year with a 3% annual escalator.  What cap rate would you place on that lease agreement?  I would think given the location, high investment grade tenants, where interest rates are today, that this would be valued a very low cap rate. In addition, MSGE will get a portion of the sports team's suite revenue, on-site advertising, concessions, etc.  This also doesn't include the non-sports booking business where the Garden regularly hosts premier music and comedy acts.  Putting a 4.5% cap rate on the arena license makes it worth ~$900MM, with the additional revenue and air rights, I think its reasonable to assume the Garden is worth somewhere between $1-1.5B.

MSG Sphere
The MSG Sphere is an outlandish live entertainment venue being built next to the Venetian hotel on the Las Vegas strip, the current projected cost is $1.66B (up considerably from where it was first discussed in 2018) with a goal to be open by the end of 2021.  It's a bit wild to think of building an arena for $1.66B without an anchor tenant, for example the T-Mobile Arena which is located between Park MGM and the New York New York casino, is the home of the Vegas Golden Knights (NHL franchise) and the Las Vegas home o't f UFC events and was built for only $375MM.  The $1.66B price tag ($268MM of that has already been spent) also doesn't include the content and expenses related to producing content for the Sphere.  This is essentially a bet the company type investment and management has been a bit cagey about estimated returns.  And the problem with cost overruns is they don't lead to additional revenue, so each time the costs go up, the returns likely go down.  MSG has been successful in the past (management likes to point this out when defending the Sphere) in renovating the Forum and turning it into a premier concert venue, but that was only a $100MM investment, this might end up being 20x that.

The basic premise to the Sphere is it will be a totally immersive experience unlike anything else (for that price tag it better be), concert promoter AEG has a deal with T-Mobile arena and it is likely that MSG will strike a deal with Live Nation (LYV) to promote concerts at the Sphere ensuring a steady stream of big shows.  When not hosting a touring act, the Sphere is intended to have proprietary content (riskier business than the license your venue for a fee business, but potentially more lucrative) and be available to large conventions or corporate events.  The company intends for it to be more utilized than the Garden which would be quite a feat.  We'll see.  MSGE also has a site picked out for a London Sphere, they don't plan on starting construction until the Las Vegas one is complete (but reminds me of the line from the movie Contact, "why build one when you can build two for twice the price?").

Cash
MSGE will be spun with about $1.25B in net cash after receiving a payment from MSGS (usually the spin pays the dividend to the parent) but most if not all of that will be used to fund the construction of the Sphere, so maybe it's worth applying a haircut to the cash, again I don't think it matters too much given today's valuation for the combined MSG but I wouldn't argue against it.

Again, apologies for being lazy on the MSGE valuation, don't think it matters at this price, and I just find it difficult to piece together based on the financial disclosures in the Form 10, but I've fared well in these grab bag type assets.  As they mature as a standalone, they tend to uncover value and become easier to understand. 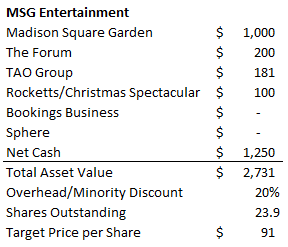 Adding them up, I get what I would call and overly conservative valuation $287 for the pre-split MSG shares.  We will recover, people will go out to live event again, but remember to wash your hands.

Disclosure: I own shares of MSG
Posted by MDC at 9:49 AM