Okay, so here I go with trying to value Howard Hughes Corporation on a sum of the parts basis.  There are a lot of assumptions and moving parts in the valuation of a company with such a wide array of assets across various real estate sectors, so I won't be surprised if I make a big error or omission.

The Woodlands
I'll start with The Woodlands, the master planned community located in Houston.  The MPC has limited real estate acreage available for residential and third party commercial developers.  I pulled sales information from conference calls, 10-Ks, and recent presentations to come up with price per acre and the costs numbers (40% of revenue).  I also assumed a straight line revenue and a discount rate in the range of what Howard Hughes has previous laid out of 10-20% (since The Woodlands is a fairly mature MPC I went with 15%).  I think the below might be understating the true value of remaining land as the Exxon campus gets built and Howard Hughes' own properties start filling up the Town Center area, but I think it's a good start. 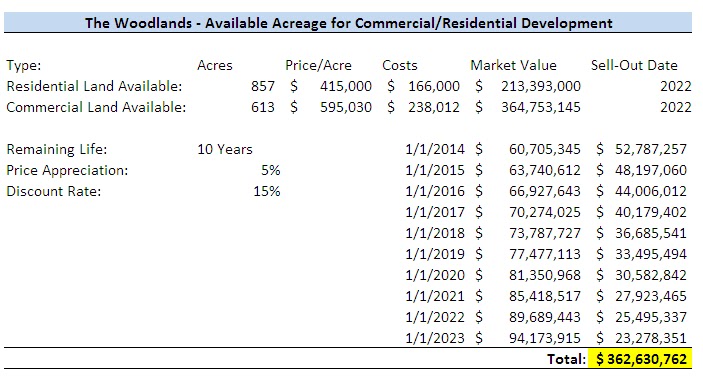 Howard Hughes is currently very active in developing and operating commercial property at the Woodlands, and that's where a lot of the value could reside in the public market space as MPC acreage can be too long lived for the typical public markets investor.  Below are the properties that are currently operating in the Woodlands and the three assets that are under construction.  I based the market values off of NOI, Howard Hughes has advised that an appropriate market cap rate for Houston is 7%. 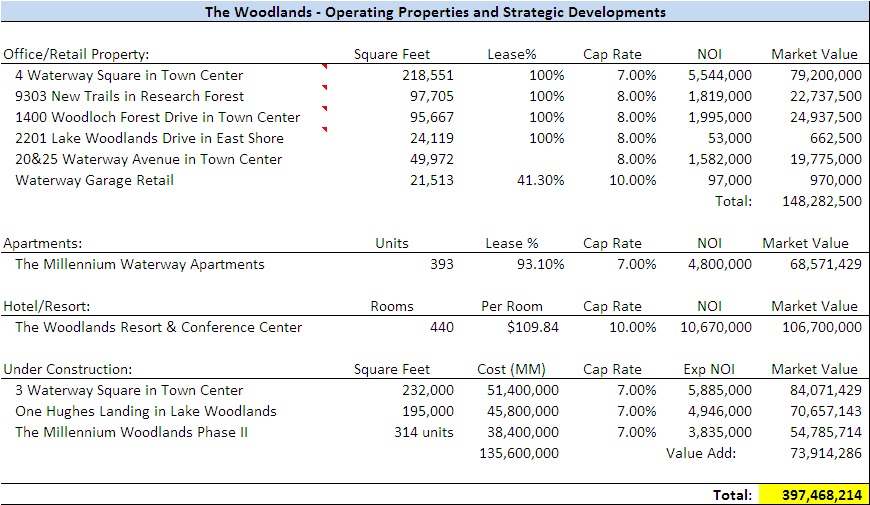 Lastly at The Woodlands, there is the remaining planned developments, both at the new Lake Woodlands development and in the Town Center.  With these estimates, I used Howard Hughes' guidance on the planned development opportunities and then extrapolated the costs and expected NOI of their current projects under construction.  Here is definitely where the numbers get a bit iffy, and you would need a bit of faith in management's estimates (also need to assume we don't hit another deep recession).  It's important to note that management believes the development of the Town Center will improve the value of the remaining acreage that is available for sale (hinted at an over $100MM increase in the value in the latest annual letter) which I have not included in either value estimate.

Bridgeland
Howard Hughes' youngest MPC is Bridgeland, northwest of Houston.  The long term vision is to create a similar development as The Woodlands where Howard Hughes would own and operate many of the town center's commercial properties using the proceeds from the residential properties to fund the development.  To be conservative, I just applied similar assumptions to available acreage for commercial and residential development to Bridgeland and left out any planned ownership of commercial buildings as Howard Hughes has not laid out any specific plans.  This time I upped the discount rate to 20% since Bridgeland is relatively new and has a long remaining life. 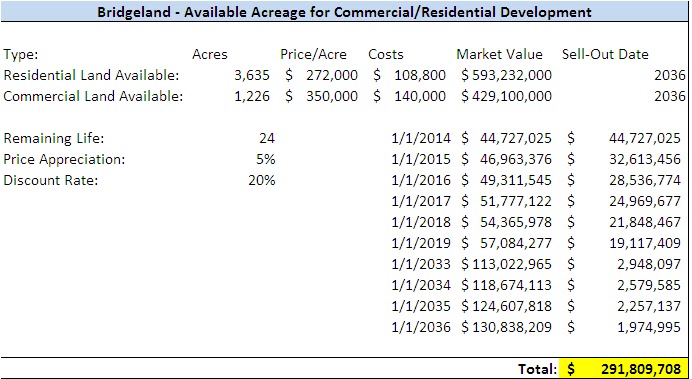 Summerlin
Howard Hughes development west of Las Vegas is Summerlin, currently home to over 100,000 people but with plans for approximately 100,000 more by the completion of the MPC.  Again I applied similar assumptions as to Bridgeland and The Woodlands on the remaining acreage for residential and commercial development, utilizing data from recent sales (in a distressed pricing environment for Las Vegas).  Recently housing prices have increased substantially and inventories are constricted in Summerlin, so I've increased the price appreciation assumption to 6% and used the same discount rate as The Woodlands of 15% since Summerlin is a mature development. 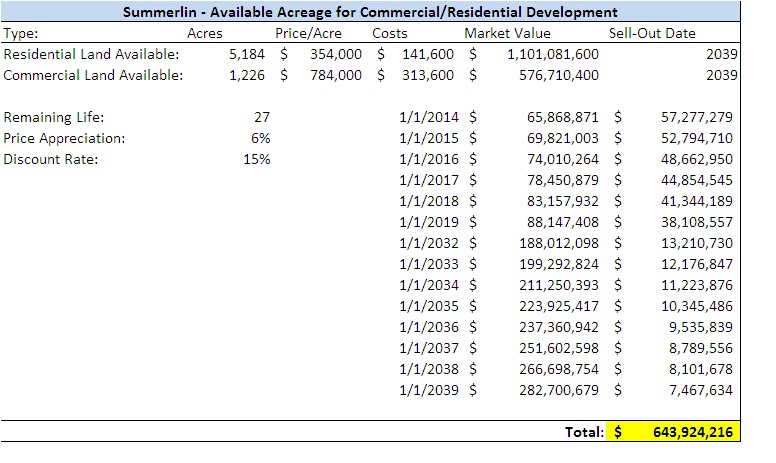 Similar idea as The Woodlands, Howard Hughes is breaking ground on the Shops at Summerlin this year which will include 1.5MM square feet of retail space and 200,000 square feet of office space.  The Shops at Summerlin are part (106 acres) of a larger (400 acres) planned Downtown Summerlin development which will include additional office buildings, condos, and apartments.  I've left Downtown Summerlin out of the valuation, but upon completion it should boost the overall value of the surrounding land as well.

Victoria Ward/Ward Village
Management describes Victoria Ward and Ward Village as the "crown jewel" of Howard Hughes and its where a bulk of the eventual value of the company could be realized.  In its current state, it has 665,000 square feet of retail space, but the plan is to eventually build 22 residential towers for a total of 4,000 condo units and over double the retail space to 1.5MM square feet over the next decade.  Howard Hughes has announced the first phase of this development, adding two towers of 500 condos at an average of 1,200 square feet a piece.  Local condo towers are reselling for $1400 a square foot, and management is estimating the cost to build at $900 a square foot.  In this estimate, I'm also including the $73MM expected to be received upon completion of the ONE Ala Moana condo project and an estimate of the future value of the redeveloped shopping district. 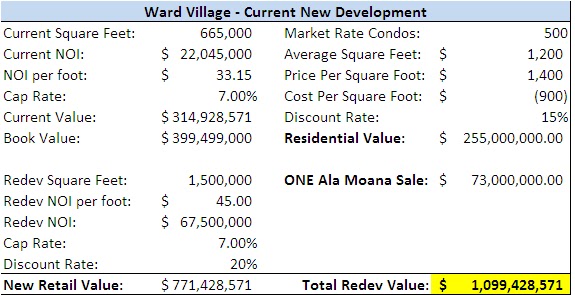 The long-term value lies in the development of the remaining 20 residential towers in Victoria Ward, it would be wise to put another big asterisk on the value here, but for those bullish on beach front property, it could be a huge revenue generator for the company. 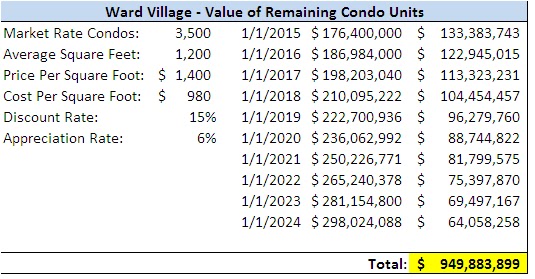 Maryland
Another "downtown" development that Howard Hughes is planning is in Columbia, Maryland.  Expect to hear more about this development in the coming year from management as the MPCs in the area are fully sold out of residential lots.  Howard Hughes, along with a joint venture partner, is developing an apartment building with 380 units with plans for up to 5500 more units in the area.  Howard Hughes also has plans for an additional 4.3MM square feet of office space and 1.25MM square feet of retail space. 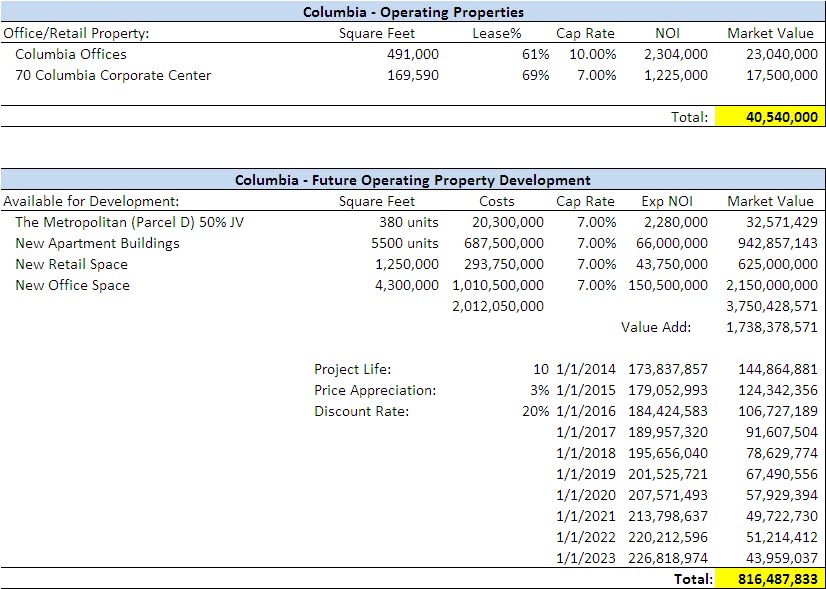 Other Operating Assets
Howard Hughes has some other miscellaneous retail and office assets that they operate.  For the sake of simplicity I grouped them all together and based their value off of a conservative 8.5% cap rate (my value here is below the book value).

Other Strategic Assets
One of Howard Hughes other strategic assets is the South Street Seaport in Manhattan.  The company recently outlined its vision to redevelop the property with SHoP to create a retail and functional space that both locals and tourists alike would frequent.  Currently rents go for $100 a square foot, clearly there is a lot of value to be created here, but given Superstorm Sandy and the unknown development costs I just included the development at half the book value along with Howard Hughes' other strategic assets that require a lot of development to bring up NOI to market rates. 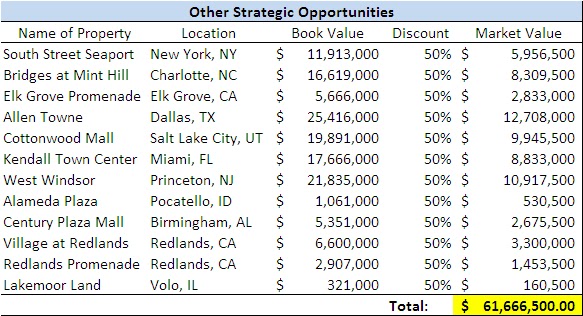 Sum of the Parts
Like I mentioned at the start, there are a lot of moving parts and assumptions necessary to peg a value on Howard Hughes' assets given the publicly available information in their filings.  I've purposely valued some of their assets conservatively to make up for the fact that I don't know their future debt financing or joint venture plans.  There are likely many errors in my analysis, its a step up from back of the envelope, so do your own homework. 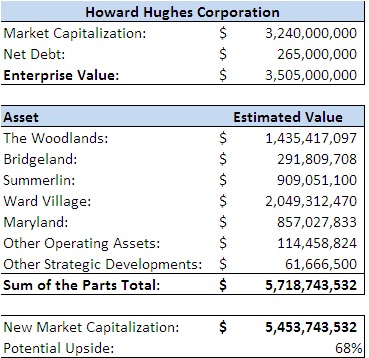 In summary, despite its recent run-up Howard Hughes still provides plenty of upside potential as the projects in the pipeline hit their development targets (future developments become actual and no longer require such steep discount rates) and investors start to take notice of the cash flow potential of the portfolio.

Disclosure: I own shares of HHC
Posted by MDC at 3:46 PM