I apologize in advance for the long post, but I've held HHC since October 2011, enjoying a great return, but I believe there's still a lot of potential for the company as its misunderstood by most investors.

The Howard Hughes Corporation (HHC) is a collection of interesting real estate assets that was spun out of General Growth Properties (GGP) in November 2010 following GGP's reorganization in bankruptcy.  The thought process behind the spinoff was rather simple, make GGP a pure play on shopping centers and spin out the assets that required significant development costs or that weren't shopping malls into a separate entity.  As part of the spinoff, Bill Ackman of Pershing Square became the Chairman; Pershing Square along with Brookfield Asset Management own 29% of Howard Hughes.

I mentioned in my last post that I believe REITs in general are overvalued, but Howard Hughes is a real estate company that has currently elected not to be a REIT and that could be a source of value as investors might not understand the value of their operating assets.  By not organizing as a REIT, Howard Hughes is also able to retain its earnings to invest in the development of their wide range of assets, eventually adding additional net operating income producing properties.

Howard Hughes groups its assets in three categories, master planned communities ("MPCs"), operating assets, and strategic developments.  I'll review and touch on the potential value of each one below.

Master Planned Communities
Howard Hughes' master planned communities consist of four segments: Summerlin, The Woodlands, Bridgeland and a group of four smaller MPCs in Maryland.  The MPC business is one with a very long time horizon, developers need to put up a large amount of capital initially to build out the infrastructure for an uncertain return that can take decades to realize.  Part of the beauty of the GGP bankruptcy and HHC spinoff, Howard Hughes received the MPC assets after predecessors had already invested in the initial capital.  MPCs are also hard to value because they have such long lives (what discount rate to use?) and their revenue can be very lumpy. 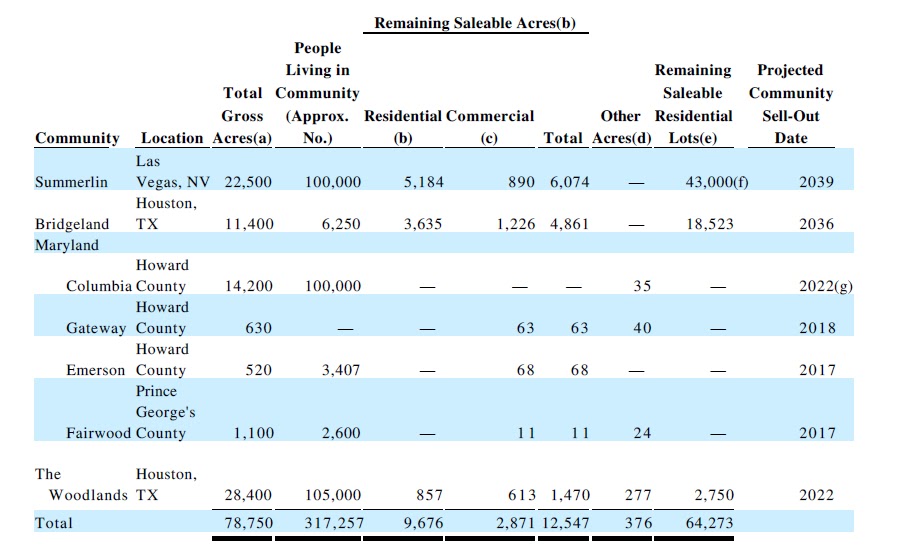 The Woodlands (Houston, TX)
The Woodlands is a large (1.5x the size of Manhattan) and mature master planned community located in Houston, Texas.  Houston has recovered nicely from the financial crisis as Texas has experienced an energy boom and has attracted businesses with its low tax rate.  For instance, ExxonMobil recently announced the construction of a large corporate campus that will be the home to 10,000 employees just south of The Woodlands, a potential catalyst for additional office building development and sales of residential lots to home builders in the area.  The Woodlands is a mature MPC, with limited residential lots remaining, but remains an important asset for HHC due to the robust downtown and opportunity to build out new many new operating assets.

The Woodlands has 2,750 residential lots available, and they've averaged a sales price of $95,000 per lot over the past three years (trending up to $102,000 last year).  The commercial land has averaged $475,000 per acre over the last three years (both office and retail combined).  No matter the discount rate applied, clearly there's a lot of value left in The Woodlands.

Bridgeland (Houston, TX)
Bridgeland is a master planned community that consists of approximately 11,400 acres, residents first occupied the community in June 2006, giving the Bridgeland a long runway.  Predecessors invested $325 million dollars into Bridgeland before returning a single dollar, so the big initial outlay has already been made.  It's anticipated that Bridgeland will eventually have more than 20,000 homes with 65,000 residents.

One key driver of future growth is the expansion of the Grand Parkway (State Highway 99) providing easy transportation from Bridgeland to the rest of the Houston area.  Construction of the highway began in 2011 and is expected to be completely by the end of this year or beginning of 2014.  The successful sales and operating team behind The Woodlands, is also in charge of Bridgeland, so once most of the development opportunities at The Woodlands have been completed, expect a lot of activity in Bridgeland shortly after.

Bridgeland has 18,253 residential lots available, and they've averaged $53,000 a piece over the last three years.  I would expect as The Woodlands is completed, and the Grand Parkway built, that the average lot price would trend higher as Bridgeland matures and gains value.

Summerlin (Las Vegas, NV)
Named after Howard Hughes' grandmother, Summerlin is a large master planned community located approximately nine miles from downtown Las Vegas.  As of December 31, 2012, there were approximately 40,000 homes and occupied by approximately 100,000 residents.  The Las Vegas housing market was one of the hardest hit after the financial crisis, with housing prices down by more than 50%, but recently there's been some firming up of the local economy which should lead to some stabilization. 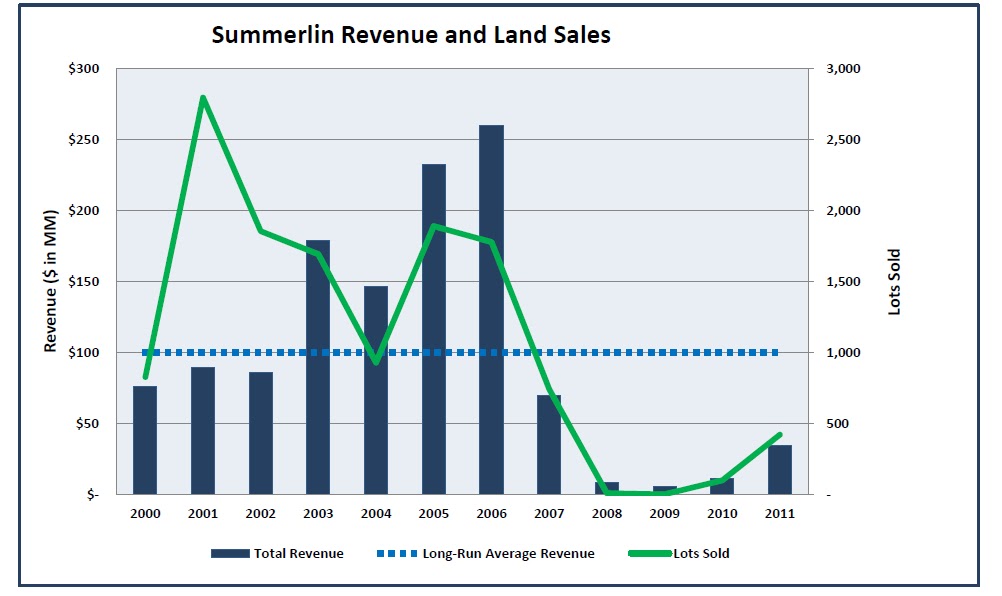 Even a modest uptick in prices and a return to the normalized long run average will provide substantial added revenue.  Howard Hughes is also developing a true downtown called the Shops of Summerlin, Dillard's and Macy's have already signed up as anchor tenants, with the ultimate plan to create 1.5 million square feet of mixed-use development.  Not only would the Shops of Summerlin produce NOI for the company, but the presence of a true downtown would likely increase the value and desirability for the remaining residential lots to be sold as well.

Summerlin received an average of $78,000 per lot over the last three years, with 43,000 lots still remaining and after the completion of the Shops of Summerlin, there's a long runway to monetize this asset.

Operating Assets
Howard Hughes owns nine mixed-use and retail properties, seven office properties, a resort and conference center, a 36-hole golf course, a multi-family apartment building, two equity investments and five other assets that currently generate revenues.  These operating assets generated $62 million in net operating income for 2011, putting an 8% cap rate on these assets puts the value at $775 million (or $1.4B if you use the 4.6% average REIT cap rate), a significant source of value for a company with a current market cap of just under $3B.  Howard Hughes is investing in or repositioning many of these assets to improve their operating performance.

Ward Centers (Honolulu, HI)
Ward Centers could be considered its own MPC as Howard Hughes owns approximately 60 acres within a mile of Waikiki Beach and downtown Honolulu.  In October, Howard Hughes announced plans to redevelop the site and include over 4,000 condominium units (two towers) and over one million square feet of retail and other commercial space. 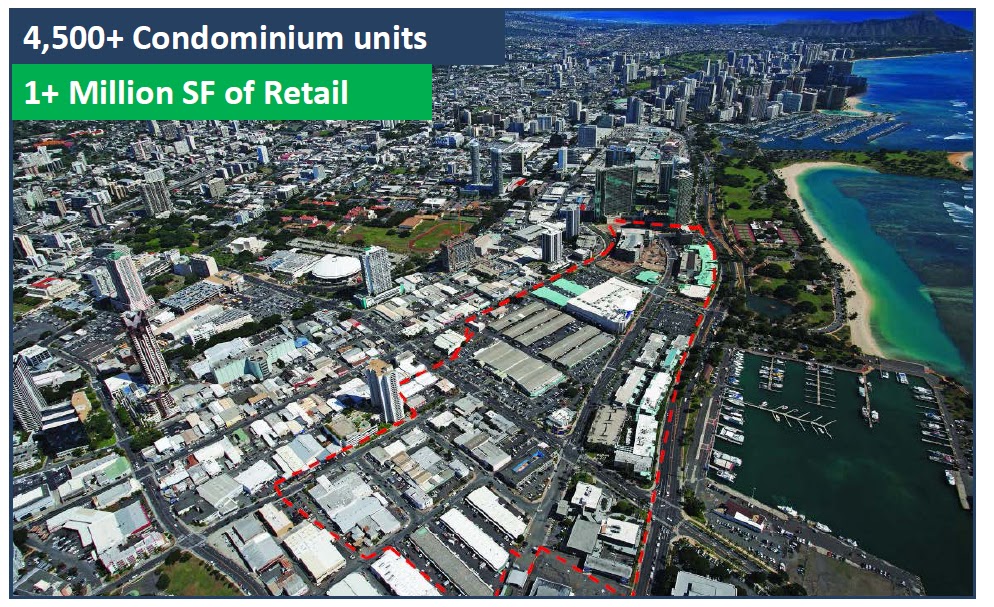 Hawaii's restrictive zoning laws (90% of the land is owned by the state) are going to put a major squeeze on development opportunities in Honolulu, with real estate prices there expected to jump 40% over the next several years.  The demand for luxury condos on the island is so great that Howard Hughes along with its partner sold out the ONE Ala Moana Tower in 29 hours.  In addition to the two residential towers, Howard Hughes is going to redevelop over one million square feet of retail.  Neighboring Ala Moana mall is the highest grossing mall in the country at $1500 per square foot (owned by GGP).  Currently, Ward Centers rents for $535 per square foot, so the redevelopment of Victoria Ward/Ward Village has the potential to unlock a lot of value for Howard Hughes.

South Street Seaport (New York, NY)
Howard Hughes has a long-term ground lease with the City of New York (expiring in 2072) that comprises three mid-rise buildings and the Pier 17 shopping mall located on the East River in Manhattan.  Howard Hughes recently announced the redevelopment of the site partnering with SHoP Architects of Barclays Center fame (infamy?).  Unfortunately, the South Street Seaport was damaged by Sandy in October, the company believes that insurance claims will cover most of the repair costs and lost income, however they reported only a $639,000 net operating income for 2012 (versus $5.65 million in 2011).  The South Street Seaport is only on the books for $5.9 million, so after the reconstruction and repurposing of the property, it's safe to assume this property is worth many multiples of its book value.

Other Operating Assets:
Mostly a collection of office buildings and Class B malls with redevelopment opportunities in different stages.  Many are being held on the books for well below market value.

Strategic Developments
Howard Hughes also has a collection of real estate assets and development rights that are not currently generating income, but have the potential to do so with investment.  Several strategic developments are currently under construction including office buildings (3 Waterway Square and One Hughes Landing) and an apartment building (Millennium Woodlands Phase II) in The Woodlands, ONE Ala Moana Tower in Honolulu which sold out in 29 hours netting Howard Hughes $47.5 million (versus a $22.8 million book value), The Shops at Summerlin, and an apartment building in Columbia, MD.

Once completed, many of these properties will become operating assets generating substantial income giving Howard Hughes additional cash flow to invest in other projects.

Insider Ownership and Management
Unlike PICO Holdings which I previously wrote up (no position at this time), Howard Hughes Corp's management has a lot of skin in the game.  Where else have you seen a management team pay the company to accept the job?  That's essentially what David Weinreb did when he became CEO, writing a check for $15 million dollars worth of warrants that won't expire for another 4 years, he's clearly incentivized to realize the value of Howard Hughes' assets.

The presence of Pershing Square and Brookfield Asset Management on the board is also a plus, as both are seen as long term investors with solid track records (despite Ackman's recent pain in both HLF and JCP).

Conclusion
There's a lot of moving pieces and your final value on the total value of their assets depends on a lot of assumptions, but I hope it's clear that Howard Hughes is materially mispriced.  Howard Hughes has a lot of options as it transitions from an asset based company to a cash flow based company in the coming years.  One option is spinning out some of the cash flow assets into a separate vehicle to take advantage of the tax advantage status of REITs (income only taxed at the investor level).

Disclosure: I own shares in HHC
Posted by MDC at 4:28 PM