Exelis and its Spinoff Vectrus

Exelis Inc (XLS) is an aerospace and defense contractor that was originally spun off of ITT Corporation (ITT) on 10/31/2011, and now Exelis is following suit by spinning off its shrinking mission systems business line into a new company called Vectrus (VEC) later this summer or early fall.  This is the classic move to separate the declining business to highlight the attractive remaining business.  Exelis will be more of a pure play aerospace and defense products contractor focused on a few select growth sectors.  Vectrus will be a government services defense contractor with falling revenues, but strong cash generation due to the low capital requirements and a variable cost structure.

Both Exelis and Vectrus will benefit:
With increased geopolitical tension defense contractors could once again see their revenues pick up from cyclical lows and Exelis represents an attractive event driven way to invest in that theme.
Vectrus
At the time of the Exelis spinoff from ITT, mission systems was the growth business and the rest of the business was flat or declining, times have certainly changed.  Shortly after the spinoff from ITT, defense spending came under a microscope with budget sequestration and the draw down of troops in Afghanistan.  In 2013 Vectrus had $1.5B in revenue with 100% of that coming from the U.S. Federal government, a full 92% from the U.S. Army, and 34% of 2013 came from Afghanistan which is quickly going away.  Revenues are expected to be down 25% in the mission systems business in 2014, with additional downward pressure in 2015.

Vectrus will operate in three main business lines: base operations (majority of the revenue), logistics, and network communications. 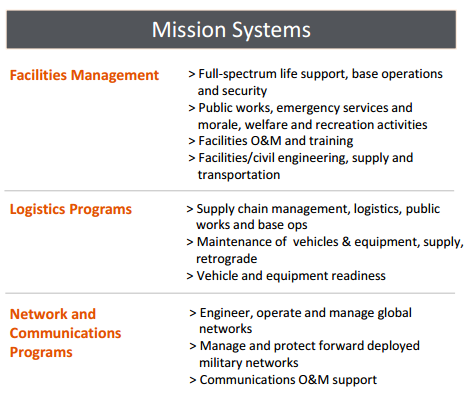 Major contracts include (69% of 2013 revenue):
Despite the industry headwinds, Vectrus can be an attractive business due to its low working capital requirements, much of their employment base are subcontractors attached to single contracts, as the contracts wind down so does a lot of the expense base.  Operating margins aren't great, at 4.0-4.5%, but with a renewed strategic focus on the business (classic spinoff reasoning) there will likely be some additional restructuring and cost cutting in the months after the spin is completed.

Leading Vectrus will be Ken Hunzeker, he has been the president of the mission systems business going back to the ITT/XLS spin, and is in for a nice raise.  Slightly more interestingly, Lou Giuliano will become the Chairman, he's the former Chairman and CEO of ITT and ran what would become Exelis at ITT for 8 years before becoming the President and COO of ITT in 1998, so he's intimately familiar with the business and the defense industry cycles.

Like many spins, Vectrus will be take out debt in order to pay a dividend back to the parent, here they're targeting 2.5-3.0x EBITDA, or approximately $130-150MM (although that's been a moving target down recently).  Government services businesses generate a lot of cash, I view debt (as long as its reasonable) as a positive here, management will likely be focused on paying down the new term loan and potentially refinancing to a better rate once the company becomes more seasoned.

Vectrus should have EBITDA of $50MM in '15 EBITDA, assuming they max out the debt at the 3x range, and putting a discounted 7x EV/EBITDA multiple on it gives you $200MM in market cap, a small slice of the $3B combined Exelis market cap.  I would imagine there will be some selling once the spin appears in Exelis investor's accounts as it will be a small unwanted orphan (it's worth about $1 per XLS share), so one strategy would be to wait for the spinoff to occur and settle out a bit before snapping up Vectrus shares on the cheap.

Exelis
Exelis has identified four "Strategic Growth Platforms" in which they want to focus and invest going forward: (1) Critical Networks;  (2) Intelligence, Surveillance and Reconnaissance Systems & Analytics; (3) Electronic Warfare; (4) and Composite Aerostructures.  The Vectrus spin allows Exelis to appear more attractive to investors, post-spin it will have higher margins and a diversified revenue base less focused on the Department of Defense. 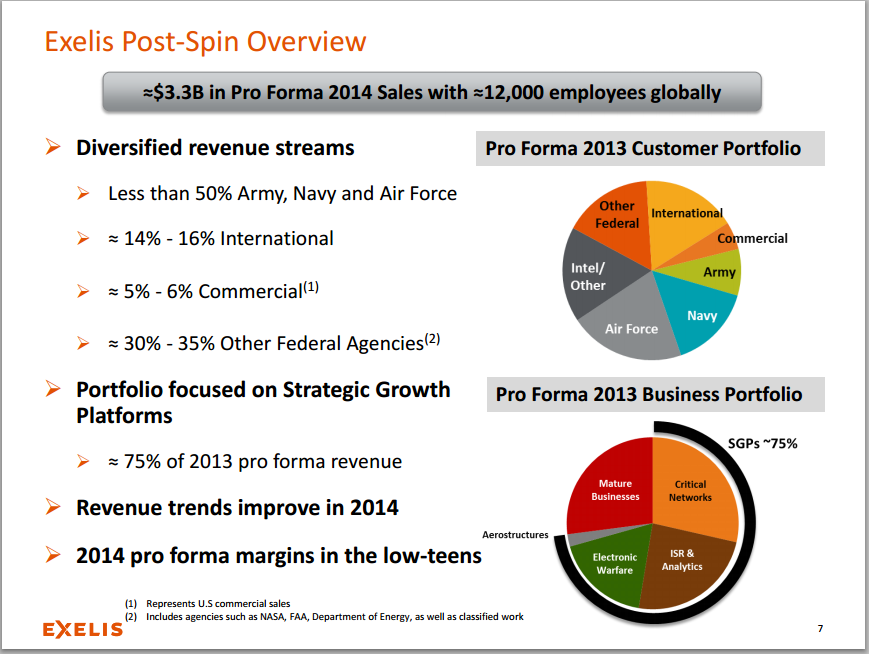 While top line revenue is down double digits YoY for the combined Exelis, the majority of the decline is the Vectrus business while the rest of Exelis is mostly flat with growth expectations going forward that should deserve a higher multiple.

Pension Liability
When Exelis was spun off of ITT, many called it a pension plan with a defense business attached to it, and that would have been a fair assessment.  Exelis has made significant progress on the pension (~$1.3 billion unfunded position as of the last 10-Q) and will retain and continue to service it after the spin.  The company has also frozen the pension plan of all future benefit accruals effective December 2016 and expects it to stop needing to make additional contributions to the plan after 2017.

Continued low interest rates have plagued companies with large pension plans because it lowers the discount rate at which a defined benefit plan calculates its future liability.  The lower the discount rate, the more current assets the plan needs to meet the future pension liabilities.  Tucked away in a transportation and student loan bill (MAP-21) was a pension funding relief provision that is likely going to get extended, it will reduce the amount Exelis will be required to contribute to its plans in the next several years from $225MM annually to $150MM.  This gives time for interest rates to normalize (bringing the discount rate up) and may reduce the overall contributions necessary by Exelis.

Post-Spin Cash and Capital Allocation
Vectrus will be paying Exelis a dividend of ~$150MM upon the spinoff giving the parent company amply liquidity when you consider the unused commercial paper program and credit facility with very little net debt.  Exelis anticipates maintaining their current quarterly dividend (2.5% yield), and could return additional capital to shareholders with their share repurchase program.  The flexible balance sheet also allows them additional room to invest in their Strategic Growth Programs and bolt on some smaller acquisitions like they recently did with the Orthogon airport management business.

To value a post spin Exelis I added the $1.3B pension liability to the net debt, along with the $150MM dividend from Vectrus, subtracted out the $50MM in EBITDA that Vectrus is expected to earn in 2015 and then added back the pension contribution to EBITDA.  If Exelis were to be valued at 8x this adjusted EBITDA measure, I come up with a ~$24 price target for the remaining business.  Add the additional $1 for Vectrus, and the combined business is worth $25 per share versus $16.41 at today's prices.

Risks
Summary
With the defense industry near a cyclical bottom, the spinoff of the Vectrus mission systems business provides an attractive event driven investment opportunity by creating a higher growth products business and a headwinds facing services business.  I'm initially going with a Joel Greenblatt like call option strategy to enter a postion, the spin will expose value in both the parent and the orphan, but I'm extending it out with a January expiration to allow Vectrus a little time to find a following in the investment community.  Depending on where Vectrus trades after the spinoff, I may pickup some additional shares at that point.

Disclosure: I own XLS calls, anticipate buying VEC shares sometime after the spinoff is completed
Posted by MDC at 8:24 AM