Back in April, I wrote up Colony Capital (CLNY) from the perspective of buying the preferred stock (read it for some background), today I'm going to take a shot at making the bull case for the common stock.  Colony has burned many real estate and value investors by going almost straight down since it merged with NorthStar Asset Management (NSAM) and NorthStar Realty Finance (NRF) in 2016. Back then it was going to be the next Brookfield Asset Management (BAM) by managing and co-investing in publicly traded REITs and private equity style real estate funds.  Last year, Colony announced a plan to focus on digital infrastructure, here's the quick new elevator pitch for Colony today:
On 8/7, Colony reported second quarter earnings and it was the first real chance for Ganzi to articulate his vision for the go-forward version of the company, and with it, released an investor day style presentation.  It's always a bit scary (be skeptical!) when you feel like a presentation was targeted directly at you, but Colony laid out the following few slides on why to invest in Colony:

During the quarter, the company took $2+B impairments to their legacy real estate holdings ("legacy" in this context means anything not digital, which is almost all of the balance sheet assets), basically kitchen sinked to reset the table for Ganzi, Colony spun it as covid accelerated the need for them to move quickly into their digital strategy given the demand on data/technology, but it also means potentially selling legacy assets in hard hit sectors to fund that pivot at an inopportune time.

At the top of slide is the digital pieces of the business, they primarily have two balance sheet investments in two separate data center business, the first is DataBank which they purchased for $186MM from Ganzi's DBH, possibly a less than arms length transaction but its also possible that they got a reasonable deal, who knows the business better than Ganzi?  The other thing to note is they've revalued their digital investment management company, Digital Colony, in this SOTP slide for the recent capital raise they did with institutional investor, Wafra, that bought 31.5% of Digital Colony for $250MM.  After that sale and a convertible bond offering which is now above the strike price, outside of the preferred stock, Colony has a net cash position at the corporate level.

The debt at the legacy assets is all non-recourse and generally asset specific, each asset/portfolio can almost be thought of as a call option in these times, the value of hotels or senior living facilities are clearly down, but depending on the pace of the economic recovery, these values post write-down might prove to be too low on certain assets.  In my preferred stock post, I wrote off the hotel assets completely and just assumed they'd hand back the keys, and that still might be the case as some industry rags have reported.  But Colony's hospitality portfolio is really divided into 7 separate entities (6 of which are reported under hospitality, 1 of which is under "Other Equity & Debt" as it was acquired through foreclosure), some of these are very likely going back to the lender, especially the 4 that have CMBS financing where their is little negotiating that can happen with the lender as the special servicer is generally bound contractually to foreclose.  The other 3 it's a bit murkier, but there's potential value there if things recover and Colony is able to hold on for another year or two before selling.  The healthcare facilities while down, seems salvageable to me, most of the properties in here are triple net lease and while covid has destroyed the senior housing sector (who in the right mind would place a love one in a senior housing facility right now unless that was the only option?), CLNY's rent collections have recently come in at 96%.

Another chunk of the legacy book is Colony Credit Real Estate (CLNC), a publicly traded credit REIT, they both manage the company and own 36% of it.  CLNC recently brought on former Ladder Capital (LADR, disclosure, still long) executive Michael Mazzei to take over the management of the company, I have a lot of respect for the Ladder Capital management team and see this hire as an important step in the turnaround of CLNC.  Historically, CLNC was originally thrown together from a pile of CLNY assets and a few NRF sponsored non-traded REITs, non-traded REITs are generally indiscriminate in what they buy in order to fund growth and increase the management fee to the external manager.  CLNC plans to eventually internalize although that plan is on ice for now as the stock trades for roughly half of book value (book value is a decent proxy for net asset value here).  CLNC has a large CRE CLO that they manage and use as balance sheet financing, to-date all the assets in that vehicle are current, its hard to tell if servicers are advancing funds or borrowers are using interest reserves to make payments, but given all the other assets and liquidity sources in CLNC, if a loan did go into default, they'd be able to buy the problem loan out of the CLO and maintain the coverage tests and all valuable cash flow to the junior tranches which CLNC owns.  Unlike other mortgage REITs, CLNC didn't have any securities portfolios liquidated due to margin calls, and given the current support credit markets are receiving, including possibly new supportive legislation, I can see a world where CLNC trades back up closer to current book value in the next 12 months.

Elephant in the room, most of the value in the legacy portfolio is in their "Other Equity & Debt" sleeve, they've slightly improved their disclosures here but its hard to know what's what and the overall value here: 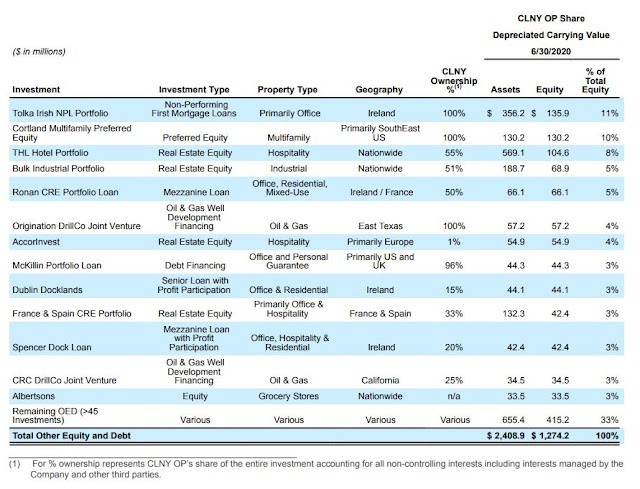 Some of this portfolio seems like nonsense in a REIT, like the partnerships with Sam Zell in oil & gas, and the rest of it sounds risky and heavily levered to commercial real estate quickly recovering from the covid-crisis.  I'm taking a bit of a leap of faith here that management has indeed brought the carrying values down to market.

Moving to the future, Colony explicitly calls out the opportunity to eventually be valued off of an earnings multiple, again, be skeptical!: 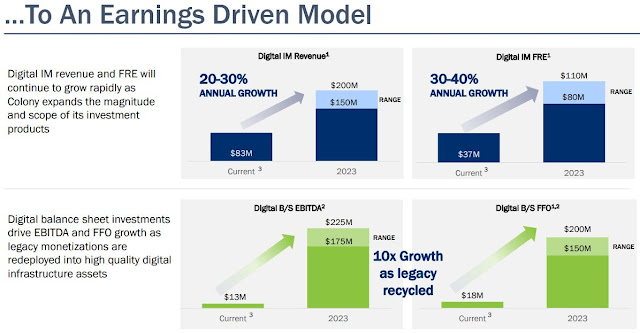 *If* Colony can meet these management projections, the stock is a multi-bagger from the mid-$2s.  I don't know the digital infrastructure space well (possibly at all), but obviously part of the trick here is buying assets in the private space below what public market investors are paying for the same assets.  The math works better at lower valuations, but it still could possibly be attractive here as the Colony gets a little added leverage by the management fees.  For example, if they only invest in 20% of the company via their balance sheet (as with DataBank) they get the benefit of their management fees across 100% of the asset, thus bringing down the proforma multiple paid.  It's not clean and what public market investors will pay up for immediately, but makes some logical sense.

Another interesting, potentially irrelevant data point, the stock was around $5 when Ganzi came on, but you can get a sense of what the business plan looked like at the time when looking at his incentive package:


In addition, in connection with entering into the employment agreement, the Company granted Mr. Ganzi a sign-on performance-based equity grant (the “Sign-On Award”) in the amount of 10,000,000 long-term incentive units in CCOC (“LTIP Units”). The LTIP Units will vest if the closing price of shares of the Company’s Class A common stock, par value $0.01 (the “Class A common stock”) is at or above $10.00 during regular trading on the New York Stock Exchange over any 90 consecutive trading days during the five-year period beginning on the Effective Date. The Sign-On Award is generally conditioned on Mr. Ganzi’s continued employment until the performance-based condition is satisfied.

A cool $100MM (not Elon Musk incentives, but still a nice chunk of change!) if he can reach the projections outlined in the investor presentation at current market multiples, which initially seem pretty out there, speculative sure, but the transformation seems possible to me.  That upside is mostly a jockey play, Ganzi isn't super well known outside of the digital infrastructure space, but he can now sort of be viewed as the new founder of "Digital Colony" (likely only a matter of time before the company adopts that name), spent the last 7 years building out DBH/Digital Colony, sure he did cash out partially when Colony bought his firm but part of the consideration was OP units at $5+ share price equivalent, plus you'd assume he's got some reputational capital behind the proforma company.  At the end of the latest quarterly call (transcript from Tikr.com), in a bit of salesmanship and possibly a bit (or a lot) of hubris, Ganzi compared Colony's stock price today with industry leaders like American Tower and how it once traded at $2 as well, AMT now trades at $250+.  A bit crazy, but maybe not?


Well, listen, thank you. It's been an incredible first half of the year. Once again, I want to thank our Board. I want to thank our Chairman, Tom Barrack. I want to thank our team. This is an incredible team we have here at Colony Capital. I think we unveiled some of that to you today. But this doesn't happen without a great team focused on continuing to find the right home for our legacy assets and continuing to grow our business going forward. I think we've made the case today why this is a great moment in time to buy Colony. And I'd ask all of you who've been investing in the sector for 2 decades, who've watched my career, to remember those sort of seminal moments when American Tower and Crown and SBA were all trading sort of sub-$2. Those were really interesting points in time to buy digital infrastructure. Colony today trades slightly under $2. I'd encourage you guys to look at your history books, think about this management team, think about our business model and think about where we're going.

A good question to ask is how else does Marc Ganzi get paid? He gets a few different pieces of revenue like the 10% of the incentive fee allocation, are his equity grants too far out of the money to be meaningful? He's clearly a rich guy with a big monthly budget (big polo player, owns/founded a polo club); lives in Boca Raton and is managing the business from there, town has a bad reputation among investors for businesses headquartered there.  Colony's common stock is a bit speculative from here, but I flipped my preferred stock for the common after the earnings call.  It rhymes with a few other investments over the years that have worked out well, basically a complex grab bag of assets that's moving into an easy understand company in a sector public market investors adore.