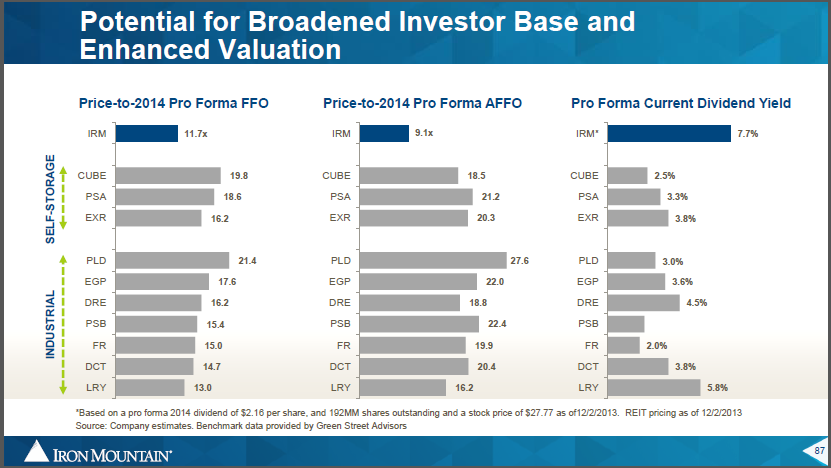 Disclosure: I own IRM calls
Posted by MDC at 2:59 PM No comments:

That was quick!  My last post was on Greenlight Capital's proposed transaction to utilize BioFuel Energy's net operating losses (NOLs) in a reverse merger of sorts with a real estate developer/homebuilder the hedge fund controls (JBGL Capital).  I noted at the bottom that I expected a wild ride because it seems like the current crop of momentum day traders had taken notice to this small float stock with a sexy name and were driving up the price without understanding the Greenlight transaction or reading the details of how BioFuel Energy is going to meet the $275 million price tag for JBGL Capital.

On Thursday, BioFuel's share price jumped almost 30% with no news and well above the maximum range of the rights offering:

Based on the initial terms of the rights offering above, anyone buying BioFuel Energy above $6.25 (80% of which is the maximum $5.00 of the rights offering) is guaranteed to face massive dilution after the rights offering is completed.  In order to fund the acquisition, BioFuel is going to have to issue 4-5x as many shares as is currently outstanding, at a maximum price of $5 per share, that's going to force the fair market value considerably lower than where its trading currently.  I don't have the trading mindset to participate in this kind of pump and dump, so I exited this morning at $8.15.  Slightly disappointed that I won't be participating in the rights offering unless things change dramatically, but maybe I'll get an opportunity again once the transaction closes.

Disclosure: No Position
Posted by MDC at 9:01 AM 5 comments:

Greenlight Capital and developer James Brickman are proposing that BioFuel Energy (BIOF) purchase JBGL Capital, a residential developer and homebuilder controlled by the two, for $275 million in a reverse takeover transaction to take advantage of the failed ethanol producer's $178.2 million in net operating losses.

BioFuel Energy was founded in 2006 in the middle of the ethanol craze.  The company operated two ethanol plants, one in Nebraska and one in Minnesota, which produced ethanol and related products for the company until this past November when they turned their assets over to the lender in a foreclosure.  After the foreclosure, BioFuel Energy is now a shell company with two assets, $10.8 million in net cash and the aforementioned $178.2 million in NOLs.

At year end 2013, hedge funds Greenlight Capital and Third Point owned 35.4% and 17.4% respectively of the company, one that's a rare investing black eye for each.  The NOLs are clearly valuable, otherwise the company would be liquidated and the $10.8 million would be distributed to shareholders, but the NOLs are only valuable if they can construct a transaction where there isn't a change of control in the mind of the IRS.  In comes the home builder transaction where Greenlight is already the lead investor.  There isn't much available about JBGL Capital on their website, but Greenlight would only choose an asset that would throw off taxable income to utilize the NOLs, so its reasonable to assume its fairly profitable.   I tend to like the residential real estate sector right now and think home builders will have the wind at their back for some time as we're still far below historical new home starts in the US.  The millennials generation will one day move out of their parents basement and start buying homes, just might take longer than most expect due to the financial crisis hangover and student loan debt.

Transaction Details, $275 million for JBGL Capital, compensated by the follow ways:
The debt is the most concerning of the above; 10% is awfully high in such a low rate environment, but I view this as Greenlight's preferred return for choosing the asset and being the company sponsor.  But after a few quarters of profitability, you'd assume the company could refinance the loan, but with Greenlight/Brickman being the lenders, would they be conflicted in facilitating a refinancing?

However everything else sets up pretty nicely, post transaction, David Einhorn will become the Chairman of the Board and James Brickman will be the CEO and join the board as well.  So Greenlight will remain the sponsor and presumably a long term shareholder of BioFuel in order to retain the NOLs, any "change of ownership" would disqualify the NOLs in the eyes of the IRS.

At the current price of about $5.30, you get around $2 per share in cash and the market is valuing the NOLs at $3.30 per share or only ~$17 million.  That's a reasonable valuation without any specific details of JBGL Capital which should come with the rights offering and subsequent filings.  BioFuel Energy, probably due to its name, former industry and low float, seems to now be on the radar of unsophisticated momentum traders which could make for a wild ride until the transaction is completed, but I took a very small starter position in the name (with the intention to participate in the rights offering) as I think there could be substantial upside once the dust settles.