Caesars Entertainment (CZR) is the largest gaming company in the United States which traces its roots back to the 1998 Hilton spinoff Park Place Entertainment.  Park Place later purchased Caesars from Starwood in 2000, eventually changing its name to Caesars Entertainment before being bought by Harrah's Entertainment in 2005.  A few years later in 2008, Harrah's was taken private in one of the largest private equity deals at the time for $30B by Apollo, TPG, and Blackstone.  While under private equity ownership, it switched the name back again to Caesars Entertainment.  In the near decade since the LBO, Caesars has struggled under a heavy debt load, unable to adequately invest in their properties or effectively compete for development opportunities in new jurisdictions.  It briefly appeared back on public markets before filing for bankruptcy in January 2015.  After a long and contentious reorganization process, Caesars will finally emerge from bankruptcy sometime in the third quarter.  Recently management has been out in front of the press and analysts telling their story as they drum up interest for the post-bankruptcy shares.

I'm buying the story and think reorganized Caesars presents an interesting opportunity for a few reasons:

Caesars Entertainment Corporate Structure
I won't pretend to know all the history or legal reasons for the division of the subsidiaries, other than to assume their private equity owners were doing everything they could to protect certain assets from creditors once it became obvious (which was soon after the buyout) that a restructuring would be coming. 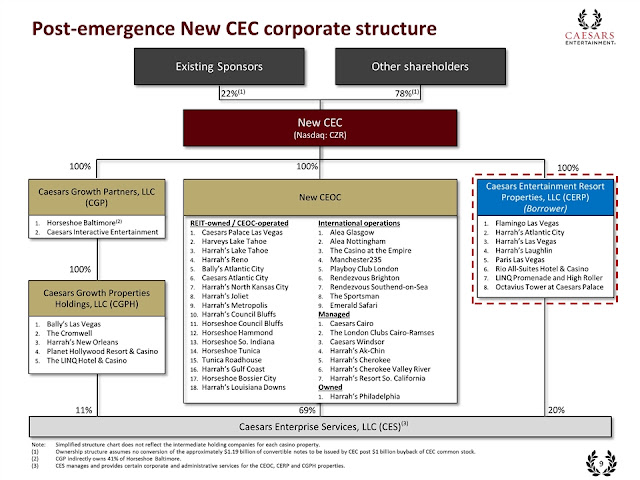 I pulled this off of a Caesars Entertainment Resort Properties ("CERP") lender presentation, so the emphasis on that subsidiary isn't intentional.  It's worth noting that the new Caesars will continue to own the real estate of Caesars Growth Partners ("CGP") and CERP which are primarily the Las Vegas properties other than Caesars Palace.  Also, CEOC is only entity in bankruptcy and as a result is deconsolidated on CZR's financial statements, which only adds to the confusion around the situation as there aren't clean SEC financials.

Caesars PropCo REIT, to be called VICI Properties, will include the 18 casino/resorts that were owned by CEOC but not CERP or CGP, plus a few golf course to be placed in the taxable REIT subsidiary likely for tax reasons (the "lemonade stand").  VICI Properties will additionally have the option to buy Harrah's Atlantic City, Harrah's New Orleans, Harrah's Laughlin and has the right of first refusal to the real estate of any U.S. (but outside of Vegas) property that Caesars might acquire or develop.  This REIT will look a lot like Gaming & Leisure Property Trust (GLPI), while casino resorts aren't easily convertible to another use in the case of obsolescence or default, the master lease structure with operating company tenants protects the REIT pretty well.  As long as the majority of the properties are stable and functional, and the operating company healthy, they'll receive their master lease payment plus a 2% step up annually.  I'm curious what the future holds for the REITs, including MGM's, it'll be interesting to see how they handle M&A going forward, thoughts here are welcome.

CZR/CACQ Merger
Another fun complication to the story is the merger of Caesars Entertainment (CZR) and Caesars Acquisition Company (CACQ), CACQ owns a stake in Caesars Growth Partners and previously Caesars Interactive which was sold in a separate transaction to a Chinese buyer.  The merger will happen in conjunction with CEOC emerging from bankruptcy to recombine the company, and give 100% ownership in CGP to CZR.  Lots of Caesars acronyms. 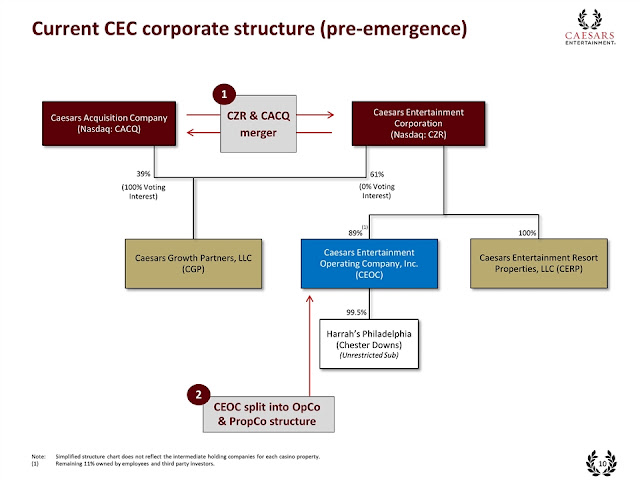 Valuation
The new Caesars Entertainment will look like a combination of MGM without the Asian operations and PENN/PNK but with significant Las Vegas exposure.  Caesars is also more diversified by revenue sources as Las Vegas transforms itself with less emphasis on gaming revenues and more emphasis on entertainment, nightlife, restaurants, shopping and experiences.

The recent analyst day provided a lot of good information in an Excel supplement, I used the below and just plugged in today's stock price with a discount via CACQ. 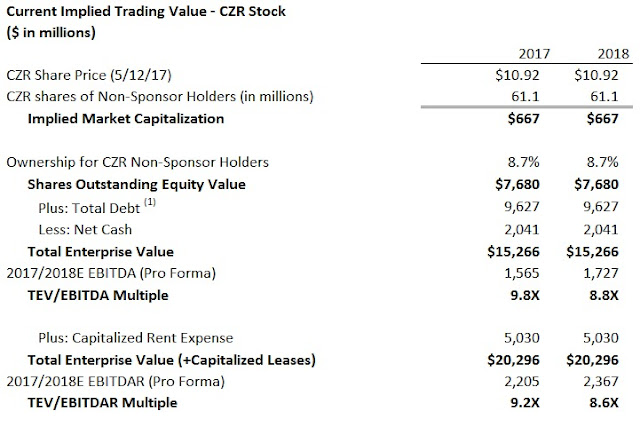 Comparing the new CZR's to peers:

MGM deserves a premium to CZR, but the question is how much?  I'd probably just guess 1-1.5 turns compared to CZR.  Given the leverage and valuation, even putting a 10x multiple on CZR would generate a low 20% gain from here without any benefit from the hotel renovation project, convention center, general economic tailwinds regional casinos have been seeing, or just Las Vegas momentum in general with the Raiders & NHL, housing market coming back there, etc.

Disclosure: I own shares of CACQ (PNK and TPCA also)

GenVec (GNVC) is another semi-failed biotech (and pretty tiny - only a $14MM market cap), GenVec is being purchased by Intrexon (XON) in a deal that should close by the end of the second quarter.  GNVC shareholders will receive 0.297 shares of XON + contingent payment right equal to 50% of any milestone or royalty payments received within 36 months after closing from GenVec's collaboration agreement with Novartis (NVS).  Assuming the deal closes as expected, the CVR is currently being valued at approximately zero.

Back in 2010, GenVec struck a partnership agreement with Novartis to discover and develop treatments for hearing loss and balance disorders.  The partnership centers around CGF166, currently in phase 1/2 trials, the goal of CGF166 is to regenerate sensory hair cells in the inner ear using gene therapy to restore hearing.  Hearing loss is a big addressable market and many of those suffering don't utilize hearing aids and the like due to social stigmas.  GenVec licensed the rights to this program to Novartis, in return, GenVec received a $5MM upfront payment, Novartis purchased $2MM of GNVC common stock, and GenVec was eligible to receive up to an additional $206.6MM in milestone payments.  To date, GenVec has only received $5.6MM in milestone payments, and none in the past two years.

Sorry if that's too small, but there's $201MM in potential milestone payments out there, plus royalties on any sales, the CVR will split any potential payments 50/50 with Intrexon.

Without knowing much about the probability of milestones being met (let's just go with a very low probability), the interesting thing about this CVR is its success or failure is in the hands of Novartis, a third party not involved in the merger.  The 36 month clock on the CVR doesn't directly relate to anything I can see in the Novartis partnership, so Novartis has less incentive to game the milestone dates, the 50/50 split with Intrexon puts the CVR on equal footing.  Within 36 months, we should know if there's something to CGF166 or not.

There's likely not much value in the CVR, but with a tiny market cap and a long dated non-tradeable CVR, I could come up with some behavioral arguments on why its being completely discounted.  Intrexon feels a bit scuzzy to me, they're highly promotional and did a weird faux spinoff earlier this year, so I'd recommend shorting out the 0.297 shares of XON for every share of GNVC to just synthetically own the CVR.

Thanks to the reader who sent me this idea after my INNL post.

Disclosure: I own shares of GNVC
Posted by MDC at 3:09 PM 17 comments: