PFSweb (PFSW, ~$280MM market cap) is reader suggestion to the recent theme of companies that have sold a major business segment leaving the proforma stub business looking cheap, and here again, the company is continuing to pursue strategic alternatives, which will likely lead to a sale of the remaining segment.

PFSweb has an interesting history, they started out as "Priority Fulfillment Services" but changed their name to "PFSweb" (as any e-commerce adjacent company did at the time) and IPO'd in December 1999, popping over 160% on their opening day, as you can imagine, it has been an ugly ride since the IPO.  Ostensibly the company helps enable mostly old line retailers with their ecommerce strategy and fulfillment operations.  This has historically been done in two business segments, LiveArea is their e-commerce consultancy/advisory business and the PFS business is some combination of a third-party logistics ("3PL"; warehousing, fulfillment, returns) and a business processing outsourcing ("BPO", call centers, etc) operation.

Somewhat unexpectedly, PFSweb sold their LiveArea business to a subsidiary of the Japanese conglomerate Dentsu International for $250MM in cash (roughly a 20x EBITDA multiple on LiveArea's 2020 segment EBITDA), the deal is expected to close this quarter and net PFSweb between $185-200MM in proceeds after taxes and fees.  Included in the press release is a line regarding the remaining PFS segment:

"With the divestiture of LiveArea underway, PFSweb has also engaged Raymond James to lead the exploration of a full range of strategic alternatives for its remaining business segment, PFS, to maximize shareholder value."

And from the investor presentation:

That all sounds like a sale to me, the remaining PFS business is in the hot 3PL space, I personally have a hard time distinguishing between what is really 3PL and what is just a BPO, how much of it is a commodity business, etc., it has almost become a buzzword like SaaS or cloud in the technology space.  But the industry has been a significant covid beneficiary with branded manufacturers and retailers scrambling to become more omnichannel and improve their ecommerce capabilities.

Look no further than the recent XPO Logistics spinoff, GXO Logistics, it was XPO's 3PL/warehouse outsourcing business that has taken off since the spin (~+35% in a month) and now trades at something like 15x 2021 EBITDA (I spent 5-10 hours on GXO, couldn't wrap my arms around it).  They're not an apples-to-apples comparison, GXO has something like 100x the warehouse/logistics space that PFS currently operates (about 1.6 million square feet spread across Vegas, Dallas, Memphis, Toronto, the UK and Belgium), but more just to illustrate the opportunity and growth investors are pricing into the industry.  This is a pretty fragmented industry, PFS is subscale (bloated SG&A expenses), seems like there would be any number of buyers that could fold it pretty quickly into their operations.

Here's the current proforma situation (PFSW is late on the 10-Q, noting they want more time to adjust the financials for the sale of LiveArea, so I could be off on this): 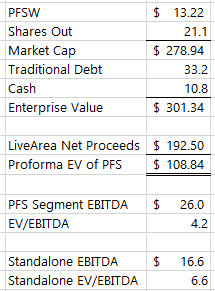 One question I had is how the company is presenting the remaining PFS segment, in the investor slide above they guide to 8-10% "standalone" adjusted EBITDA margins, yet in their quarterly segment reporting PFS did ~$26MM in LTM EBITDA.  I asked their outsourced IR, got sort of an unhelpful non-answer, but I'm assuming that standalone includes a portion (but it wouldn't be all) of their previous corporate overhead that was a bloated $20MM in 2020.  So on a segment basis (what a strategic acquirer might be looking at) the proforma PFS is trading for only 4.2x EBITDA.  For my back of the envelope valuation, I've assumed that some of that corporate overhead (going with a round 50%) really should be distributed to the segments.  They've hinted at moving some SG&A to the segments on earnings calls and mentioned in a recent 10-Q that an increase in property tax (sounds like an operating expense) bumped SG&A up.  The top row of each scenario is the EBITDA multiple assigned to the PFS segment.

As of the 10-K, PFSweb did have $56.5MM of NOLs, but based on the LiveArea sale, hard to know if there is any tax shield remaining for a sale of PFS, I'm backing into about a 23% assumed tax rate on LiveArea and applying it to PFS in the "Fully Taxed" scenario.  But of course there are ways to avoid the double taxation and simply sell all of the remaining PSFweb in a cash or stock transaction.  We also don't know what PFSweb plans to do with the LiveArea proceeds other than paydown their debt, similar to LAUR, I tried to map out what a tender offer might look like if they went down that path and used 1/3 of their proforma cash position to repurchase shares.  Just a guess and playing around with numbers.  But either way, assuming the LiveArea deal closes (make your own determination if that's a good assumption), then the remaining 3PL business is extremely cheap to acquirer, maybe just sort of moderately cheap as a subscale standalone, but should have downside reasonably protected given the industry tailwinds.

Disclosure: I own shares of PFSW

Email ThisBlogThis!Share to TwitterShare to FacebookShare to Pinterest
Labels: PFSweb

After my RVI post, a reader pointed me to Laureate, a setup that rhymes with RVI -- a large asset sale that is obscuring value in the RemainCo which will also likely be sold.

Laureate Education (LAUR) is a global for-profit education company that went private in 2007 (KKR in an LBO), was re-IPOed in 2017, and at the time of the IPO owned or operated over 70 universities across 25 countries, about half the business was in Latin America.  The IPO had a lukewarm reception and the company pivoted to selling their assets, usually at multiples that well exceed where public markets were valuing Laureate.  Today, the company has a pending sale for their U.S. for-profit school (Walden University), once that deal closes with Adtalem Global Education (ATGE, fka DeVry) in Q3, the company will have a net cash position of $1.66B and down to just five universities in two countries (Peru and Mexico) that management is guiding to $280MM in 2022 EBITDA against a $2.9B market cap ($1.25B EV adjusted for the Walden closing).

Laureate is not done selling assets, while Peru and Mexico are presented as continuing operations in their filings, they make it clear that they're still entertaining offers for both segments (transcripts courtesy of TIKR).

"...the decision to focus on a regional operating model in Mexico and Peru does not preclude further engagement with potential buyers for these businesses as we are committed to pursue the best strategy to optimize shareholder value."

"However, we will continue to explore strategic transactions for our remaining operations in both Mexico and Peru, and we'll pursue opportunities that can generate superior value for our stakeholders, net of friction costs versus retaining those operations as a publicly traded company."

The strategy of focusing on Mexico and Peru seems unintentional and more just the pace and sequence of asset sales.  It is unlikely that a smallish U.S. headquartered company providing higher education in Mexico and Peru will be valued properly or have much need to be public.  Management agrees, they've been consistent and clear in their belief that the stock price doesn't reflect the intrinsic value of the company, and their plans to return capital to shareholders to close this gap.  A few more snippets from recent earnings calls:

"In addition, I am pleased to report that our Board has approved an expansion of our stock repurchase plan by an additional $200 million, bringing the total authorization to $500 million. Since beginning the plan in November, we have repurchased approximately $250 million worth of stock. We continue to believe that returning capital to shareholders through stock buyback is very accretive use of capital for investors given the significant discount of our stock price versus the intrinsic value of the individual institutions in our portfolio."

"Let me now close out my prepared remarks by providing some guidance on the use of our excess liquidity. Our capital allocation strategy remains unchanged: first, support our business operations; second, repay our debt only if needed; finally, return excess capital to shareholders in the most tax-efficient manner possible.

...the most tax-efficient manner to return capital to shareholders is in the form of open market purchases, so share buyback, like the program we've just announced, as well as other means, such as a tender offer. So at this point in time, we are not thinking of distributing cash or excess cash to shareholders in the form of dividends. Obviously, that may change. But our priority is really to do it in the most tax-efficient manner."

The company has been a significant buyer of their own shares and that has likely continued as their share repurchase authorization was increased alongside their first quarter earnings release (we'll see how much on Thursday when LAUR reports Q2 earnings) and will presumably be increased again or in the form of a tender following the closing of the Walden transaction.

In my usual back of the envelope way, here's the simple EV for LAUR following the sale of Walden (due your own due diligence if assuming Walden will close is a good assumption): 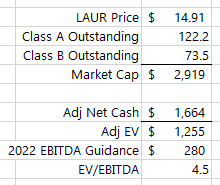 The 2022 EBITDA guidance includes corporate overhead, in 2020, the individual segments did $113MM in EBITDA for Mexico and $189.5MM for Peru respectively, any strategic buyer could likely cut the corporate overhead, so the EBITDA multiple is somewhere in the 4-4.5x range for proforma ongoing operations.  Their Brazilian segment was recently sold for close to 10x EBITDA.

And what might a tender offer look like?  I'm really just guessing here, but let's say they use roughly half of their net cash to do a Dutch tender and it gets done at $17/share, what might that do to the stock after an ultimate exit of the Peru and Mexico operations?  Below is a range of possibilities.

Looking at that scenario analysis, its probably best to think of the tender as a special dividend than shrewd capital allocation, although in the higher multiple scenarios it would begin to make a difference.

The big risk might be in the Peru segment, mostly for political reasons.  Laureate took a sizable ($418MM) write-down on their Chile segment in 2020 and sold it for a very cheap multiple (sub-2x EBITDA), in their words from their Q3 2020 earnings call, due to "the risks and uncertainties that the market perceives around operating higher education institutions in Chile given the current political and regulatory environment as well as the possibility of a new Chilean constitution that could come into effect as early as 2022."  Last month, Peru elected a new President, Pedro Castillo, that ran a similar far left campaign that investors fear will upend the economy with plans for a new constitution.  But maybe that's already priced in?  It could mean that a sale isn't imminent, instead the company waits for covid to fully get in the rear view mirror and more political certainty before selling the remaining businesses.  In the "Peru is only worth 2x" scenario, then the current market price is valuing Mexico at 8x, which is probably about right, hard to see a lot of downside here.

Maybe an interesting way to play this is via options?  Others investors have explained how to think about event-driven options strategies better than I can, but here it seems like an interesting setup, similar to ones I've had success with in the past.  The recent past volatility won't look like the near future where we potentially have several catalysts that could move the stock price significantly higher: 1) Walden deal closing; 2) continued share repurchases or a large tender offer; 3) sale of the remaining company.  I supplemented my common shares with some call options, specifically the December $15 strike price, these could be too short term, but ATGE expects the deal to close this quarter and that should give LAUR enough time to announce a capital return and/or another sale.

Disclosure: I own shares of LAUR and some Dec $15 calls