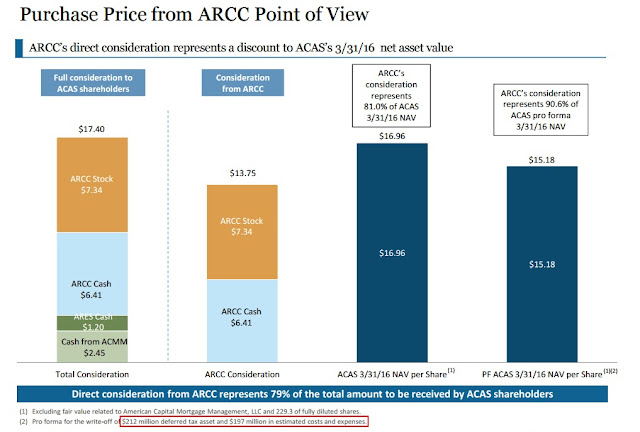 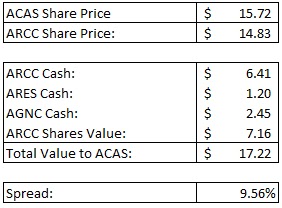 Additional Thoughts:
Disclosure: I own shares of ACAS
Posted by MDC at 3:41 PM 4 comments:

In the fall of 2013, regional casino operator Penn National Gaming spunoff Gaming & Leisure Property Inc (GLPI) to hold their real estate assets and lease them back to Penn on a triple-net lease basis where the tenant is responsible for all the maintenance, taxes, and insurance.  The idea behind the move was a simple one, the market places a higher multiple on net lease REITs than it does gaming companies, so by separating the two, value is unlocked.  More recently, MGM did a similar move with MGM Growth Properties, and Caesars is contemplating the same within bankruptcy, it's becoming the industry standard operating model.  However, the IRS is starting to take a harder stance on REIT spinoffs which may lead to more scrutiny and give an advantage to those like GLPI who are already operating as REITs.

Following the Penn transaction, many investors looked to Penn's closest rival in the regional gaming sector, Pinnacle Entertainment (PNK), and pressured them to do a similar real estate spinoff transaction.  Concurrently, GLPI investors had been pressuring the REIT to diversify their tenant base as nearly all their casinos were leased back to Penn, a more diversified tenant base would lead to a higher valuation.  In July 2015, Pinnacle and GLPI came together in a deal that closed last month where GLPI acquired all of Pinnacle Entertainment and then simultaneously spunout the operating business under the same PNK ticker, creating "new" Pinnacle.

In the transaction, Pinnacle shareholders received 0.85 shares of GLPI and 1 share of new PNK for every share of old PNK they owned.  In effect, its a special dividend that recapitalized the company, much of the old debt moved to GLPI with the real estate and was replaced by a big capitalized lease payment.  The master lease has an initial term of 10 years, plus 5 options periods at Pinnacle's option for 5 years each.  The lease payment functions as an interest payment, except Pinnacle doesn't have to repay or refinance the debt, making it less risky in the event capital markets shutdown for a period of time.  While the lease is essentially debt, and I would treat it that way, it's not quite the same and when looking at the implied leverage ratio including the lease.

New Pinnacle Entertainment
The company now operates 15 properties (casinos, racetracks, hotel combinations) across 7 states but is relatively concentrated in Missouri (both Kansas City and St. Louis) and Louisiana with no exposure to Las Vegas or Macau as its larger peers.

Their biggest revenue generating casino is the L'Auberge Lake Charles in Louisiana that opened in 2005, in 2014 the Golden Nugget Lake Charles opened up next door creating competition, but in a "frenemy" sort of way as it's expanded the market, creating more of a regional weekend destination.  Visitors from nearby Houston (and it's energy economy problems) like the ability to easily go from one venue to the next, both have golf courses, spas, complementary restaurants and shuttles between the two properties.  In listening to recent earnings calls across the sector, gaming appears to finally be picking up around the country as consumers have more money to spend and have been moving away from retail to more experienced based spending.

One benefit of having casino REITs is their ability to acquire gaming assets at accretive prices given their low cost of capital, turn around and sell the operations to someone like Pinnacle and make the deal a win-win for both, essentially doing the REIT spinoff in reverse with the same benefits.  GLPI is doing just that with a racetrack and casino property, The Meadows, in Pennsylvania where it paid $440MM in December and sold the operations to Pinnacle for $138MM, which will close in the third quarter.  Ideally, the casino REITs aren't going to want to run the casino operations (GLPI has two they operate for spinoff tax reasons), but they'll be the most flush acquirers of properties that come up for sale giving operators like Pinnacle a source of new deals.  For The Meadows specifically, Pinnacle purchased the property for 6.4x TTM EBITDA and believes they can get an additional $10MM in synergies as it has been run as standalone business dropping the multiple below 5x EBITDA.

Proforma for The Meadows acquisition, Pinnacle did $645MM of TTM EBITDAR (R is rent to account for the capitalized lease expense), they have $130MM in cash, $968MM of conventional debt, and the lease obligation is $2.78B for a total enterprise value of $4.33B or an EBITDA multiple of 6.7x.  Penn National Gaming, it's closest peer in both markets and structure, trades for 7.4x EBITDA, which doesn't sound like a big difference, but when they're both as levered as they are PNK's market cap has some catching up to do.  Without the lease obligation and subtracting out the related rent payments, Pinnacle trades just under 6x EBITDA.

Management in their roadshow presentation also laid out the case that Pinnacle was undervalued based on FCF (although a highly levered free cash flow).  On a free cash flow basis bumping it up to PENN gets closer to a $13-14 share price, still a fairly significant disconnect, it's probably worth somewhere in between the two metrics at $14-18 per share.

Overall, we have a slowly improving economy that's bring back some discretionary spending, a quality management team that has consistently driven margin improvements across their properties paired with some spinoff and odd accounting dynamics that are creating a temporary (hopefully) discount in Pinnacle's share price.

Risks:
Disclosure: I own shares of PNK
Posted by MDC at 1:26 PM 9 comments: