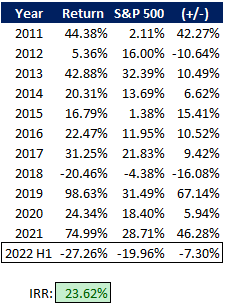 Thoughts on Current Holdings
As I have during tough periods before, here's a quick summary thesis of each of my current holdings (in mostly alphabetical order):
Additionally, I have a several true liquidations, both Luby's (LUB) and HMG Courtland (HMG) went non-traded during the first half of 2022, the third, Sandridge Mississippian Trust I (SDTTU) rarely trades and typically only in tiny amounts as we await the dismissal of a shareholder lawsuit.  The primary asset at HMG was recently sold, hopefully we'll see a distribution this year, but there's limited to no disclosures now, so a bit in the dark.
Sold positions
Opportunity Cost Sales: 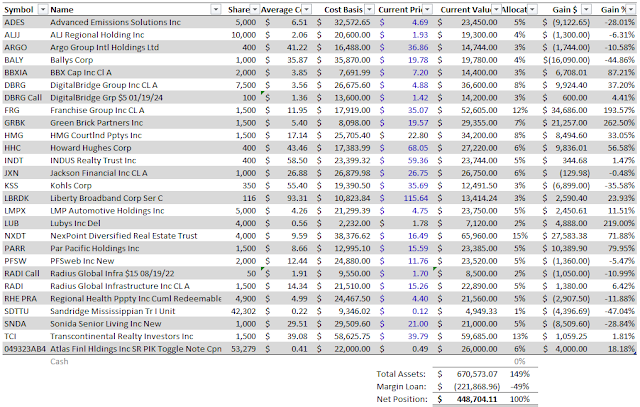 Cash was withdrawn in early April to pay for 2021 taxes, leverage is high as I got smoked the last two months, but I can move funds over to this account if necessary to plug the hole.
As usual, always looking for new ideas, feel free to share yours or critique mine.  Thanks for reading and enjoy your holiday weekend (for U.S. readers).
Disclosure: Table above is my taxable account/blog portfolio, I don't manage outside money and this is only a portion of my overall assets.  As a result, the use of margin debt, options, concentration doesn't fully represent my risk tolerance.
Posted by MDC at 4:51 PM 37 comments:

Over the weekend, news came out that Transcontinental Realty Investors (TCI) and their partner, Macquarie, sold the assets inside their Victory Abode Apartments joint venture for a total of $2.04B (which was the original thesis from my December 2021 post for some background).  On an annualized Q1 2022 NOI basis the sale was done at a 3.85% cap rate, on a forward basis it is probably a bit above 4% as rents are resetting considerably higher in this sunbelt portfolio.  Given the current economic backdrop, that price seems like a great exit for TCI as I was nervous shareholders would be disappointed with no sale or one around the recent $1.4B appraised value (as disclosed on p13 of their recent 10-Q).  The sale is a bit complicated in that 53 properties were sold in total with 7 of those properties being sold back to TCI at the same valuation as the rest of the portfolio.  After paying off mortgage debt and transaction fees, TCI expects to net $320MM in cash from the sale after $100MM they've earmarked for taxes.

The sale is expected to close within 75 days (~early September), post deal closing TCI will screen extremely cheap on a price to book basis as their equity VAA joint venture is being carried on the books for $50.6MM while they're netting $320MM in cash plus the value of the 7 holdback properties, that delta in my estimation almost doubles the book from $45/share to $86/share.  Shares trade for around $43, even after the sale announcement, about 50% of proforma book value.

The sale press release gives limited details, but using the Q1 10-Q and some swag math, we can back into the value of the 7 holdback properties. 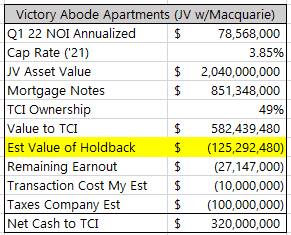 A $2.04B topline price tag, minus the $851MM of mortgage debt, nets $582+MM in value to TCI.  Then backing out the remaining earnout owed to Macquarie, some transactional costs and the company's estimate of taxes, the plug to get to $320MM is about $125MM in value for the holdback properties.  I'm probably off there, so as always, correct me if I made any major mistakes.

Then Pillar, the external manager owned by the controlling shareholders, is due an incentive fee for the capital gains related to the VAA sale, the math is challenging and difficult to model out, but they're due 10% of any capital gains above a 8% annualized hurdle rate.  TCI estimates their tax rate at 21%, if the company's estimate of $100MM in taxes is accurate, let's just guess the incentive fee is roughly $35MM for our purposes.

With some simple math, adding the net cash to TCI, estimated value of the holdback properties, subtracting out the incentive fee and the previous carrying value of the JV partnership.  I get the below proforma book value.

Once Q3 earnings come out and book value is reported (November time frame if it closes in Q3), maybe some quantitative strategies take notice?

Of course, book value tends to understate the value of real estate companies due to depreciation and historical cost factors.  Below I've taken most of TCI's balance sheet and pulled it apart, I'm missing a couple things in their restricted cash and their other assets, there's limit disclosure around those two line items.  I've put market multiples on the multifamily and commercial segments, grossed up their land at their Windmill Farms development to approximately equal what the going rate for their acreage has been recently.  I get a little under $100/share in NAV, which is probably on the conservative side. 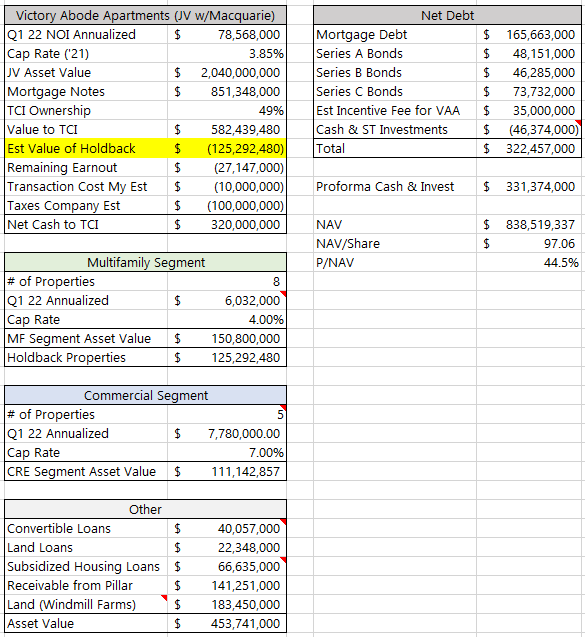 One potential source of hidden value is in their convertible loans, here they lend money to developers with the option to convert the loan to 100% equity ownership in the properties.  The terms aren't disclosed but 6 of the 9 development loans in that bucket are on stabilized assets.
But the big question remains, what will TCI do with the proceeds from the asset sale?  In the press release, the company says:

the Company intends to use of most of the cash flow it will receive from the aforesaid in subsection 3 above to make new investments and to expand its multifamily residential property portfolio.

That doesn't sound too promising for the prospect of minority shareholders being bought out and likely why it didn't pop on the JV sale news.  But the controlling shareholders own 85% of TCI (mostly via ARL), leaving ~1.3 million shares in the float, if insiders offered shareholders $65 that would be an $85MM check, well within reserving "most of the cash for new investments" and would also transfer $45+MM of value to insiders if my NAV is believable.  They've never had this much liquidity before, the patriarch died three years ago, Pillar Asset Management has a new CEO that has inherited this crazy structure, maybe we see something happen once the deal closes.
Other thoughts/items:

Disclosure: I own shares of TCI

Franchise Group (FRG) is one of my largest positions, naturally I feel obligated to post something on the headline grabbing news that FRG is the apparent winner of the auction for struggling retailer Kohl's (KSS).  Kohl's would be a transformative acquisition, FRG is currently a $2.7B enterprise value company and press reports have them paying $8B for KSS ($60/share).  FRG is currently guiding to $450MM in 2022 EBITDA, TIKR has the consensus KSS estimate at $2.1B.  The combination of FRG being smaller than the target, little known outside of certain value/event-driven circles and fears of credit markets tightening seem to have the market doubting this deal gets done (KSS last traded for $45.75).  But I have faith in CEO Brian Kahn, FRG entered my portfolio as a special situation when it was then called Liberty Tax, which went about a complicated merger and tender offer transaction that looked novel and interesting from an outsider perspective.  Here is FRG's most recent investor presentation for what the company looks like today, a lot has changed, including FRG selling the original Liberty Tax to a SPAC (sponsored by NexPoint).  My thesis in the last two years has mostly revolved around "in Kahn we trust", given the news leaks around credit providers being lined up, it appears this deal is getting done.  I've added some KSS as a small speculative merger arbitrage position alongside FRG.

Taking a few steps back, in April, news broke from Reuters that FRG was joining the bidding for struggling retailer Kohl's (KSS), I was a bit surprised but not entirely, Kahn is a creative deal maker and likely looks at many acquisition opportunities that don't fit Franchise Group's stated strategy of "owning and operating franchised and franchisable businesses".  My guess is the "franchise" part is more aspirational than truth, it is a generic name and strategy, they just look for attractive deals.  Kohl's certainly doesn't seem to fit the franchise mold, hard to imagine someone operating a department store as a franchise, but the deal does resemble other recent FRG acquisitions as the non-core assets could be used to finance the transaction.

Last November, FRG entered into a transaction to buy southeastern furniture retailer W.S. Babcock for $580MM.  Subsequently, FRG went on to sell Babcock's credit accounts receivables to B Riley (RILY) for $400MM, the retail real estate for $94MM, and the distribution centers and corporate headquarters to Oak Street Real Estate Capital for $173.5MM.  More than paying for the acquisition with asset sales and still expecting to receive $60MM in proforma LTM EBITDA.  A similar transaction seems to be in store for Kohl's, the department store chain owns their corporate headquarters, almost all of their distribution and e-fulfillment centers, and own 410 of their retail stores outright and another 238 of them owned but on ground leases.

Reports have FRG re-teaming up with Oak Street Real Estate Capital (part of Blue Owl's platform) to provide $6B in financing based on the corporate headquarters and distribution facilities real estate (might also include the retail real estate, so my 6% cap number below might be too low), and $2B (fuzzy, Seeking Alpha number) from Apollo in non-recourse Kohl's level term loan financing, with FRG kicking in the additional $1B via an upsized term loan.  Apollo isn't the ideal lender, but since they're a direct lender and aren't relying on syndicating the loan immediately like a large regulated bank, the financing seems more secure in the current uncertain environment.  It is an interesting structure, FRG is using no equity, financing it all with debt and will fully own a levered equity stub KSS.

Putting together a quick back of the envelope proforma, I come up with the below:

As always, probably a few mistakes above, feel free to point them out, and obviously, this is all excluding the capitalized leases which is real leverage even if it is non-recourse, but even if you did an EBITDAR valuation, the proforma company would be extremely cheap.  But I think it shows the creativity of Kahn and FRG, they're creating a diversified series of levered bets via non-recourse sale leaseback financing.

Disclosure: I own shares of FRG and KSS