I haven't posted in a while, been mostly idle the last month or two, but I thought I'd sum up some additional thoughts on Green Brick Partners now that the deal has closed, 9/30 proforma results came out, and the company hosted its first conference call as a home builder.

The headline Q3 results were down across the board, but with a relatively small home builder, I think it's safe to expect lumpy earnings results quarter to quarter.  With maybe only 25% of the shares outstanding in the float, Green Brick is essentially a private company and can be managed in a way that puts the long term results ahead of meeting estimates and smooth out earnings.  I was a little surprised to see as part of the deal closing that Green Brick took down the entire $150MM expensive term loan from Greenlight, but that gives the company approximately $40MM in cash to grow the business, especially in its two large communities coming online in 2015.

Below is the breakdown of the company's communities and lot position as of the S-1: 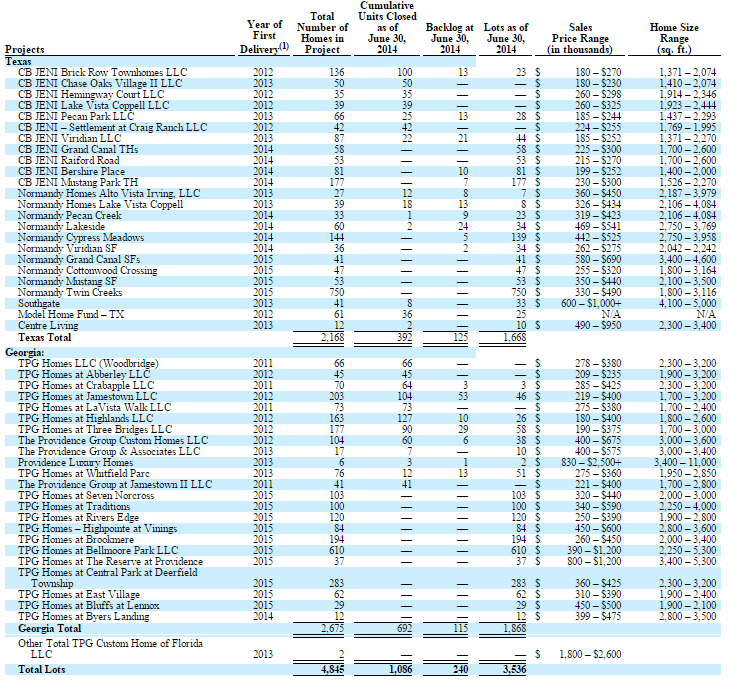 25% of the company's assets are in the Twin Creeks and Bellmoore Park communities that come online in 2015 and have a 6-8 year build out runway.  Additionally, there are several mid-sized communities debuting in Atlanta next year that add up to a little more than another Bellmoore Park.  In total, 75% of their lot inventory is in communities that will start delivering in 2015, making the initial 50% revenue jump buried in the company's management projections seems more plausible.

But with that said, the current stock price looks a bit stretched, based on the proforma numbers, Green Brick has a book value of about $156MM with a full allowance for the deferred tax assets, so at $8.85 its trading for 1.7x book, a little rich.  Or if you assume a 15x earnings multiple, the market is baking in $0.59 per share, which is a little higher than my adjusted earnings estimate I made in September that included cost cuts, term loan refinancing, etc., so the market is likely a little ahead of itself there as well.

Jim Brickman
The other interesting piece of this story is Jim Brickman.  Being backed by Greenlight and Third Point will entivably generate some headlines, but Jim Brickman is really the jockey we're betting on, so who is he?  Back in 2002, David Einhorn presented a short thesis on Allied Capital, a large BDC that had a lot of toxic assets hidden underneath the surface, but still managed to pay a high dividend and attract a loyal retail investor base.  David Einhorn ended up writing a book "Fooling Some of the People All of the Time" about his journey as a short seller in Allied, in the book Brickman plays a central role as he independently researched Allied and came to similar conclusions regarding their faulty asset base.  Below is the way David Einhorn introduced Brickman:


"However, a benefit of publicly discussing Allied was hearing from others.  Jim Brickman, a retired real estate developer from Dallas, introduced himself by e-mail.  Someone had pointed him to Greenlight's analysis because of his background in SBA lending... Brickman's e-mail began a long dialogue.  While I've spent more time on Allied than I can quantify, Brickman has spent much more; he is retired and his kids have grown.  As he sees it, "These people believe they are above the law."  He has become an expert at searching public records, analyzing information, and has been a major collaborator in identifying problems at Allied and BLX.  He is one of the best forensic detectives I have ever met." p137-138

Brickman was also very active on the Yahoo! message boards detailing his findings on Allied, The Wall Street Journal picked up the story and wrote a front page piece about him in 2004: A Retiree in Texas Gives a Firm Grief With Web Postings

I'm an avid golfer, but I find the line about getting bored playing golf as an early retiree great, just the kind of person that I want to be invested alongside.  You also get the strong sense that he created JBGL/Green Brick very opportunistically, the financial crisis lead to such dis-allocations in the real estate market that he couldn't help himself but to jump back in and restart his career.  Says even more that a message board poster built a strong enough relationship with a highly respected hedge fund manager to seed him with millions of dollars to start JBGL/Green Brick.  Pretty fascinating story.

So that's probably it on Green Brick for a while, it's up 50% over the last couple weeks and is no longer obviously cheap, but with such a small float, I wouldn't be surprised to see it become a good value again, keep it on your watchlist.  I'm going to just hold my position for now as I don't like booking short term taxable gains this late in the year, but wouldn't fault people for selling some here.  I like the long term setup and could see Green Brick being acquired by a larger builder in a few years once the NOLs are used up and Brickman wants to retire again.

Disclosure: I own shares of GRBK
Posted by MDC at 1:00 PM 7 comments: