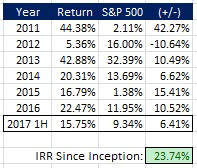 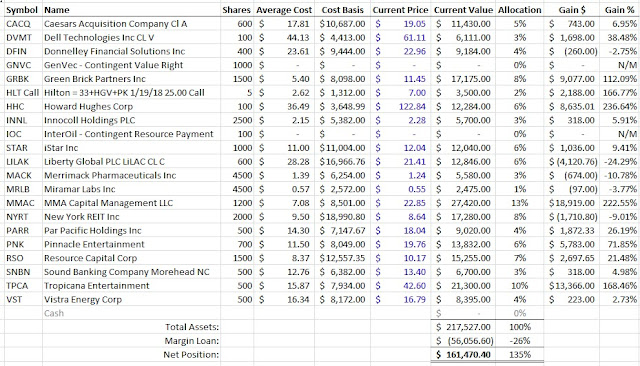 Disclosure: Table above is my blog/hobby portfolio, its a taxable account, and a relatively small slice of my overall asset allocation which follows a more diversified low-cost index approach.  The use of margin debt/options/concentration doesn't represent my true risk tolerance.
Posted by MDC at 11:00 PM 34 comments:

Over the last couple months I've been developing a basket of small broken biotechnology companies that all peaked around the sector's euphoric days in 2015 only to be forced to sell themselves more recently to larger companies as their funding has dried up.  Merrimack Pharmaceuticals (MACK) is one such company, they're focused on developing therapeutics for the treatment of cancer, in 2015 their first commercial product was approved by the FDA, Onivyde, a second-line treatment for those with pancreatic cancer.  Merrimack has struggled to market Onivyde effectively, its current addressable market is rather small as its not approved yet for front-line treatment, and its a difficult proposition to scale a sales force from nothing quickly and efficiently.  Add in the expensive nature of conducting clinical trials for the remaining cancer drugs in their pipeline, and it became clear that Merrimack needed to raise cash quickly.

So Merrimack sold their commercial business in Onivyde (along with a generic version of Doxil) to Ipsen (IPSEY) for $575MM in cash at closing, $33MM in near term milestone payments related to Onivyde sales through their licensing agreement with Shire (originally Baxalta), and up to $450MM in contingency payments based on additional regulatory approvals for Onivyde.  Following the sale, the company's plan was return cash to shareholders via a special dividend, pay off most of their debt, and refocus the company as a development stage biotech again.  The deal closed in early April, a $140MM special dividend was paid and their senior notes have been redeemed.  Today the company's market cap is roughly $200MM, or about the same as net cash following the closing of the Onivyde sale and resulting special dividend.

Merrimack 2.0
The company will now have a few different shots on goal, to be clear, this is all very speculative at this point and I know very little about the chances of any of these milestones being reached or the drugs in their pipeline ever being approved and commercialized.

Merrimack's board of directors has committed to passing through to shareholders any payments received net of taxes related to the Ispen deal in the form of special dividends.  In essence, these will function like contingent value right payments, but they're stapled together with the common shares and the company could go back on their word and find other uses for the cash in the future.

The three milestone payments are as follows:

There doesn't appear to be a deadline on any of these, at least one that's worrisome, that's good as it prevents Ipsen from delaying the approvals until just after the milestone date expires.

Milestone 1 is in a phase 2 trial, milestone is just beginning a phase 3 trial, and milestone 3 has a couple in phase 1 or beginning stages of phase 1 trials, translation, all are probably years away from potentially materializing.  Merrimack's financial advisers in the transaction estimated the probability weighted NPV of Ispen's offer at $685MM, with $575MM upfront and the Shire milestone payments of $33MM likely to hit this year, the bankers put the NPV of the contingency payments at roughly $77MM.  Seems fairly reasonable assuming a low-to-mid probability on either 1 or 2 being met in 3-4 year time and then discounting that back pretty heavily.

As part of Merrimack's restructuring, they've narrowed their pipeline to the three most promising anti-cancer products which they plan to focus their attention now as a new development stage company:

These three are also pretty distant catalysts, MM-121 has failed three phase 2 trials in non-small cell lung cancer, ovarian cancer, and breast cancer, so they're running out of options for that drug.  I'm curious to hear others thoughts on these three programs and their prospects as the company even after the restructuring is only funded through the end of 2019 - developing oncology drugs is extremely expensive.

Merrimack also has convertible debt outstanding, as part of the Ipsen deal the company eliminated their senior notes but conveniently left out any mention of their convertible debt, the convertible holders were understandably unhappy with the company.  Merrimack sold off their one commercial drug, bypassed them and distributed cash to shareholders, reducing the collateral backing the convertible notes which significantly increases the probability of default.  Bondholders are suing the company and as a result, Merrimack escrowed $60MM -- or about the amount it would take to redeem the upset bondholders.  The convertible bonds might be an interesting special situation in their own right, they trade in the upper 60s, way out of the money with a strike price of $6.25, have a 4.5% coupon, and if the lawsuit is successful they could be redeemed at par by year end.  If Merrimack is successful however, then the $60MM (or $0.45/share) will be distributed to shareholders as an additional special dividend.

Prior to the special dividend that's already been paid, MACK was trading between $3.30-$3.70 per share, after the $1.06 dividend it sold off down to $1.44 as of today, so roughly $0.80-$1.20 has come off the stock price for no other reason than the asset sale was completed and the dividend was paid.  There are a lot of upset retail shareholders and other day trader types in the stock, but it looks to be cheap and some forced selling happening after the restructuring has taken place as holders reassessed whether they wanted a pre-revenue stage biotech -- its almost like old spinoff selling dynamics taking place after the dividend was paid.

But at net cash, with new management taking over who were just issued a new options package, and the possibility of future contingent payments related to Onivyde, Merrimack seems like an another interesting speculation to add to my broken biotech bucket.  It'll be about 3 years before we know how this bucket turns out and that's likely a big part of the discount, but I think/hope I have the patience and ability to wait it out.

Disclosure: I own shares of MACK
Posted by MDC at 3:53 PM 15 comments: