I received the Par Pacific Holdings (PARR) annual report in the mail this week and thought it made sense to revisit my initial thesis in an updated post now that I've spent more time on the company in the past 20 months I've owned it.  Last fall Par Pacific changed the holding company's name from Par Petroleum, and renamed their Hawaiian operations Par Petroleum, which coincided with Bill Pate being appointed CEO and signaling the future direction of the company.  Par Pacific traces its roots back to 2012 when it was known as Delta Petroleum, a failed natural gas producer that went through bankruptcy and ended up in the hands of creditors, the largest of which was Sam Zell's organization through the Zell Credit Opportunities Fund.  In the reorg, $265MM in debt was converted to equity and the $1.4B in net operating losses were preserved giving Par a significant tax shield as they pursue an acquisition strategy.

Sam Zell built his reputation and wealth as a distressed investor, and with much of the energy industry in distress, Par Pacific Holdings is a way to invest alongside him and his management team in an environment that should see plenty of attractive deal opportunities.  The bulk of Par Pacific today was created through two acquisitions of refining and retail assets in Hawaii.  In 2013, they bought Tesoro's Hawaiian operations for $75MM plus a $40MM earn out and in 2015 they paid $120MM for Mid Pac Petroleum (primarily retail locations).  Last year alone these assets generated $110MM in EBITDA.  Distress in the upstream oil and gas sector is migrating down to pipeline and retail players, Par Pacific's main focus going forward.

Par Petroleum: Refinery, retail distribution network and related logistics assets located in Hawaii.
Laramie Energy: A minority interest in a privately own natural gas exploration and production company located in the Piceance Basin in Colorado.  This started as a legacy asset of Par's predecessor Delta Petroleum.
NOL Tax Asset: $1.4B in net operating losses that can be used to offset future taxable income.
Valuation:
Below is a quick and dirty valuation for Par Pacific, refiners trade for 4-6x EBITDA, midstream trades 12-15x EBITDA, and retail seems to trade around 8x EBITDA.  For Laramie Energy, it's probably simplest to use the equity method book value; I'm thoroughly ignorant to how oil and gas companies are valued.  If anyone has any specific thoughts on Laramie's value, I'd love to hear them.

At current prices, you're paying a cheap to fair price for the current assets and you get the acquisition runway/management as an upside option.  But I understand if non-shareholders would want to wait to see the next acquisition, it could create a better buying opportunity especially if it's paired with a rights offering.

Additionally, it seems like once a year the stock tanks for no apparent reason, in the summer of 2015 the company filed a shelf registration per the Shareholder Rights Agreement with Zell and other large shareholders which gave them the option to sell, but didn't actually mean they were going to, the stock sold off as if everyone was exiting and it went on to recover fairly quickly.  Shareholder Rights Agreements are one of those filing events to look for as some people sell first and ask questions later.

Risks:
Disclosure: I own shares of PARR

The bidding war for Starwood Hotels (HOT) between Marriott International (MAR) and Chinese insurance company Anbang grabbed a lot of headlines in the past month as Marriott eventually won after Anbang mysteriously dropped out. Caught up in the bidding war and subsequent merger arb trading are shares of timeshare vacation company Interval Leisure Group ("ILG" shares trade under IILG).  ILG struck a separate deal on October 28, 2015 for Starwood's timeshare subsidiary named Vistana Signature Experiences (previously set to be spunoff by Starwood) in a reverse morris trust transaction where Starwood would spinoff Vistana and immediately merge it with ILG.  The transaction will be tax free to Starwood shareholders, and after the merger, Starwood shareholders will own 55% of the new ILG with pre-deal ILG shareholders owning the remaining 45% of the shares.

The two Starwood deals happening parallel creates two technical, maybe non-economic, reasons why ILG's share price has fallen 35% since the deal announcement (there are other reasons discussed below as well): 1) if a Starwood shareholder was going to sell the Vistana spinoff anyway, well now they have a currency in ILG stock to do so before the spin date, essentially pulling forward some of the typical spinoff selling dynamics, 2) merger arbitrage investors are shorting ILG along with Marriott shares to capture the Starwood/Marriott spread.  While in both cases, the ILG shares sold short will be covered with new shares issued at the end of April when the deal closes, thus not creating a short squeeze, but after the deal is completed investors will begin to look forward and see a cheap company trading at ~7x EBITDA while its closest peers trade 9-10x EBITDA.

Any timeshare related bull thesis has to first acknowledge this is an industry with a questionable end value to its customers.  Most timeshares are sold, not bought, via free seminars where high pressure salespeople pitch people while they're on vacation to drop tens of thousands of dollars on a timeshare so they can relive their vacation year after year in perpetuity.  For most travelers this transaction is dubious, but maybe for a small subset who want to return to a resort year after year and stay in a suite larger than your typical two queen hotel room, a timeshare might make some sense.  But for many I suspect that they fall for the romanticism of owning a tiny piece of paradise without fully considering the annual maintenance fees and quickly depreciating (in many cases to $0) initial investment, it's a vacation home for people who can't afford vacation homes.  Even so, billions worth of timeshares are sold annually and the business of servicing and managing those timeshare units can be a good profitable one.

Interval Leisure Group was a 2008 spinoff of Barry Dillar's IAC which at the time was 30% owned by John Malone's Liberty Media, that ILG ownership has since been transferred to Liberty Ventures (LVNTA, a tracking stock of Liberty Interactive).  Historically, ILG has operated in the asset lite timeshare exchange business where they run Interval International, the second largest exchange behind Wyndham's RCI, allowing timeshare owners who pay a $89-129 annual subscription fee to trade their weeks/points with other timeshare owners.  Developers sign up with Interval International and often pay the initial year or two subscription in order to sweeten the pot and make timeshare ownership a bit more appealing to buyers by giving them flexibility to visit other locations/resorts.  This is a sticky business with a 90% annual renewal rate.

Over the past several years, ILG has also gotten into the vacation rental business (primarily in Hawaii) and other attractive management fee revenue businesses around the timeshare ecosystem.  In 2014, they purchased the timeshare development and management business from Hyatt where they have a licensing agreement to use the Hyatt name to develop and manage more timeshares, they build resorts and sell off the timeshare units while collecting an ongoing management fee.  As the timeshare industry has continued to consolidate, ILG's exchange business has faced competitive pressures as larger developers create their own internal/closed exchange network and don't sign up with ILG.  In order to feed the exchange and management contract businesses, ILG needed to increase their development/sales arm as more timeshare companies become vertically integrated.

Vistana -  Starwood's timeshare resorts under the Sheraton, Westin, St. Regis brands - will give ILG exactly that, it dramatically increases the timeshare (vacation ownership) sales piece of ILG.  Timeshare sales is a capital intensive and cyclical business, much more so than the legacy ILG business, so this feels like a defensive merger to quickly vertically integrate and protect the fee revenue businesses going forward. 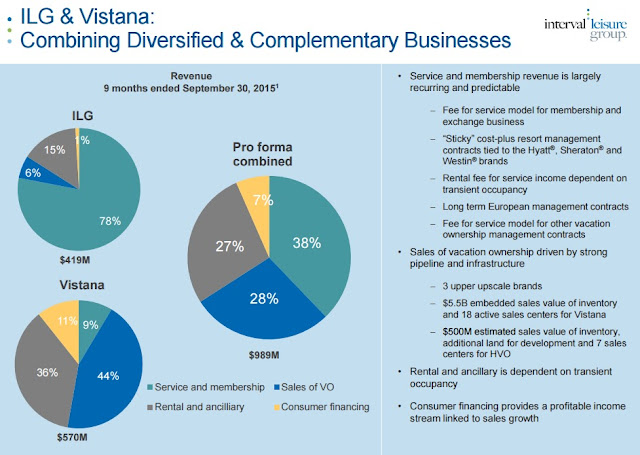 The less enticing reason why ILG has fallen significantly since the merger announcement is the market believes they overpaid, at least when looking at near term multiples.  It's a stock for stock deal, but at the time of the press release the deal was valuing Vistana at $1.5B on only $125MM of EBITDA, at least two turns above where peers were trading and it looked to dilute ILG shareholders.  But in order to get comfortable with the multiple paid you have look a little longer term, Vistana includes over $500MM in timeshare mortgages that could be securitized and turned into cash, 5 standard hotel resorts that will be refashioned into timeshare properties, and additional development opportunities at Vistana's 22 current resorts.  All in, they estimate that Vistana comes with $5.5B in future timeshare inventory that can be sold, and then added to ILG's recurring fee ecosystem.

Tucked away in the merger documents (page 98) Vistana breaks out their long term projections all the way out to 2024, likely in response to the market's reaction to the sticker price, but also to show the value in the inventory pipeline:

Be a little skeptical but it provides some perspective on the headline price tag.

Valuation
To keep things relatively simple, ILG is expected to do $185MM in EBITDA in 2016, Vistana is expected to do $148MM (both from the most recent prospectus), assuming no deal synergies (guided to $26MM annually after 5 years) and subtracting out $18MM of stock based compensation gets a proforma 2016 EBITDA run rate of $315MM.  The new share count will be just under a 130 million, at $13.35 per share, that's a market cap of $1.733 billion, the new ILG will have $464MM in net debt (ignoring non-recourse securitizations).

Marriott's timeshare business, Marriott Vacations Worldwide (VAC), is a good comparable for ILG, both will be a mixture of recurring management/exchange fees and development sales, both operate on the higher end of timeshare brands, and they're both pure play vertically integrated companies.  Marriott Vacations trades for ~9x 2015 EBITDA, at the same valuation using my EBITDA estimates gets you to a $18.35 share price for Interval shares, or 36% higher than today which would just about make up the difference in performance between Marriott Vacations and ILG shares since the 10/28 Vistana deal announcement.

Risks
Disclosure: I own shares of IILG
Posted by MDC at 4:55 PM 33 comments: