It's been a busy last few months for me personally, as a result I haven't spent a lot of time on developing macro thoughts (not that I'm good at it anyway) and instead have just tried to avoid making any big mistakes.  So far so good in 2015 on that front: 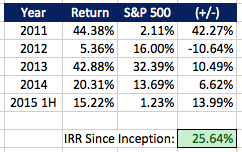 There are a lot of spinoffs happening this week, there might be some attractive ones in there but it's clear the theme is too popular and its late in the cycle, buying any and every spinoff is not likely a good strategy at this point.  Two types of ideas have been working especially well for me in the last 6-9 months: former NOL shells (GRBK, PARR) and spinoff transactions that are paired with another deal creating additional synergies (ATK/ORB/VSTO/OA, SSP/JRN/JMG), I'll be looking for more of both in the next few months.

The thesis remains intact for most of my current holdings, instead of just repeating those ideas, below are some additional thoughts on previously mentioned companies that I've sold/passed on:
Current Portfolio:
Disclosure: Table above is my blog/hobby portfolio, its a taxable account, and a relatively small slice of my overall asset allocation which follows a more diversified low-cost index approach.  The use of margin debt/options/concentration doesn't represent my true risk tolerance.
Posted by MDC at 9:13 PM 7 comments: