I'm about a year late on this post, thank you to Sterling Capital (@jay_21_) -- one of the best follows on Twitter -- for pointing me back to the idea.  Also deserves a belated hat tip for collaborating on the ACR idea.

One of my early successes was Gramercy Property Trust (GPT), originally a busted up commercial mREIT (favorite theme of mine) which following the financial crisis transformed itself into an industrial triple net lease REIT before eventually selling itself to Blackstone in 2018.  The architect of that transformation and value creation story was Gordon DuGan, one of the few CEOs I've kept a Google alert to keep tabs on where they go next.  Last March, DuGan popped back up as the new Chairman of Griffin Industrial Realty (GRIF is the old symbol), Griffin was an accidental real estate company, a 1997 spinoff from an operating company, Griffin spent the following two plus decades operating in the relative shadows slowly building out an industrial portfolio -- first in Hartford on historical land holdings and later expanding to PA, Charlotte and Orlando.  Bringing in DuGan signaled a transition for the company, late last year Griffin announced they would be rebranding as INDUS Realty Trust (INDT) and converting to a REIT.  On the investor day last fall, DuGan admitted to have never heard of the company prior to meeting the CEO at a REIT conference, but today I think the company is interesting (more of longer term value investment than event-driven) because:

The current industrial portfolio is heavily skewed to the Hartford market where INDT had much of its undeveloped land, purchased long ago and some of that land is still held on its balance sheet at historical cost.  The company's strategy to diversify away from Hartford, instead focusing on their other markets of Lehigh Valley (PA), Charlotte and Orlando. 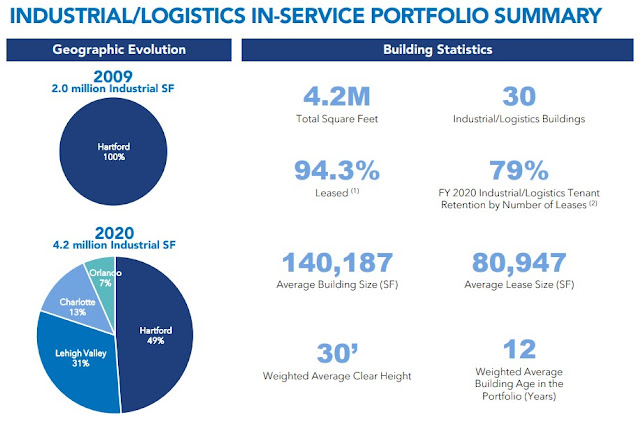 They point to the age and size of their assets as a differentiator, their buildings are newer and focused on the mid-sized market which provides them a lot of flexibility in the types of tenants they can attract while still being economical from a cost perspective.  I don't have a lot to add to their current portfolio, seems reasonably high quality with a diverse tenant mix. 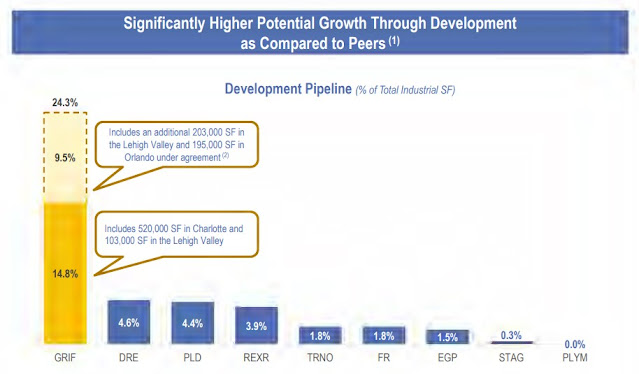 Why INDT is unique is their ability to grow through development versus needing to rely on making sizable portfolio acquisitions to move the needle.  I'm generally a sucker for real estate development companies, my view is the market has a hard time valuing development assets correctly as they're non cash generating and thus not great for the REIT structure or investor base.  The problem with development companies is typically the long construction cycle, if for instance you're HHC, its 2018 and makes perfect sense to build a beautiful high rise office building on the Chicago River, by the time its complete in 2020, there's a pandemic and people are questioning if they'll ever go back into the office again.  A lot can happen in those two years before construction is complete and even longer to bring it to stabilization.  With industrial warehouse type properties, the construction is pretty quick and simple, 9-12 months, the product type is pretty homogeneous, you don't need a fancy architect to attract top tenants.  The timeframe from shovels in the ground to stabilization is shorter and the certainty of projected cash yield is firmer on construction costs.  This is a less risky form of development with much of the same upside.

INDT has historically been able to earn 7.7%-8.1% cash yields on their development costs, their current projects are estimated more in the 6.0%-6.5% range (guessing the difference is land cost, historical cost versus current market in their new developments), but with stabilized assets trading in the 4%-5.5% range, there's a lot of margin available to INDT's development platform to create shareholder value.

This week, the company issued equity at $60 per share giving them ample capital to pursue additional development opportunities later this year.  To illustrate what I think the company could be worth once this capital is put to work, I created the below back of envelope math. 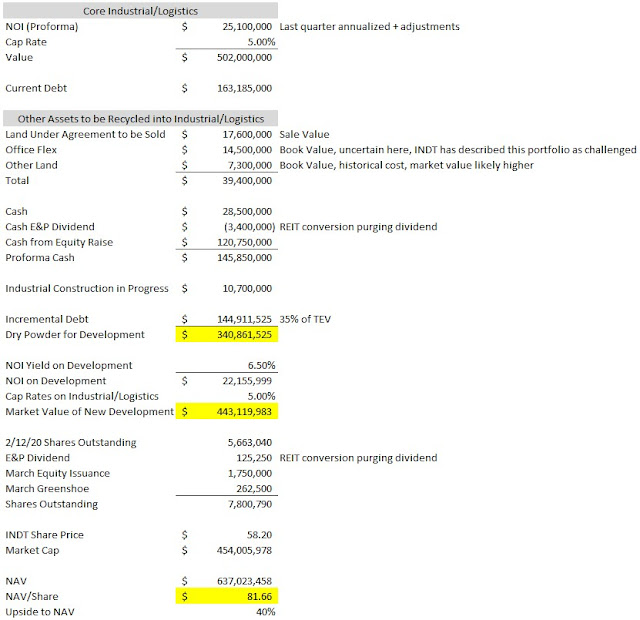 The company still has a fair amount of non-core assets to be sold, so I assume those are sold at the price they're currently contracted at or book value which might be conservative, especially for the land holdings.  As part of their recent REIT conversion, they'll have a purging dividend that will be paid in part cash and part shares.  Then I also assume they'll sell the additional greenshoe shares, but maybe that's not a guarantee if the market's slide continues.  But then all that cash, plus incremental debt gets pushed into development projects at a 6.5% yield on cost, revalued by the market at a 5% cap rate.  The end result is roughly $82 per share, think of that as a target price a year out.  Probably a few mistakes in there, feel free to point them out.  One thing I am ignoring for now is the warrants that were issued last year as part of a private placement, those have a strike price of $60 which would raise additional capital as well.
My estimate is highly dependent on the market cap rate for industrial properties and their yield on cost for development, I ran a quick scenario analysis that shows what the math looks like at various assumptions.  Across the top is the development yield and down the left side is the market cap rate.

As you can see, the market is roughly valuing INDT at a 6% cap rate with little value being given to their development pipeline.  The math could really go in INDT's favor if they're able to issues shares closer to NAV or even above (many industrial REITs trade at a premium to NAV) creating that virtuous cycle that all REITs strive to get.  In summary, you have a proven capital allocator in a subsegment of the real estate market that should have continued tailwinds post-covid with a decently long but safe development pipeline to create significant value.

Disclosure: I own shares of INDT
Posted by MDC at 3:30 PM 15 comments: