2015 was a good but frustrating year, most of my gains were front loaded in the first quarter and since then I've been treading water.  Owning several big positions in real estate companies wasn't the best positioning in a year when the Federal Reserve has finally began to tighten rates.  Value added spinoffs and NOL rich companies drove my returns this year.  No cash was deposited or withdrawn from the account and to reiterate the overall portfolio goal is to generate a 20% IRR over the long term. 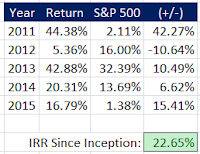 Below is a breakdown of the attribution of each holding during the year to my performance, which is interesting at least to me, the grayed out holdings were closed during 2015: 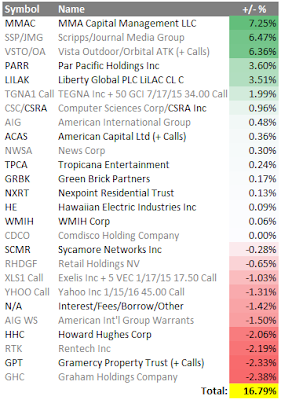 Thank you to everyone for reading and happy new year.
Disclosure: Table above is my blog/hobby portfolio, its a taxable account, and a relatively small slice of my overall asset allocation which follows a more diversified low-cost index approach.  The use of margin debt/options/concentration doesn't represent my true risk tolerance.
Posted by MDC at 5:03 PM 10 comments: