Retail Value Inc (RVI) is a retail strip center REIT that was a 2018 spin of SITE Centers (SITC, fka DDR) and has always been on my watchlist.  There were a few of these "good REIT/bad REIT" spins during that era, this is the "bad REIT" as it contained the Puerto Rican assets (along with some of their lower quality continental U.S. properties) that were largely offline due to Hurricane Marie.  From the beginning, RVI was designed to liquidate the portfolio and return capital to shareholders, over the last several years they have made slow progress on this goal by selling the continental U.S. properties piecemeal.  The question in my mind was always what value to put on the Puerto Rico portfolio?  That question has been answered which substantially de-risks the situation, last week, the company announced a bulk portfolio sale of their Puerto Rican assets for $550MM, which post-closing would leave 8 continental U.S. properties and a pile of cash.  By triangulating a few numbers, I have the remaining portfolio trading at approximately a 13% cap rate, which even for secondary/tertiary markets, seems too cheap.

Here's my back of the envelope math, feel free to point out mistakes: 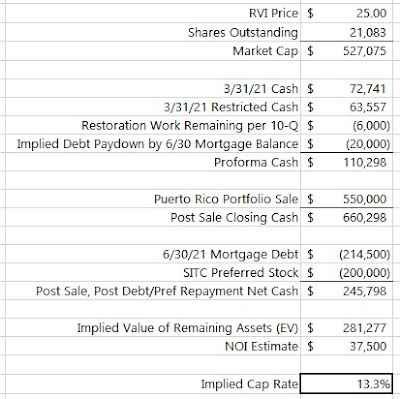 Now there could be some frictional costs that I'm completely omitting, but I'm also not including any ongoing cash flow from the remaining properties, make your own assumptions there.  But here are some of my assumptions:

Doing a very basic scenario analysis for what the remaining properties are worth yields anything from $26.50-$33.90/share in my estimates, versus a $25/share price today.

Just to smell check these estimates, based on the delta between the 2021 NOI guidance given in the Q4 and Q1 supplemental, the three continental U.S. properties RVI has sold this year for a combined value of $34.4MM generate about $3MM in NOI for a 8.7% cap rate.  The Puerto Rico portfolio is being sold at an approximate 9% cap rate.  Another way to look at it, on a square foot basis, RVI will have 3.779 million square feet remaining, in 2020 they sold properties for $107/sqft, applying a similar number to the remaining portfolio would yield a value equivalent to a 9.3% cap rate.  So somewhere in that 9% range seems reasonable now that we're recovering from covid.

In summary, assuming the PR deal closes (maybe that's the biggest risk, we are in hurricane season), RVI will have no debt, approximately half their market cap in cash and only 8 properties left to sell.  I could see this taking a similar path to the MIC liquidation discussed recently, where they have back-to-back portfolio sales (although they'll probably wait until after the PR deal closes, supposed to be by end of Q3) to clean up the liquidation quickly.  Similar to MIC, not a home run, but with the situation largely de-risked, a potential ~20% upside seems pretty attractive.

Disclosure:  I own shares of RVI

CorePoint Lodging (CPLG) is an old friend of the blog that I've tried hard to forget, it is a hotel REIT that was spun from LaQuinta (LQ) in 2018 simultaneously with Wyndham's (WH) acquisition of the LQ franchise/management business.  It is a unique public lodging REIT in that it targets the economy and midscale select service segment (essentially all LaQuinta branded), most public REITs own upscale and luxury hotels.  Looking back at the spin, it was a garbage barge spin and performed like the moniker suggests.
Hotel REITs are a tough asset class because as a common shareholder, you have a lot of mouths to feed ahead of you.  REITs can't be operating businesses so hotel REITs need management companies to run the hotels themselves which runs 5% of revenues, then you have the franchise fee which is another 5% of revenues, if you rely heavily on online travel agencies, that's another big hair cut. On top of that, you have a lot of fix costs and a heavy asset base with real depreciation, interest expense, etc., these aren't good businesses for public markets generally.  For those reasons, hotel REITs tend to avoid the economy and midscale segments because the average room rates are low and don't provide enough scale to justify all the overhead costs involved.  These hotels tend to be run by local mom and pop type operators who don't have the corporate costs and can avoid the management fee by operating the hotel themselves.
CorePoint executives clearly understand this even if they don't say it explicitly and have been selling off their older, economy level hotels to individual operators at multiples that are way above where the common stock traded.  Which is sort of the opposite of what you'd expect, but if the buyer is purchasing the hotel unencumbered by the management fee, gets an SBA loan, and they get a tax depreciation shield, it starts to make some sense.  This week, CorePoint essentially put the rest of the company up for sale by announcing they are pursuing strategic alternatives.
Going back to the logic I used recently with Condor Hospitality (CDOR), another hotel REIT that is in the process of selling themselves, I came up with a very rough back of the envelope calculation for what CorePoint is currently valued at off of 2019 Hotel EBITDA (again, I understand the faults of that math, but it's what other comparable transactions are quoting as a valuation metric).  With Condor it was relatively simple because their hotel portfolio has remained constant since 2019, but CorePoint has sold a significant portion of their hotels in the last 18 months. 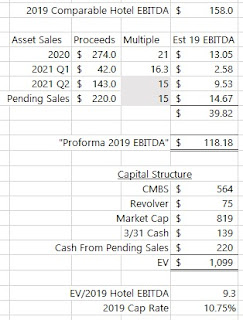 In CorePoint's 2019 10-K they gave us a "Comparable Hotel" EBITDA number which adjusted for those hotels that were sold or non-operational (CorePoint had some hotels hard hit by hurricanes a few years back) of $158MM.  From there, I attempt to back into what the comparable-"Comparable Hotel" 2019 EBITDA would be adjusted for all the asset sales that have taken place or are pending.  For the Q2 and pending sales, I'm using a 15x EBITDA multiple, I didn't see it directly in their filings but management mentioned 15x on their last earnings call.  From there I get about a $118MM "2019 Hotel EBITDA" number for the remaining hotels, please check my work if you're interested in the situation.  On an EV of about $1.1B, that's a 10.75% cap rate or 9.3x 2019 Hotel EBITDA, well below where the company has been selling its less attractive non-core assets and where other hotels have transacted recently.
Similar to the extended stay segment, economy and midscale hotels held up better through the pandemic and have recovered faster than urban or group oriented hotels.  Alongside their strategic alternatives announcement, CorePoint updated us on the performance of their hotels in the second quarter:

It's not an apples-to-apples comparison since CPLG has sold off a number of lower RevPAR hotels since 2019, but here's a snip from the Q2 2019 earnings release, so business is either back to 2019 levels or at least near it.

Blackstone owns 30% of CorePoint, a legacy of taking LaQuinta private in 2006 and public again in 2014.  Blackstone is obviously a big real estate investor and recently partnered with Starwood in a club deal to buy out Extended Stay America (STAY), maybe they'd do something similar here as CorePoint's hotels serve a similar segment (but clearly without the franchise business like STAY) and select-service hotels could over time look more like extended stay models with less than daily cleaning, etc., driving higher margins.
I'm a little gun-shy on putting a target price on CPLG, the stock price has run significantly and I still have mental scars from my last go around, but to a private buyer who can detach the management contract, it could be worth a decent amount more than where it is trading today at $13.75.  A 9% 2019 Hotel EBITDA (my number could be flawed) cap rate would be around $18 and would still be a lower valuation than where they've been selling their lower quality assets during a pandemic, maybe that's too high, but shouldn't be too far out of reasonableness.
Disclosure: I own shares of CPLG (and CDOR)
Posted by MDC at 3:33 PM 8 comments: 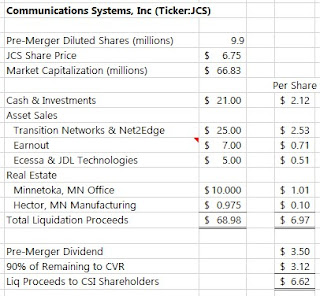