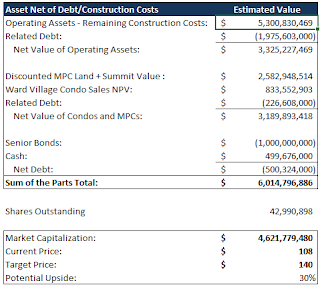 Other Thoughts:
Disclosure: I own shares of HHC
Posted by MDC at 3:06 PM 23 comments:

OncoMed Pharmaceuticals (OMED) is the latest entry in my occasional series on busted biotechs, as the name suggests OncoMed is a development stage company focused on cancer related therapies, it hit a series of setbacks in 2018.  It's now a micro-cap, just $40MM in market cap with $57.3MM in cash as of 12/31 (minus a significant burn rate) and few apparent prospects.  In December, OncoMed announced a merger with U.K. based Mereo BioPharam Group (MPH), the deal is effectively structured as a reverse merger/cash infusion for Mereo resulting in the new combined company being dual listed in the U.S. and U.K thus opening up more channels for inevitable future capital raises.  Mereo is focused on rare diseases, it has an interesting history of acquiring the "dogs and cats" of larger pharmaceutical companies that have received significant previous investment but for some reason or another are no longer strategic priorities.  Mereo is technically public and trades on the smaller AIM exchange, but liquidity is extremely limited with just a few trades occurring over the past couple months.

Mereo is going to create 23.7 million new MPH shares and through a depositary create Mereo ADRs that will trade in the U.S. to issue to OncoMed shareholders.  The exchange ratio is subject to adjustment based on an expected OncoMed cash balance of $38MM at the time of the closing (guided to Q2), it can be adjusted both ways if the cash comes in above or below that line.  At year end, cash was $57.3MM versus $70.9MM at 9/30, indicating about a $13.5MM quarterly burn rate putting that $38MM cash goal in jeopardy unless serious cost cutting as happened since the deal was announced.  But using the 23.7 million shares number, current market prices (again, MPH barely trades, but is quoted at 160 pence) and current GBP:USD exchange rates equates to ~$50MM in stock consideration versus a market cap of $40MM for OncoMed.

OncoMed has two therapeutic candidates currently in their pipeline, each is getting its own non-transferable CVR in the transaction:

Celgene is OncoMed's historical development partner, however, they have declined to exercise several license agreements on OncoMed assets in the last 18 months, TIGIT is the last of those options and based on recent events seems unlikely to get exercised.  NAVI doesn't have a commercialization partner (Celgene already turned it down), finding a new partner is step one before the CVR payment can be contemplated, in even the most optimistic scenario, receiving any payments is a long ways off.

Additionally, earlier this month, OncoMed added a 3rd(!) CVR which seems a bit silly for a tiny micro-cap merger.  However, it might signal that OncoMed is more optimistic that Celgene will opt-in to the TIGIT program than the market believes (okay, I'm probably stretching there), this new CVR will cover any additional payments received (other than the $35MM opt-in payment which would still be paid in MPH shares) from Celgene, so it only becomes a live bet after the opt-in occurs sometime in 2019 and diverts cash from NewCo to OMED shareholders.  This CVR wasn't contemplated at the time of the merger, its likely a result of shareholder feedback and an effort to gain additional support for the merger.

In summary, you have a potential ~25% upside from the arb spread closing (again, using stale/illiquid MPH market cap, I'm not underwriting to that number as it could drop significantly once there is liquidity but I've also had success from these reverse mergers going up after the deal closes) and the possibility of Celgene exercising their option on TIGIT which would add another ~90% return from the CVR before year end.  This is obviously very speculative,  I've sized my position small accordingly.

Disclosure: I own shares of OMED
Posted by MDC at 1:21 PM 8 comments: