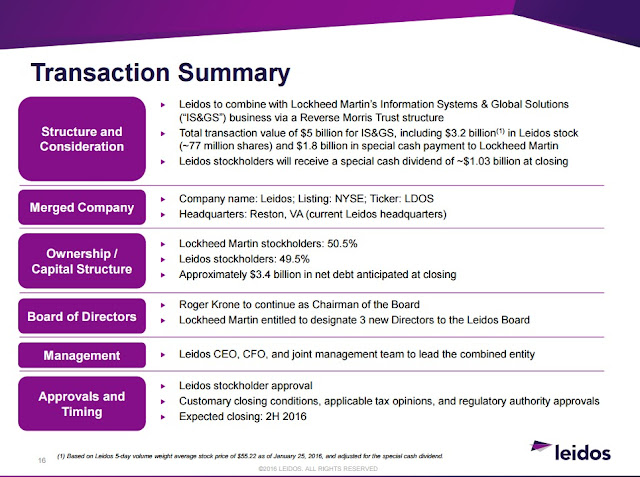 Disclosure: I own shares of LMT (will be exchanging for LDOS) and CSRA
Posted by MDC at 11:00 PM 46 comments:

Late last Friday, Hawaii's Public Utility Commission voted against NextEra Energy's (NEE) 19 month old deal to purchase Hawaiian Electric (HE) which provides electricity to 95% of the state.  I held out brief hope that the initial rejection would be a political move as the merger is deeply unpopular in Hawaii (they don't like outsiders) and both sides would come back to the table, make some concessions and the deal would get done.  No luck.  NextEra threw in the towel on Monday and terminated the merger transaction, Hawaiian Electric will receive about $95 million in a termination fee and deal expenses.  As part of that transaction, Hawaiian Electric was going to spinoff their bank subsidiary, American Savings Bank (ASBH), to HE shareholders but now that has also been shelved.

The shares sold off about 7% (to be fair they sold off about the same two weeks ago in anticipation of a no vote) as merger arbitrage investors exited the trade, when a deal breaks it often creates opportunities, time will tell if this is one with HE.  So what now?  Who would go through the pain of dealing with Hawaiian regulators to buy HE?  It's fairly clear that the utility can't go it alone and make the state's desired clean energy mandate by 2045.  Reports show that Berkshire Hathaway's energy subsidiary recently registered a business in Hawaii.  Berkshire has the brand recognition, deep pockets and commitment to moving towards clean energy that could appeal to the Hawaiian populace; Warren Buffett again playing the "friendly" acquirer role.

I continue to hold for the time being, if they were to find another buyer or just spinoff ASBH outright it could be a very attractive transaction.  To summarize the spin's appeal:
Disclosure: I own shares of HE
Posted by MDC at 9:21 PM No comments: