Background Information
Eagle Hospitality Properties Trust (www.eaglehospitality.com) is a bubble era private equity buyout of a real estate investment trust (REIT) that owns 13 branded hotels (2 Marriott, 1 Hyatt, 8 Embassy Suites, and 2 Hilton) with 3,538 rooms spread throughout the United States and Puerto Rico. Back in 2007, a joint venture of Apollo Real Estate Investment Fund V L.P., Aimbridge Hospitality, L.P., and JF Capital Advisors, LLC purchased Eagle Hospitality for $13.35 per share, or roughly $700 million. At the time, Eagle Hospitality’s preferred shares were not callable and remained outstanding following the closing of the transaction while the common shares were delisted after going private. The timing couldn’t have been worse for transaction as it was done at the top of the cycle shortly before the bursting of the real estate bubble. As a result, starting in December 2008, Eagle Hospitality decided not to pay the preferred dividend due to economic conditions and the resulting impact on the hotel industry.

The joint venture financed the deal with loans provided by Bear Stearns. After Bear Stearns teetered on the brink in the spring of 2008 and was saved by J.P. Morgan, with aid provided by the Federal Reserve, the loans ended up in the Fed’s Maiden Lane I vehicle of assets deemed too toxic by J.P. Morgan.


Current Situation
In March the company approached the Federal Reserve to renegotiate the debt load, but was unsuccessful. As a result this past May, as part of the Federal Reserve's plan to unwind the Maiden Lane transactions, it put the loans issued up for sale. 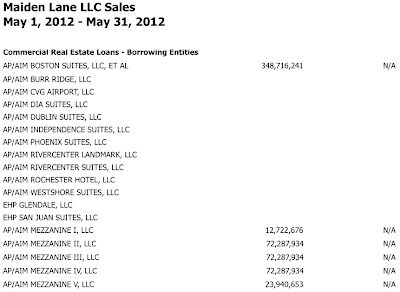 As September 9th passed, Eagle Hospitality was able to convince Blackstone to allow the company to sell its 13 hotels and repay the secured debt at a discount. Brian Kim, a managing director of real estate at Blackstone, said in the below linked article that, "Our view is that the assets did not cover the debt balances... What we decided to do is to give them a (chance to) basically market all of the properties for sale at a minimum price that we would be able to get paid out for a slight discounted par... We basically gave them a price that we were indifferent about between the two outcomes.. If we got taken out at that price, we'd make a very attractive return... Alternatively, we could basically take the assets and do what we do, which is fix problems." That assessment doesn't sound very promising for any of Eagle Hospitality's other stakeholders, however, is it accurate?


Blackstone is likely willing to allow Eagle Hospitality the chance to sell the portfolio because it would still represent an fantastic quick return for their fund and requires less effort on their part not having to operate, or bear the costs involved in selling the assets. If Blackstone accepted a 10% discount to the ~$600 million face (the balances has amortized since the May sale), it would still receive $540 million, subtracting out the $350 million J.P. Morgan loan, and that leaves Blackstone with an approximate $65 million profit (after paying interest expense) on its $114 million equity investment in less than a year with minimal time and effort.

Valuation
Eagle Hospitality’s hotels are performing well and have remained current on their mortgage debt, experienced EBITDA growth of 15.9%, growth of revenue per available room (RevPAR) of 7.1%, an average occupancy rate of 75.4%, an average daily rate of $126, and expected 2012 NOI of $45 million. The hotels remain in good condition, as the company hasn't slacked off on capital expenditures, spending $77 million since 2008, or $20k per room. According to the Mid-Year 2012 USRC Hotel Investment Survey, full-service capitalization rates were at 7.9%, down from 8.1% six months ago, but flat to 7.9% twelve months ago, using the 7.9% cap rate and applying it to $45 million NOI would value the portfolio at $570 million ($161k per room). It's hard to get a handle on good comparable transactions, but RLJ Lodging Trust recently purchased an Embassy Suites 20 minutes outside of downtown Boston for $235k per room and a 7.9% cap rate, so discounting the per room value for Eagle's more midwest centric properties makes the valuation seems reasonable.

As a result of the going private transaction, the financials for Eagle Hospitality are not publicly available, however since it has been able to cash flow its debt payments and make significant additional capital expenditures, there's potential for a material amount of cash on the balance sheet available for either recapitalization or distribution after the hotel portfolio is sold and the Blackstone debt is repaid. It's a complete shot in the dark, but I'm going to assume there's at least $25 million in net cash on the balance for valuation purposes.

Very rough liquidation waterfall, but assuming the $570 million portfolio sale price, 10% discount on the Blackstone debt, and the projected NOI and net cash available, I come up with $41.5 million available for the preferred shareholders, or $10.38 per share. I would stress that this is a very rough number and highly sensitive to the assumed sales price which could be too high or too low, even a small change would result in a significant change in the recovery value. 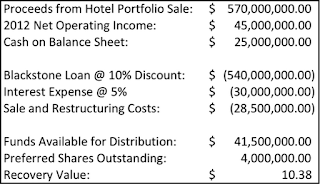 
The preferred shareholders do have representation on the Board of Directors by two members of an activist investor, Esopus Creek, which should provide some comfort that interests are aligned and the distribution of proceeds is equitable. But there are lot of unknowns which makes the preferred shares highly speculative and potentially worthless in the event that Eagle is unable to sell the properties for the agreed upon amount and within the time frame stipulated by Blackstone. However, in the event that Eagle Hospitality is forced to turnover the keys there could be enough cash on available for a small recovery for the preferred shares, but without the financials its very difficult to put a floor on the value.

I have a small position in EHPTP, small enough where a total loss would have a minimal impact on my portfolio. In taking a closer look at Eagle, I may have initially underestimated the risks involved, but I'm going to hold my position until a final resolution is reached.
Posted by MDC at 11:14 PM