To be a successful value investor sometimes you need to endure short term pain while "Mr. Market" goes through one of his mood swings.  While the broad stock market has been continually making new highs over the past two months, one industry that continues to be shunned is natural gas producers.

I run a fairly concentrated portfolio, natural gas producer Ultra Petroleum is one of my larger positions, and so far has been a disappointment.  After reporting 4th quarter results last week, Ultra hit fresh 52 week lows as gas prices remain stubbornly low and Ultra was forced to take another reserve write-down per SEC guidelines.

What is Ultra doing in response to the current environment?

Ultra is aggressively withdrawing capital as it doesn't make sense to monetize their assets at current natural gas prices if they can help it.  Despite cutting capital expenditures from $1.5 billion in 2011 to $835 million ($607 net after the LGS midstream asset sale), Ultra Petroleum still had record natural gas and oil production in 2013 of 257 Bcfe, illustrating the lag between cutting expenditures and the eventual decrease in production.  Ultra will be cutting capital expenditures even further in 2013 to $415 million and as a result will show their first reduction in year over year production, projecting 228 to 238 Bcfe for 2013.  Other natural gas producers are following suit in cutting production, including their joint venture partners in the Marcellus, Shell and Anadarko.

Natural gas supplies are sticky and still slightly elevated at 16% above the five year average, but if you compare that to where we were last spring/summer, supplies have closed the gap considerably and should continue to do so. 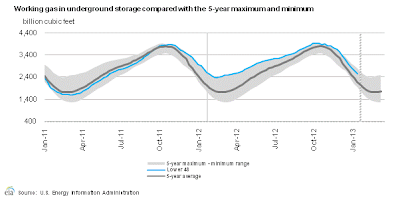 Despite low natural gas prices Ultra's margins continue to remain healthy, 64% operating cash flow margin and a 29% net income margin (after backing out the non-cash impairment charge).  Going forward Ultra is targeting $100 million free cash flow annually as they peg capital expenditures to operating cash flow for the next several years.  Management also stressed on the conference call that they are not in danger of breaching debt covenants, so the balance sheet looks safe with the debt having an average maturity over 7 years.

Ultra also provided the below reserve sensitivity, management has repeatedly targeted the $5 price to start deploying additional capital again, so what might their reserves look like at the $5 price?

At the current market capitalization of $2.51billion in equity, and $1.8 billion in debt, that brings a total enterprise value of $4.35 billion.  Taking the $5 sensitivity with all the PUDs, its about a $7.182 billion valuation, subtracting out the $1.837 billion in debt, and you get an equity valuation of $5.345 billion, or over double the current valuation (~$35 per share).

I still believe that as natural gas producers reduce supply and new sources of demand come online, natural prices will eventual rise to where there's a reasonable balance.  That balance sounds like its in the $5-6 range over the next year or two which would still be half what it is in Europe or Asia.  I've taken advantage of this dip in Ultra's shares and continue to add to my position.

Disclosure: I own shares in UPL
Posted by MDC at 10:01 PM