Can Mariano's Freshen up Roundy's?

Roundy's is a Milwaukee based supermarket operator that was taken private in 2002 by Willis Stein, a private equity shop.  It returned to the public markets in February 2012 with a $112 million IPO, Willis Stein still controls 32.5% of shares, 41.3% of the voting rights, and 3 of the 7 board seats.  It operates mostly conventional supermarkets under three banners: Pick 'n Save (93 stores, mostly in Milwaukee), Rainbow (32 stores in Minneapolis/St Paul), and Copps (25 stores, mostly in Madison and Green Bay). 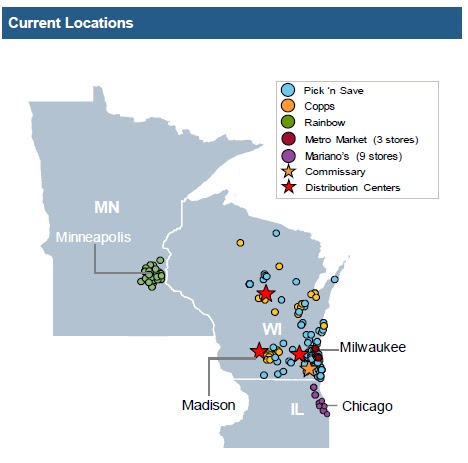 Roundy's is the market share leader in Milwaukee and Madison, 40% share overall in Wisconsin, and the third ranked grocer in Minneapolis/St Paul.  Roundy's has gained share in the past decade despite the increase in competition from Wal-Mart and other big box retailers, with mostly smaller independent operators losing share, but despite this, sales have remained flat over the past 5 years and same stores sales growth is non-existent.  Roundy's growth strategy is centered around increasing higher margin business through promoting its own-brand Roundy's and Roundy's Select products and increasing the amount of perishable food it sells.  Their lack of top-line revenue growth is slightly masked by the gain in own brand sales as they are lower cost goods, but generally have higher profit margins.

Roundy's main outlet for their strategy is to expand their new Mariano's Fresh Market (9 current locations) concept in the Chicago market by opening 4-5 new stores annually over the next 5 years.  Named after their CEO, Robert Mariano (former executive of Dominick's in Chicago), the Mariano's concept features a smaller footprint store, focused on premium perishable/prepared foods and organic/natural offerings.  Roundy's is targeting the Chicago market due to the perceived missteps of conventional chains, the above average income levels, and the higher density population.  Being from Chicago, I've yet to actually visit one of their locations (moving with two blocks of one next month), I've heard nothing but great reviews, but does it make for an actionable investment idea?

Balance Sheet
I'm mostly a balance sheet guy, and Roundy's has a fairly simple, but also fairly weak balance sheet.  It's pretty obvious that the company is a former LBO buyout, Willis Stein streamlined the company by selling off the wholesale operations, piled on debt, and paid itself a healthy dividend in the process.  A quick glance at the balance sheet and you see $697 million in long term debt and capital leases against an equity market cap of $296 million, or a 2.35x debt-to-equity ratio.  However, I believe this understates the true leverage of the company for several reasons:

Operating Leases
Many struggling retailers, Sears or JC Penney, have a built in cushion to their valuation due to their vast real estate holdings, Roundy's doesn't have this floor.  Roundy's leases all but 2 of their stores and 1 of their operations centers, these leases are structured as long term net leases where the company pays for the real estate taxes, insurance, and maintenance of the properties.  By leasing, rather than owning, the company has effectively increased their leverage without accounting for it on the balance sheet.  Taking their $1.96 billion in future lease obligations and discounting it back at their cost of financing (5.75%) adds an additional $1.74 billion of long term assets and long term liabilities, bringing the adjusted debt-to-equity ratio to 8.23x.

The company produced $199 million of adjusted EBITDA in 2012, add back the rent expense of $113 million (since if they owned their real estate it would be interest expense), giving an adjusted-adjusted EBITDA of $312 million, valuing Roundy's at a lofty 8.76 EV/EBITDA multiple when you capitalize the operating leases (most supermarkets trade in the 5-6x range).

Pension Fund Liability
Roundy's also has significant pension liability as 53% of their workforce is unionized.  As of year end, their pension plans were underfunded by $36 million (accumulated benefit obligation or "ABO" of $199.7 million versus assets of $163.7 million).  Their contributions are likely going to increase as the expected return on the portfolio (used to arrive at ABO) is 8.5%, yet they have a 35% allocation to bonds.  Vanguard's Total Bond Market Index Fund has an SEC yield of 1.67%, assuming Roundy's earns that amount on their bond portfolio (and bond prices don't fall), the equity component of the pension plan would need to return an average of 12.2%, a pretty lofty goal for a diversified plan.

Goodwill
Not surprisingly, given the lack of real estate or other assets, Roundy's balance sheet assets are made up of mostly goodwill.  In the fourth quarter of last year they took a $120 million write-down associated with the fall in the market value of their equity.  Usually a non-cash charge doesn't bother me much (see my investment in Ultra Petroleum) but there are no real assets here other than the operating business, in a distressed situation there's little for non-senior lenders to recover.

Dividend
A highly leveraged, yet consistent earner could still be a valuable investment if management was disciplined about paying down debt, as any improvement in results would accrue disproportionately to the equity.  When Roundy's returned to the public markets in the first quarter of last year, its intention was to pay a quarterly dividend of $0.23, most likely to attract dividend focused investors for the IPO.  But in order to reduce debt, the company wisely cut the dividend to $0.12 per quarter in the fourth quarter.  Even at the lower dividend amount, Roundy's sports a dividend yield north of 7%, probably quite enticing for a lot of people.  However, if Roundy's held onto that cash and used it to pay off debt even faster, it would probably be more advantageous to shareholders (and would be tax deferred to the investor).

Conclusion
All the above pretty much kept me from digging too much further, the company doesn't report revenues by banner segment, so I couldn't find much in terms of projected incremental EBITDA per Mariano's store, but that could be the key number for a more growth oriented investor.  I like companies in disliked industries that have a hidden gem asset, if Mariano's was valued at Whole Foods like multiples, what would those 25-30 to Mariano's stores be worth?  Quite a speculative investment given the challenges, and I'll pass for now, but when I move in a couple weeks, I'll be sure to check out their new store.

Disclosure: No position in RNDY
Posted by MDC at 3:39 PM

Email ThisBlogThis!Share to TwitterShare to FacebookShare to Pinterest
Labels: Roundy's