"Widest arbitrage in our experience" - GPT

Gramercy Property Trust (GPT) reported its first quarter minus the CDO management business which caused all the consolidation problems with their balance sheet.  Everything looks pretty much as expected, just progressing with the already outlined plan.  I continue to be impressed by the level of disclosure Gordon DuGan and team give on a quarterly basis, if only every management team provided the level of detail on their business.

Overheated REIT Market
On the conference call today, management spent a lot of time laying out the case for how net leased REITs are trading at "very attractive valuations", and by that they mean for the sellers of equity (which they'll be after their acquisition capacity is used up) and not for the buyers.  1.2-1.3x NAV, 21x AFFO, 2.8x book, anyone buying into the sector at this point should be expecting much lower returns going forward.

At the end of my post on how REITs are overvalued, I mentioned the arbitrage opportunity that Gramercy is being presented with as a new net leased REIT flush with cash.  They could purchase commercial real estate assets in the private market and have the public REIT market almost instantly value (well probably more so after the dividend is reinstated) those same assets at a higher valuation.  I was pleased that Gramercy pointed this exact setup out on page 31 of the their updated business plan presentation.  I just hope they can balance making good asset acquisitions with the need to capitalize on the market and trade inline with peers before the cracks appear. 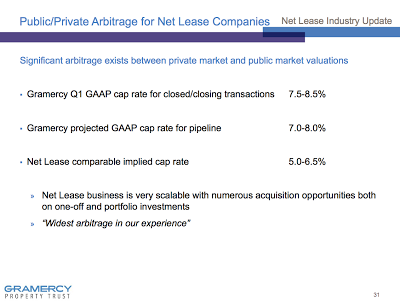 Updated GPT Valuation
With that macro backdrop, I want to update my valuation of Gramercy after the acquisition capacity (page 38 of the presentation) is used up. 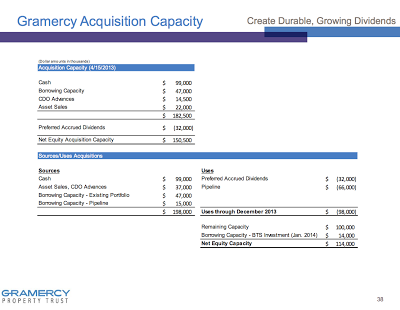 In this slide Gramercy lays out the available cash (including the potential borrowing capacity) and subtracts out the preferred (hints that its coming this year?) and the deals already in the pipeline.  In the first quarter the cash was mostly left untouched as Gramercy used the sale proceeds from the CDO bond sales to purchase several truck terminals and industrial properties. 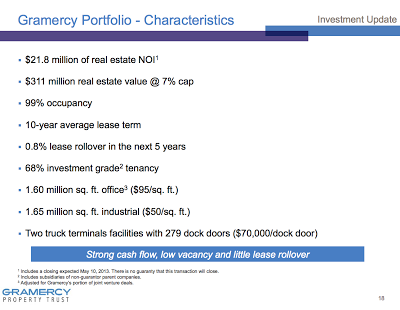 The current portfolio is expected to have $21.8 million net operating income (roughly the same as projected before).  If the acquisition capacity dry powder is exhausted at a 7.5% cap rate (mid-point of the arbitrage slide above) and using 55% leverage on the $150.5 million produces another $25.1 million in NOI, for a total real estate NOI of $46.9 million.  I'll keep using the $10 million net income number for the asset management group as it sounds like Gramercy is in the money on the incentive/performance fees and are planning on broadening the client base beyond the KBS portfolio and the Bank of America JV, total combined NOI is now $56.9 million.

I tend to think the 14x multiple is more appropriate given that Gramercy is maybe 40-50% of the way through their initial cash position since Gordon and team took over.  Management also discussed on the call how intense the competition is for net leased assets (they're trying to stay out of the fray with smaller industrial purchases), so the valuation gap between the private and public markets could narrow reducing the eventual price target.

Like many GKK investors, I bought in due to the cash balance and CDO assets, never quite imagining the company looking like it does today, but really couldn't be happier with the direction of the company.  I plan on holding until Gramercy depletes its acquisition capacity, becomes current on the dividends, and the yield hungry investors bid up the shares.

Disclosure: I own shares of GPT
Posted by MDC at 7:44 PM