It's been years since Asta Funding has been actively buying distressed consumer debt portfolios, their core business, and while they returned to that market this past quarter with a $3.3 million purchase of $53 million in face value of receivables, I think the much more important transaction is the renegotiation of the Great Seneca portfolio debt with BMO.  In the past I have treated the Great Seneca portfolio as a free option, and assumed it was worthless and the non-recourse debt would be written off as well.

During the quarter, Asta wrote down the value of the Great Seneca portfolio by $10.2 million to $46.3 million which they identify as the net realizable value.  Then below is the explanation for the transaction they completed with BMO:

"On , in consideration for a  prepayment funded by the Company, BMO has agreed to reduce minimum monthly collection requirements and the interest rate significantly. After BMO receives the next  of net collections from the Great Seneca portfolio, offset by credits of approximately  for payments made to BMO prior to the consummation of the agreement, the Company is entitled to recover, out of future net collections from the Great Seneca portfolio, the  prepayment that it funded. In exchange for possible future debt forgiveness, BMO has the right to receive 30% of future net collections, after the Company has recovered its  prepayment"

Although the 6/30/13 financials show $105 million in cash and securities, Asta paid BMO $15 million this past week as part of the revised agreement and now has $94 million in cash/securities (presumably after $4 million in cash inflows).  In essence Asta is reinvesting in this portfolio, while it might not be counted as a new portfolio purchase, its almost the same thing.

Going forward the first $12 million (net of $3 million in previous payments) will go to BMO, following that Asta will get the next $15 million and recover the prepayment, then the remaining revenue will go 70/30 to Asta/BMO.  So given the Great Seneca's net realizable value is $46.3 million, the first $27 million is allocated to BMO first, then Asta, leaving the remaining $19.3 million to be split 70/30, or $13.5 million to Asta Funding.  Asta's accounting is generally conservative (still making $9.75MM this quarter in zero basis assets), I think the $13.5 million number is likely an appropriate value for the end recovery value of the Great Seneca portfolio and may end up being a bit low.

Asta currently receives about $3 million a quarter on the Great Seneca portfolio, if this continues, BMO will be paid off in one year, and Asta will recover its $15 million prepayment in about 9 quarters.  If the $3 million quarters continue from there its about another 8 quarters (or 4 years from now) before the net realized value would be recovered in the 2nd quarter of 2017.  While it might initially feel generous to assume the $3 million can continue that far into the future, I've been pleasantly surprised the zero basis portfolios have continued to produce consistent cash flow for the past several years, and show little evidence of slowing down.  So assuming a $3 million a quarter run rate, Asta would earn about a 33% IRR on it's initial $15 million investment over the next 4 years, or an NPV of just over $7.1 million using a 20% discount rate.  The prepayment will make the balance sheet look a little weaker in the next few quarters, but I would say this is clearly a smart transaction for Asta.

Based on how I've previously valued Asta Funding, removing out the Great Seneca portfolio and adding in the NPV of the zero basis portfolio, I've made another attempt and included a line for the NPV of Great Seneca given the new arrangement. 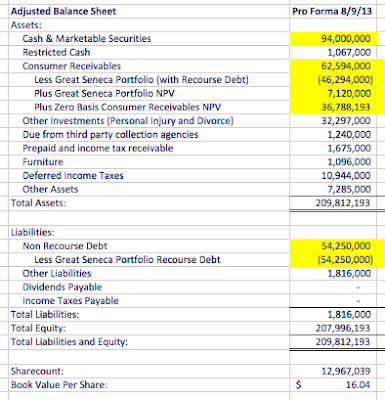 As you can see, I roughly value Asta's book value at $16 per share, or 77% higher than it's current price of just over $9.  All the minority shareholders would probably prefer a big stock repurchase plan (which has expired and has not been renewed), but it appears Asta is finally using their excess cash and investing again in the core business which should be a net positive.

Disclosure: I own shares of ASFI
Posted by MDC at 2:54 PM