This one might be a little controversial, but I think it deserves a second look... the St. Joe Company has been in the news quite a bit the last few months with two large asset sales, one of their timberland assets, and the sale of their RiverTown community in Jacksonville.  I found both transactions pretty interesting as it begins to show the company's future direction and potential value.  With the recent transactions, I think St. Joe has the opportunity to follow a similar path as the Howard Hughes Company by selling acreage in their residential communities to home builders and eventually redeploying that capital into income producing industrial and commercial assets.  Post spinoff, Howard Hughes was much farther along than St. Joe is currently in the process, but I admire St. Joe's Chairman Bruce Berkowitz (manager of the Fairholme Fund) and there's no doubt he has seen friend Bill Ackman's playbook and will move to implement a similar strategy creating value at St. Joe.

History
The St. Joe Company was formed by Alfred du Pont and his brother-in-law Ed Ball in the early 1930s to hold a collection of assets they purchased in the early days of the Great Depression.  Included in St. Joe at the time was a sugar company, an interest in Florida National Bank, cardboard box plants, an interest in the Florida East Coast Railway Company and vast swaths of northwest Florida land.  St. Joe was rather conservatively managed for decades as primarily a timber and paper business until 1997 when they brought in Peter Rummell as CEO.  Rummell was a real estate developer, with previous stints at Avrida and the Disney Development Company before joining St. Joe.  Rummell took to St. Joe's real estate assets and repositioned the company as an upscale developer.

St. Joe's fortunes boomed and busted with the Florida real estate market in the mid 2000s.  One savy move management made during this period was to raise $570 million in equity during 2008, otherwise it might not have survived the financial crisis.  As a result, today the company has very little debt and plenty of balance sheet flexibility.

"Field of Schemes"
Fast forward a couple of years and St. Joe had basically shut down its operations as the real estate crash brought its business to a halt.  Despite being near ground zero of the crisis, St. Joe was slow to take material write-downs of its real estate assets.  This caught the attention of hedge fund manager David Einhorn and in October 2010 he presented a very detailed, well thought out short thesis on St. Joe (a must read if you're considering investing).  He also argued that after all the money and effort, St. Joe made very little money in the development of real estate and should be valued at roughly the value of their rural forestry land, or about $1,500 per acre.

St. Joe Today
Since David Einhorn's presentation, much has changed at St. Joe.  In March 2011, Bruce Berkowitz took control of the company becoming Chairman and brought in Park Brady (formerly of Leucadia National), eventually elevating him to CEO.  After Berkowitz came aboard, St. Joe took a large write down on the improvements and capital expenditures previous management made to their real estate of $375 million.  Much of these write downs were on the same properties Einhorn went into such great detail examining.

(1) AgReserves Timberland Sale
On November 7th, St. Joe sold 382,834 acres of its "non-strategic" timberland and rural land to AgReserves for $565 million, or for $1,475 an acre (which gave the appearance of a victory for the short thesis).  This sale represents substantially all of St. Joe's forestry land, so they'll be out of this commodity business once the deal closes.  The tricky part of the transaction will be structuring it to be as tax efficient as possible; the land has a cost basis of $54 million, creating a large taxable exposure.  St. Joe does have $76.8 million in Federal net operating loss carryforwards that will be exhausted after the sale, they're also exploring a combination of cash and timber notes that could reduce their tax liability.

(2) RiverTown Sale
On December 31st, St. Joe entered into an agreement to sell their RiverTown community to Mattamy Homes for $43.6 million, with an additional $20-$26 million coming at the end of 5 years associated with impact fees.   RiverTown is a community located outside of Jacksonville and was deemed as non-core to St. Joe's strategy of concentrating their time in Northwest Florida.  The net carrying amount of RiverTown was $16.7 million on the balance sheet, so there will be a small tax impact here as well.

I believe the more important transaction of the two is the RiverTown sale despite the smaller scale, this transaction received considerably less press coverage but is more telling of the potential value hidden in St. Joe.  RiverTown was one of David Einhorn's "ghost towns" that he prescribed very little value to, however this transaction works out to a sale price of roughly $10k per acre.  What other assets have recovered in a similar fashion?

What's Left?
After both sales, St. Joe will have roughly 180,000 acres concentrated in northwest Florida.  St. Joe has communities with very inspirational names like WaterSound Beach, Windmark Beach, and Rivercamps targeting both the baby boomer retirement market (will newly surging 401k accounts encourage baby boomers to splurge?) and second home buyers located in nearby southeastern states.  St. Joe has stated they intend to invest capital in these residential communities going forward and potentially building out a Villages like active adult community (with additional retail and commercial buildings).  I would prefer they invest in commercial and industrial properties (like they have built for Exelis), but the residential base isn't there yet to build commercial properties in scale, they need more residents to support it.


There is some potential for commercial properties that could generate meaningful operating income.  St. Joe donated land to build the Northwest Florida Beaches International Airport, which opened in 2010 and hasn't been a tremendous success.  A quick Google Map of the surrounding area shows minimal development, but this is where the value in St. Joe's is; long term operating income producing properties. 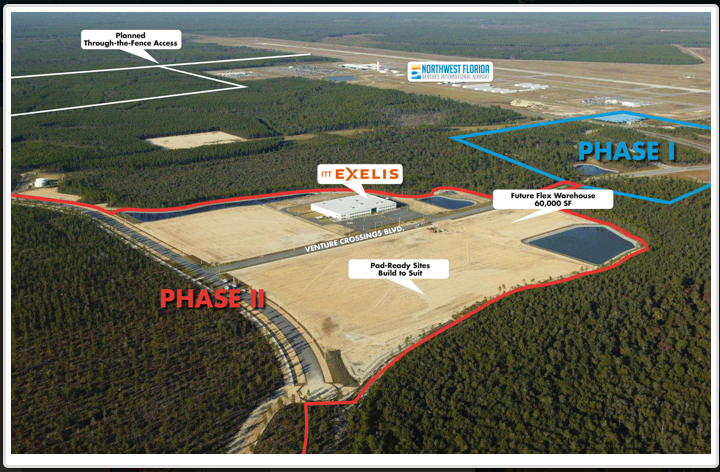 Southwest Airlines is the main carrier with Delta also running a few flights back and forth to Atlanta, but this is a pretty empty airport at the moment.  Again, the area needs more residents before the more flights are added, additional carriers are added, and the eventual gain in property values in the surrounding area.  There's also the Port of Port of St. Joe, which with some additional investment could be the closest port to the renovated Panama Canal, and the Pier Park North project is another nice retail project to add recurring income to the St. Joe portfolio.

Cash & Investments
After the two asset sales close, St. Joe will be left with a lot of cash, but a pretty restrictive investment policy of 50% in cash and the rest mostly in government securities with a small bucket of corporate debt (which is in Sears and JC Penney).  Ideally, Berkowitz would have free reign allocating capital wherever he sees the best value, but St. Joe wants to avoid the burden of becoming an Investment Company.

With the recent asset sales, St. Joe now has approximately $700 million per share in excess cash (this is a guess, tax consequences for the asset sales is a little hazy) for Berkowitz to allocate.  Previous management was criticized for spending money on development with very little ROI, but I would imagine that will change considerably going forward with an investment focused Chairman and his hand picked management team.  That's really the crux of a long thesis in St. Joe, faith in management to no longer waste shareholder funds on low return opportunities.

Back of Envelope Valuation
A quick and dirty ex-cash valuation of St. Joe's remaining acreage is as follows (I'm ignoring debt, and cash due from the pension termination):

If the RiverTown assets were worth ~$10k an acre, and it was a legacy bust asset, how much is the remaining core real estate worth?  Yes, there's a lot of rural land surrounding the airport and other non-entitled land, but I believe the current market price provides a reasonable margin of safety with the opportunity to invest alongside a great investor.

Risks
I see a few big risks to the St. Joe thesis (there are few ideas in today's market without considerable risks):

Conclusion
Overall, I see some loose parallels to Howard Hughes Corporation, although I think St. Joe's assets are farther out from being realized, its going to be a slower transformation.  Bill Ackman and Bruce Berkowitz are similar investors (Bruce was also an initial investor in HHC, but he has since sold his position); Ackman tends to be more of a pure activist, but both are willing to hold positions in the face of adversity and are concentrated long term holders of high conviction investments.

Disclosure: No position, but like New Media, strongly considering.
Posted by MDC at 9:31 PM