I did another lunch investment pitch roundtable today, this time the topic was "Impact of Technology on Communication and Stocks".  I was already looking into the recent news/print spinoffs, so I decided to squeeze them into the topic and pitch the whole basket.

Below is my deck with some commentary, outside of News Corp and New Media Investment Group, I've only looked into these spins at a surface level, so some numbers might be completely wrong.  But the sector seems attractive as its bottoming and figuring out the correct corporate structure, digital strategy and industry dynamics to survive. 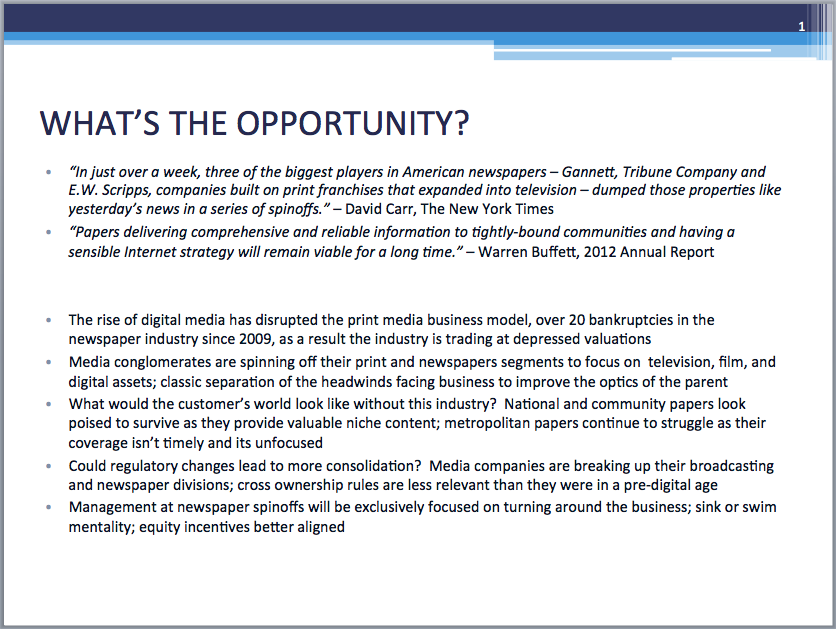 The first quote from David Carr of the New York Times came from his column "Print Is Down, and Now Out" published on 8/10/14 after the announcement of Gannett's newspaper spin.  His column and this quote sum up the consensus view of the newspaper industry, it's ugly, unwanted, and destined for red ink in the digital age.  However, news and content is still valuable, it just needs to be more tailored to its audience.  A (digital) subscription to The Wall Street Journal is virtually a requirement for anyone in finance or a senior management position in corporate America.  On the other end of the spectrum, community newspapers are the only news source for many small cities and can provide valuable targeted advertising.

As for the spinoff dynamics, most newspapers have been essentially hiding within otherwise growing media conglomerates, by exposing the print business, management will be forced/incentivized to adapt their product to the current marketplace. 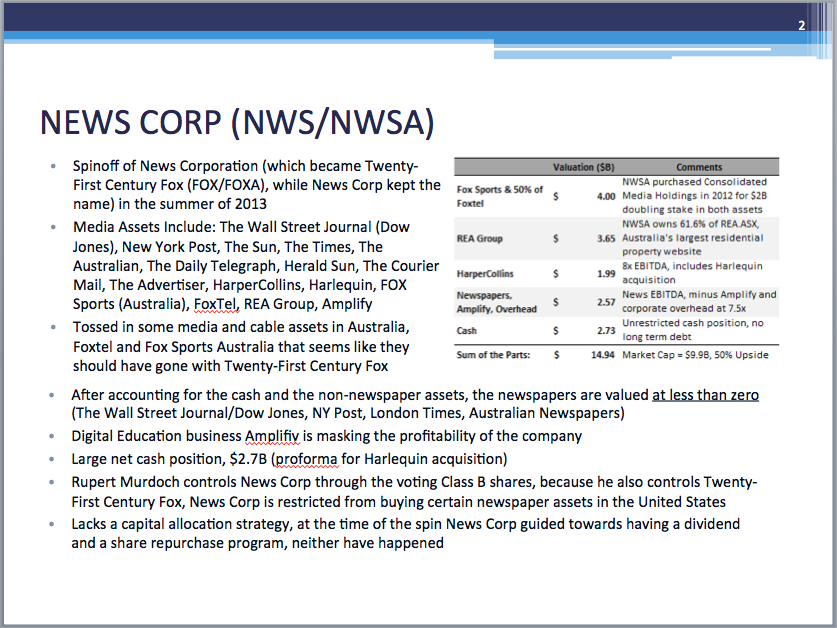 There's nothing really new in this slide compared to my post on News Corp nearly a year ago, but REA Group's market value continues to rise, Harlequin was added, and hopefully Amplify is closer to wider acceptance.  One minor complaint, the quarterly conference calls sound like management is telling a story rather than a business update, makes the lack of a clear capital allocation plan even more of a concern.  But it's clearly cheap. 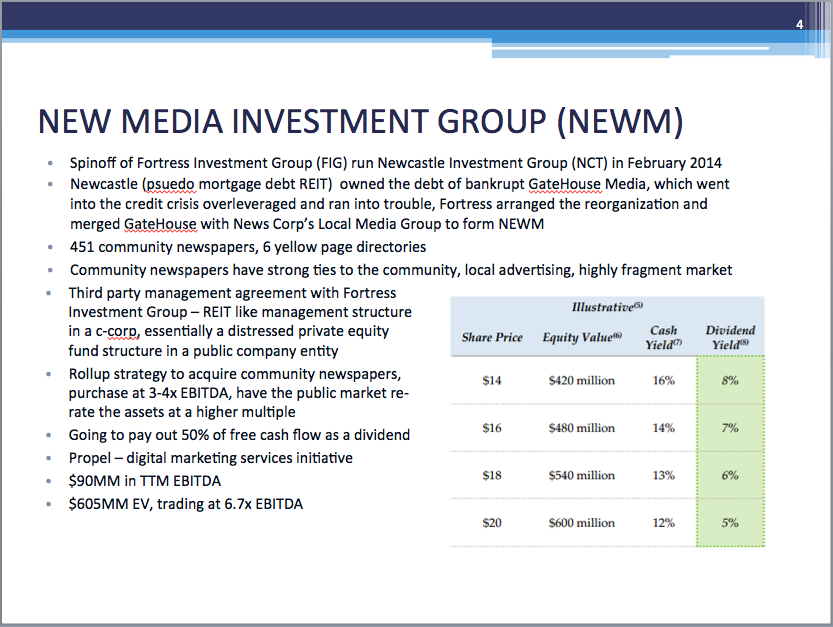 This is another update slide for blog readers, I'm still on the fence about New Media, like the strategy but I remain concerned about the third party management agreement and how that might be bought out or internalized.  Fortress is a savvy shop, and they've executed on the plans they've laid out.  Their quarterly presentations are transparent, a little promotional, but it clearly presents the investment thesis and should net investors high teen returns as they buy local papers cheap and they're rerated in the public markets. 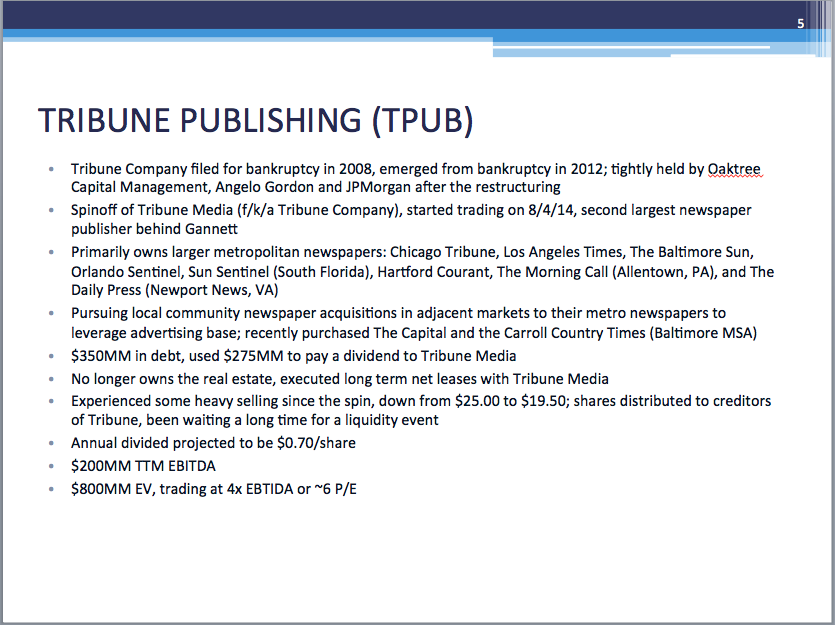 Now we get to recent spins, Tribune Publishing is the riskiest of the bunch, its leveraged and doesn't have the benefit of its real estate assets.  Its papers are primarily large metropolitan newspapers, a segment that's similar to a JCPenney's in the retail space, stuck in the middle without a loyal customer base.  However, its very cheap and has a lot of upside if turned around, parent Tribune Media emerged from bankruptcy about 2 years ago and former creditors (unnatural holders) might be taking advantage of the liquidity of an NYSE listing and selling. 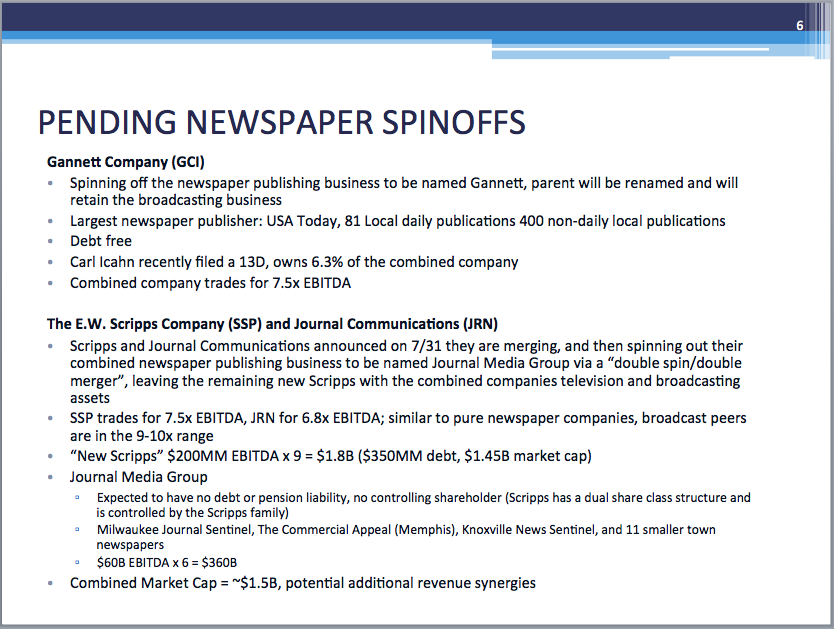 The newspaper spins really picked up in the last two weeks, Gannett announced they were going to spin off the publishing business earlier in the week.  I don't know the exact timing of the filings, but Carl Icahn curiously filed a 13D after the spin was announced, suggesting the spin.  There might be some upside left, but this transaction is well publicized and pretty straightforward.

E.W. Scripps & Journal Communications
The more interesting transaction is the "double spin/double merger" of E.W. Scripps and Journal Communications, where both will combined their TV/radio broadcast divisions and then spinoff their newspaper segments into a new company to be named Journal Media Group.  Both companies would be free of cross-media ownership rules and could therefore pursue acquisitions in markets they were restricted from as combined broadcast and print companies.

Today the two companies have a combined $1.5B market cap, if you take management's guidance of $200MM EBITDA and use a 9x multiple (low end of comparable broadcast companies due to radio exposure) the "new Scripps" is worth roughly the current market cap and you get the Journal Media Group newspaper business "for free".  It's a complicated transaction that won't close until sometime in 2015, and there are more merger details including a $60MM special dividend to Scripps shareholders, but with more consolidation in both industries likely, it initially appears to be an attractive deal for both future companies.

Each of the recent spins are a little different, but as a group they should outperform the broad market over a 2-3 year time.  I could also see regulations relaxing in this space, newspapers/radio/local TV entities aren't as influential as they once were, encouraging more consolidation.

Disclosure: I own shares of NWSA
Posted by MDC at 1:52 PM