BioFuel Energy (BIOF) is a shell company with $181MM in net operating losses that I first toyed with in April as Greenlight Capital and developer James Brickman proposed the NOL shell buy JBGL Capital for $275MM in a convoluted transaction that many including myself misjudged.  Combining the star appeal of David Einhorn with the previously sexy BIOF ticker and a small cap float, the company became a favorite of day traders.  I let the price action and the craziness of others skew my view of how the rights offering math worked and the underlying transaction's value.

JBGL Capital is a residential land developer with 4,300 lots spread pretty evenly between the Dallas-Fort Worth and Atlanta markets.  They own a 50% interest in a few different home builders that operate in their communities, this appears to be a point of emphasis going forward as the home building margins are better than just straight land sales, but there is value in the hybrid model.  JBGL was formed in 2008 during the financial crisis and as a result doesn't have the legacy issues of other home builders, also much of the land on the books is likely understated.

To reiterate, the $275MM price tag will be paid as follows:
Additionally, Third Point agreed to backstop the rights offering and is expected to own 16.7% of the shares.  After the rights offering is completed 75% of the shares will be in the hands of essentially insiders (85% if you look at it on an enterprise value basis), these shares will be relatively restricted due to the NOLs, aligning insider interests with long term shareholders.  Real estate development requires smart capital allocation, and it seems to be a natural fit to have an asset manager like David Einhorn as the Chairman of the Board (see Bill Ackman at Howard Hughes).

Proforma Income Statement
Eventually the market momentum traders will exit and fundamental investors will move in and value the company based on its assets and earnings stream.  Below is the proforma income statement for the first six months of 2014, there are few items included in the proforma that are hiding the true earnings power of the new Green Bricks Partners (it will lose the BioFuel name after the transaction is finalized). 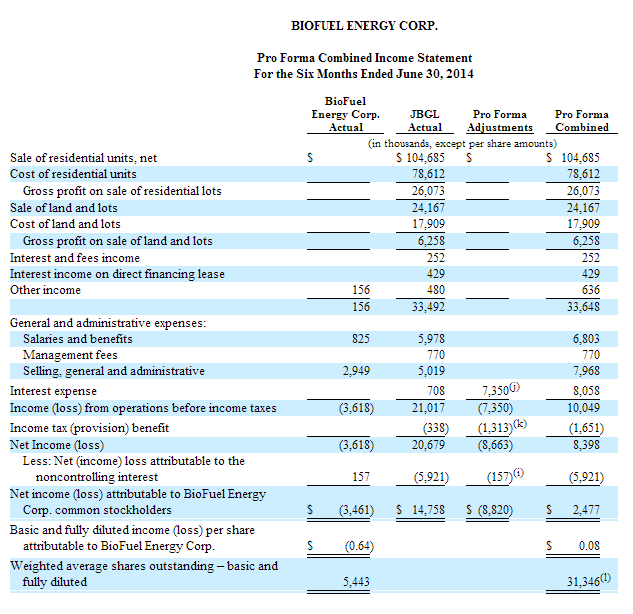 The SG&A at BioFuel Energy is overstated and double counted with JBGL this year as the company evaluates and goes through this reverse merger process, strip out $3MM there.  Additionally, the proformas are including a 40% income tax expense even though taxable income will be shielded by the NOLs for the foreseeable future, add back another $1.6MM.  Lastly, the interest rate on Greenlight's debt is above market and should be refinanced after Green Brick seasons a bit as a credit.  At a 7.5% interest rate, Green Brick would save $1.73MM over the six month time period. Making those adjustments and the proforma Green Brick Partners would have net income of $0.28 per share, or $0.56 per share annualized.  Even putting a 15x market multiple on Green Brick, and the shares could be worth ~$8.40.  Keep in mind that management has projected 50.4% revenue growth in 2015 creating additional potential upside as BioFuel transitions to Green Brick Partners and becomes valued as an operating company versus an NOL shell.

Duff & Phelps Fairness Opinion
Another fun piece of this transaction is the Duff & Phelps fairness opinion of the $275MM price tag for JBGL Capital.  Fairness opinions are used by boards as a CYA tool, almost always the adviser hired by the board will back into the price paid by cherry picking comps and adjusting the discount rates around to achieve the desired result.

I would argue that both the 14-16% discount rate is too high and the 9-10x net income terminal value is too low, using the lower end of both (16% & 9x) Duff & Phelps was able to back into the $275MM number.  Using more reasonable values would result in a much higher value for JBGL.

As I write this, BIOF is trading for $6.21 and BIOFR is trading for $3.03 (implying a $6.34 share price (2.2445*5+3.03)/2.2445)) making BIOF the better bargain, but the relationship has been moving around a lot so double check before making any decisions.  BIOFR also includes the possibility of an over-subscription allocation that could sweeten the pot a bit as well.  I didn't anticipate Greenlight putting such a valuable asset inside of BIOF, but in hindsight it does make sense as it needs to generate a lot of taxable income to monetize the NOLs and make the transaction worthwhile.

Disclosure: I own BIOFR, plan to fully subscribe to the rights offering
Posted by MDC at 12:45 PM