Another interesting yet complicated transaction that was announced in 2014 and closing soon is the "double spin, double merger" of The E.W. Scripps Company (SSP, "Scripps") and Journal Communications (JRN) that will create one pure play broadcasting company and one pure play newspaper company from two mixed local media companies.

Scripps is the larger of the two and owns 21 local television stations as well as mid-size and community newspapers in 13 markets.  Journal Communications owns 14 television stations and 35 radio stations in 11 states, along with the Milwaukee Journal Sentinel and several community newspapers in Wisconsin.  Following the completion of the transaction, both companies will have strong balance sheets compared to peers and will be in a position to continue consolidating their respective industries.  The new Scripps (the broadcast company) will be the fifth largest independent TV broadcasting company and will have dual tailwinds of increasing retransmission fees and 2016 political ad revenue in key swing states.  The new Journal Media Group (the newspaper company) will have a net cash position, strong free cash flow, and will be in a position to make accretive acquisitions.

Neither industry is incredibly exciting, I hate the local TV news, but there's a demo that still watches it regularly and it's the best medium for politicians to sling attack ads at each other.  Warren Buffett has made investments in both industries in recent years and with the increased deal and spinoff activity, it's a natural place to look for ideas.

Transaction Details
On the closing date (early Q2), Scripps will spinoff their newspapers into the Scripps SpinCo entity, and Journal will spinoff its newspaper business into Journal SpinCo.  Following the consummation of the spinoffs, the two newspaper spinoffs will merge to form Journal Media Group (JMG).  All on the same day, Scripps will pay a $60MM special dividend to their shareholders and then merge the remaining Scripps and Journal broadcasting businesses to form the new Scripps as a standalone television and radio broadcasting company.  Both companies will be free of cross-media ownership rules and could therefore pursue acquisitions in markets they were restricted from as combined broadcast and print companies.

E.W. Scripps (new)
The new E.W. Scripps Company will own 34 television stations reaching 18% of households (well below the 39% FCC maximum), 34 radio stations, a few digital properties, and the Scripps National Spelling Bee.  The Scripps family will maintain control over the new Scripps with 93% of the vote via the Class B shares.  Scripps has shown prudent capital allocation in the past, they sold their cable business, spun-off the wildly successful Scripps Networks Interactive and bought back shares following the great recession.  Controlling families aren't ideal, but part of the media landscape, there are worse families to be attached to than the Scripps.

The local news seems to exist just to run political ads, Scripps GAAP profit alternates between windfall and breakeven every other year based on the election cycle.  With no incumbent president and both parties moving more and more to the extremes, expect another big spending year in 2016.  The new Scripps will have a strong political footprint with television stations in important swing states Florida, Ohio, Michigan, Wisconsin, and Colorado. 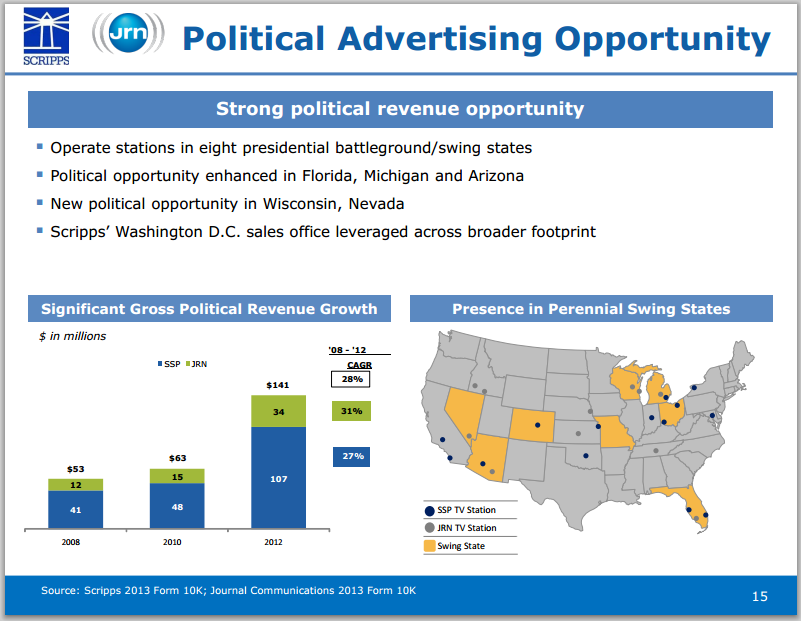 Scripps will also have the tailwind of the controversial increasing retransmission fees, currently their fees are well below industry averages and will step up drastically in 2015 to $165MM.  Cable companies, broadcast companies, and content companies are all in a race to consolidate in order to increase their leverage at the bargaining table.  At some point the consumer is going to push back on rising cable bills, over-the-top options like Netflix and HBO-Go are already disrupting the industry to a certain extent.  All things to keep in mind when considering retransmission revenue trends.

Another advantage Scripps will have is a strong balance sheet with just 2x EBITDA in debt, whereas others in the space (Sinclair or Nexstar) are in the 3.5-5x EBITDA range.  The company highlights their 18% market share and how it's well below the FCC maximum of 39%, I wouldn't be surprised to see Scripps add stations to its portfolio.

Below is a table of comparables for the new Scripps, both television and radio broadcasting companies:

For the new Scripps revenue is highly cyclical based on the election cycle, so it makes sense to take a blend of expected 2015 and 2016 EBITDA, I'm coming up with $263MM based on the joint proxy statement.  Using a 8.5x multiple (average of the above comparables is 9.2) and ~$365MM in net debt, I come up with an expected market cap of $1.87B for the new Scripps.

Journal Media Group
JMG will be a fairly simple business to analyze, it will have the flagship Milwaukee Journal Sentinel, roughly a dozen other smaller newspapers, no debt or pension shortfalls, and it will own its facilities and real estate.  Basically the exactly opposite start that was granted a similar spinoff in Tribune Publishing (TPUB).  It will be led by Timothy Stautberg, currently the head of the newspaper business at Scripps but who has a background in finance and was formerly the Scripps CFO.  With the trend of newspaper consolidations and spinoffs (will likely lead to another round of mergers) it's a benefit to have a finance guy in the CEO role.  JMG will be in a position to implement a similar strategy to New Media who have been successful at rolling up smaller weaker players at 2-4x EBITDA and having the market re-rate them higher.

Below is a table of comparables for the new Journal Media Group:

New Media likely gets a higher multiple due to the dividend retail crowd, I would anticipate JMG initially trading more inline with Lee Enterprises and McClatchy, but for conservatisms sake let's put a 5.5x EBITDA multiple on the company.  Using 2015 projected EBITDA from the joint prospectus of $57MM, and a net cash position of $10MM, the projected market cap would be $326MM.


Valuation Pieced Out Between SSP & JRN

Current Scripps shareholders will receive 69% of the new broadcast company and 59% of the newspaper company, plus a $60MM special dividend at closing.  Using the valuations above, both JRN and SSP are modestly undervalued at this point.  While there's not a ton of upside, there doesn't seem to be a lot of downside either considering both companies will be in a strong financial position compared to peers.  I picked up some shares of SSP recently, I'm mostly indifferent between the two but it might be initially safer to hold proportionally more of the new SSP versus JMG which could be sold off after the transaction (possible opportunity) as newspapers continue to be out of favor.

Disclosure: I own shares of SSP