Graham Holdings (GHC), formerly The Washington Post Company, has transformed in the past two years as they’ve sold their namesake publishing business to Jeff Bezos, completed an asset swap with Warren Buffett’s Berkshire Hathaway and most recently spun off of their Cable ONE (CABO) broadband business to shareholders.  The Cable ONE spinoff came with a lot of attention as another round of consolidation happens in the cable space, it's basically assumed (and priced accordingly) that Cable ONE won't be independent for long.  The spinoff has created an opportunity to buy the remaining Graham Holdings stub for an attractive, low-risk price.  What remains is a cash and securities heavy balance sheet with a collection of diverse businesses including 5 television broadcast stations and for-profit educator Kaplan along with the largest overfunded pension plan in the Fortune 1000.

Owner/operator Donald Graham and his family control the company and have filled the board with many respected investing minds including Thomas Gayner (Markel), Barry Diller (IAC, Expedia), and Chris Davis (Davis Select Advisors).  Don Graham also has close relationships with Warren Buffet and was formerly on the board of Facebook giving him additional access to advice and deal flow.  I'll break out the assets/business segments by easiest to the most difficult to value, but with a market cap of about $4.1 billion, an investor is roughly buying the cash, securities, discount pension asset and TV broadcasting segment while getting a nearly "free" option on Kaplan's turnaround, SocialCode's growth and a hodge podge of other businesses.

Cash, Securities, and Over-funded Pension
After the spinoff of Cable ONE earlier this month, which paid a $450 million dividend back to the parent, Graham Holdings should have around $1.1 billion in cash (including restricted cash) plus $215 million in securities - backing out the $400 million in debt equals a net cash position of $917 million.  If history holds, the company will use its recently increased share repurchase plan (659,219 shares or ~11% of the share count) to continue cannibalizing itself - the share count is down nearly 40% over the last 5 years.

Graham Holdings enjoys the enviable position have having a massively overfunded pension plan, most know the back story of a younger Warren Buffet purchasing shares of The Washington Post Company in the 1970s and convincing Katherine Graham to shun the traditional pension plan asset allocation model and instead invest in a heavily concentrated portfolio, including a big slug of Berkshire Hathaway.  That advice proved valuable and now Graham Holdings is sitting on a $1.15 billion prepaid pension asset on its balance sheet.   While its difficult to monetize such an asset, it does give Graham Holdings flexibility and potentially could lower its cost of capital when continuing to acquire smaller industrial companies that may have legacy unfunded pension liabilities.  For the purposes of a sum of the part analysis, I'll apply a 50% haircut to pension asset, or $575 million.

Graham Media Group (TV Broadcasting)
The company owns five local television broadcasting stations located in Houston (NBC), Detroit (NBC), Orlando (CBS), San Antonio (ABC), and Jacksonville (Independent).  I've spent some time this year on other broadcasting companies, it's a fairly stable high margin business with several tailwinds (2016 elections, spectrum auctions).  There are plenty of pure play public comparables and its a segment I could see Graham spinning off in similar fashion as Cable ONE.  There is a lot of consolidation activity happening in the broadcast space and a spinoff would allow for a tax efficient sale of the business unit.

Graham Media Group will do about $210MM in blended '15/'16 EBITDA, putting a 9x multiple on that fetches a $1.9 billion valuation.

Kaplan (For-Profit Education)
The most controversial of Graham's business lines is the for-profit education segment, Kaplan, which makes up the bulk of the post-cable spin revenues but comparably a much smaller piece of the profit and current value.  The for-profit education sector is a hated one, and a lot of that is for good reason, many in the industry are simply diploma mills that use aggressive marketing to appeal to low income students who are easily taken advantage of and rely almost exclusively on government guaranteed student loans to fund their tuition.  Many don't finish school and end up with hefty loan payments and no degree, those that do finish, end up with a degree of questionable value and limited job prospects.

Kaplan's business is broken up into three segments: Kaplan Higher Education (US based online university and professional education prep), Kaplan Test Prep (SAT, ACT, MCAT, GMAT, etc), and Kaplan International (a growing diverse set of businesses across mostly developed countries).  The US business is under tremendous stress as enrollment numbers have been cut in half over the last five years.  The business is a potential turnaround, it has sold its physical locations to focus primarily on the online market, and with the job market picking up, sentiment and job placement numbers should improve, the for-profit space is a highly cyclical business coming out of a deep trough.  Turnarounds in the public markets are extremely difficult as investors/analysts focus on quarter to quarter results.  As part of Graham, Kaplan's results are slightly hidden from view allowing them to take a longer term view in the face of increasing regulations.

In the 2014 annual letter, Don Graham makes the case that increased regulation might have a positive effect on Kaplan by taking out the bad eggs/weaker players in the market and increasing the barriers for new entrants.  Politically, the for-profit sector has a place as its going to be too difficult for any politician to take a firm stance against expanding college accessibility (and loans) to low income students.  Kaplan's name hasn't been as tarnished as others and with the backing of a strong holding company should be able to survive to see the light at the end of the tunnel.

Public comparables for Kaplan are all over the place, but with a blended EBITDA of $152MM across the three business segments, I'd argue it's worth at least 7x EBITDA, or $1.06 billion, with some upside to the multiple and EBITDA as earnings normalize across the industry.

Graham's financial disclosures aren't the best, all of these businesses are grouped together making them hard to value separately (maybe now that Cable ONE has been spun out and SocialCode is "significant", it will become its own reporting segment).  To be extra conservative, I'll use the book value of the assets of the "other category" in the latest 10-Q of $488 million. 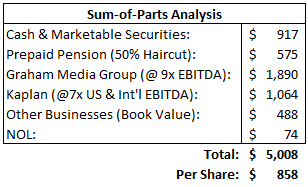 I come up with a value of $858 per share, which I consider a fairly conservative valuation depending how you choose to value SocialCode and the other businesses.

Risks:
The downside seems pretty limited, the company will be in the market buying back shares and you have a BoD and management squarely focused on increasing shareholder value.  Graham Holdings has run up a little since the spin, I bought it on the day it started trading regular way (7/1/15), but I think it has upside from here and have the intention of making it a core long term position.

Disclosure: I own shares of GHC