I was starting to get nervous there that American Capital (ACAS) would miss their own self imposed September deadline to file the Form 10 for their proposed BDC spinoff American Capital Income (ACAP), but on 9/30 ACAS filed a draft proxy statement (along with the Form 10) with several proposals to put to a shareholder vote that will move the long anticipated spinoff forward.

To recap my earlier post, American Capital will be spinning off a BDC that will pay dividends (hopefully attracting retail investors and raising the valuation), leaving ACAS with the management company that will have almost $23B in AUM inclusive of the spinoff (most of which is permanent capital).  The company pegs its current NAV at $20.35 per share, which includes the value of the management company, the stock currently trades for $12.50, a ~40% discount to NAV.

The BDC spinoff, American Capital Income (ACAP), will be one of the largest BDCs and has a close peer in Ares Capital Corp (ARCC).  Both implement a similar strategy, are roughly the same size, externally managed, and the external managers are publicly traded.  But besides a more stable history, ACAP has a few hurdles to overcome before it can trade inline with ARCC's 92% of NAV.
Even given these challenges, ACAP should at least trade for 80% of NAV, or $3.3B, inline with its sister BDC in ACSF (which is a dedicated bank loan BDC) within a quarter or two of reinstating the dividend and overtime close the gap with it's closest peer ARCC.

New American Capital (ACAS)
ACAS will be primarily an asset manager with some assets set aside to seed new strategies/funds before they eventually get sold into those vehicles.  Including the new BDC, ACAS will manage 4 publicly traded companies, two BDCs in ACAP and ACSF, and two mortgage REITs in AGNC and MTGE, along with 14 private funds (private equity and CLOs primarily) totaling $22.75B in fee earning AUM (in some of their strategies they only get paid on the equity, not the assets).

82% of American Capital's assets will be in permanent capital vehicles which should garner a premium over time.  I have a hard time determining if they're good investors, but it's fairly clear they're good asset gathers.  Interest rates are likely to stay low for some time, forcing investors to chase yield, and most of American Capital's strategies cater to those yield chasers.  ACAS puts a value on the asset manager each quarter, the latest was $1.1B, I tried unpacking that in my earlier post in February so I won't rehash that now.  They're also going to include roughly $1B in investments on the balance sheet of the manager.  My guess is the asset manager is going to be the preferred security of the two and should be valued at close to $2.1B.

Incentive Plan & Option Tender Proposals
One of the primary knocks on ACAS is they pay themselves handsomely, siphoning off value from shareholders and re-directing it to insiders and management via stock options.  Many of their options were issued deep in the crisis, and don't expire for 10 years, just look at the CEO's: 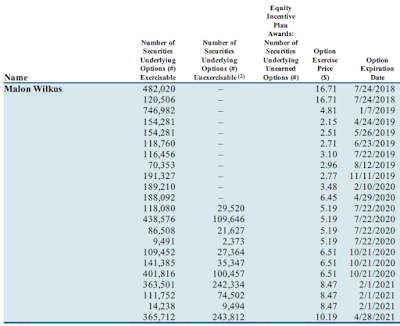 Even at today's depressed prices these options have a current value of $24MM, and they've created an overhang on the share price.  Adding to the dilution pain, because of the spinoff, employee options holders are forced to exercise their options (issuing shares below NAV) prior to the spinoff:


"... we are prohibited under the 1940 Act from issuing options in ACAP stock to American Capital employees."

"... because option holders are not able to participate in the spin-off and option holders have thus had to exercise vested options earlier than necessary and at lower than optimal prices, the options previously granted under our existing plans have lost significant retention value."

In their second quarter investor presentation they laid out the impact of employees exercising their stock options earlier: 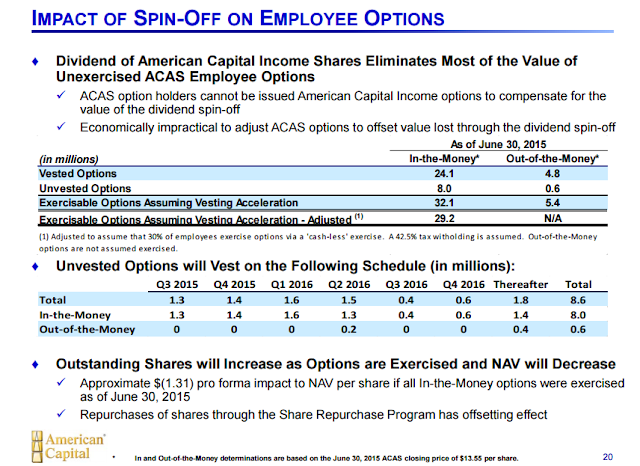 This dynamic has created some forced sellers in the market, presumably ACAS employees don't want to exercise their options ahead of the value unlocking spinoff, but they have to, potentially putting unwarranted downward pressure on shares recently.  On August 5, the company announced they would buyback $300-600MM worth of shares, in part to counterbalance the options being exercised and as of the end of the third quarter they bought back $134.6MM at an average price of $13.82 per share.

Tucked into the proxy, ACAS is proposing an interesting solution that would help both employees looking to exercise their in-the-money options and current shareholders who want to reduce the dilutive effects of the options.  By law BDCs can't issue shares below NAV without shareholder approval.  Typically this is a great protection as it prevents managers from increasing the share count, and more importantly their fees, at the expense of current share holders.  ACAS is requesting the ability to tender employee stock options and issue shares covering only the net after-tax gain amount on employee's options, versus the entire amount via exercising the option.  Essentially this would drastically reduce the amount of shares that would be issued below NAV due to employee stock options.  This maneuver may also additionally reduce the selling pressure by encouraging employees to hold onto to their newly issued shares.  They won't need to sell for tax reasons (the company would pay out the amount due in taxes in cash), and you'd reasonably assume that if they haven't exercised their options and sold already, they believe the shares are undervalued and would continue to hold their exercised shares.

Here's the example they use in the proxy filing:

Using current market prices and the actual ~32 million options outstanding number should actually produce a better result than the example above since options are worth less at the $12.50 stock price, meaning less cash for taxes and less shares issued below NAV.  It seems like a win-win both for share holders and employees, and I hope it passes.

Since the employee stock options will either be exercised or out of the money after the spinoff, another one of the proxy proposals is for the 2016 incentive plan.  The plan calls for an additional 8% of shares to be set aside for employee options and another 0.5% for non-employee board members.  This might strike some as just another round of management raiding the cookie jar but if the current management options are gone, then this new plan kind of presses the reset button, almost like a new spinoff issuing the new management "founder" incentive options.  Not ideal, but not completely terrible either as they're not immediately dilutive, although issuing any shares/options below NAV is going to be dilutive, so it's a careful balance.  I'm willing to give them a break on it.  Management's record of share buybacks and now the tender offer tells me they're not quite as bad as their reputation suggests.

At this point, my biggest concern is around the timing of the spinoff.  It's been a long time in the making and if the option tender proposal isn't approved, I'm worried that management will put off the spinoff to allow additional time for employees to exercise their options and that would put more downward pressure on the share price.  Back in July I added some calls that expire in January, seems now that was a little optimistic hoping the spin would happen before then.  Either way, this is still one of my favorite ideas and I'll likely add to it before the year is done.