Update time, I haven't discussed Green Brick for about a year - quick background:
On October 30th, Green Brick Partners fired their COO and took down their 2015 pre-tax income guidance from the $29-32MM range to $22-24MM, since then about $210MM in market cap (stock price was as high as $14.94 this summer, now $6.60) has been sliced off the company leaving the shares trading at a discount to book value (which includes the DTA).  The Q3 conference call held on 11/13 didn't provide much reassurance as the company admitted to misjudging their customers in Atlanta and building too high-specification homes that just weren't selling (fixable).  Combined that with their labor shortage issues in their Dallas communities (fixable) and the stock market has harshly penalized management who made the mistake of just reaffirming their original guidance in a mid-September investor presentation.  Where does that leave us now?

Homes aren't a fad product like say a GoPro camera or a FitBit wearable device where a guide down in the later half of the year could signal much larger demand problems.  We knew that Green Brick's revenue was going to be back loaded this year with the opening of two large communities (Twin Creek in Dallas and Bellmoore Park in Atlanta) happening in the fall.  While it's disappointing that both of these developments are facing issues at the same time, I get the sense that the revenue will simply get pushed back into 2016 and the current washout is a buying opportunity.  Both Dallas and Atlanta are high demand, growing, sun belt markets, and the housing market seems to have finally burned off most of the excess supply built leading up to the financial crisis.

With their unlevered balanced sheet, Green Brick should be in a position to additionally make acquisitions, there was a hint of that in the Q3 press release below, but I didn't catch any further commentary during the conference call.

"We are continuing to find attractive "A" location land investments that should translate into profitable growth for years to come. Since the summer of 2014, we have quietly been finalizing entitlements and planning on numerous land development opportunities. In the coming weeks and months, we expect to utilize our strong balance sheet to opportunistically pursue attractive land purchases and other prospects to improve long term shareholder value and accelerate our growth in 2016 and beyond." - Jim Brickman

These land investments would presumably be above and beyond what they already have projected to open in 2016 and 2017, including a "~30%" increase in communities next year: 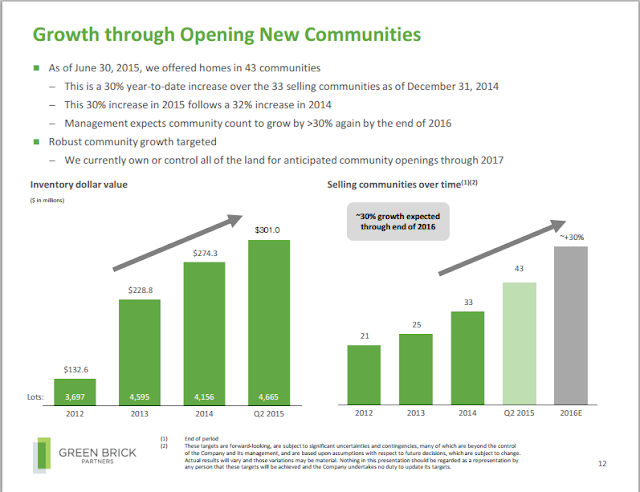 Net income figures below are projections pulled from Bloomberg and then Green Brick's own lower guidance, if I'm right about profits being pushed out to 2016 the shares look very cheap at just 13.5x 2015 pre-tax earnings, 90% of book value, and essentially a clean balance sheet.

I listened to people smarter than me and sold down some of my position around $12, but still held quite a bit through this slide and today bought back in at $7.00 most of what I sold.  Green Brick is of course partially a jockey play on David Einhorn (who is having a self admitted terrible year) and Jim Brickman, both remain impressive to me, and the structure of the company keeps them involved and encourages them to create long term shareholder value.  I wouldn't lose faith in either just yet off of a $~8MM drop in near-term guidance.

Disclosure: I own shares of GRBK
Posted by MDC at 4:25 PM