I mention from time-to-time that I co-host a monthly Special Situation Research Forum discussion group sponsored by CFA Society Chicago where we pick a specific company each month and have a deep dive discussion on it.  This month we picked Hilton Worldwide (HLT) which is splitting into three companies at the end of the year by spinning off its owned real estate into a REIT, Park Hotels & Resorts (PK), and its timeshare business, Hilton Grand Vacations (HGV), leaving an asset-light management company as the remaining parent.  The choice was made before the election and ensuing stock market run up, so while the situation is a little less compelling as one company today, as we've seen with RR Donnelley's (RRD) three way split, a lot of market distortions can happen in these scenarios which makes Hilton worth investigating ahead of time.

Background
Founded in 1919 by Conrad Hilton, Hilton Worldwide is the second largest hospitality company with over 4,800 hotels flying one of their brand's banners across 104 different countries.  Hilton was one of the largest leveraged buyouts before the financial crisis with Blackstone taking it private for $26B in 2007 and then subsequently taking it public again in 2013.  Blackstone made out surprisingly well in the deal, and since reappearing on the public markets Hilton has been following the trend towards an asset-light management company model.  To that end, earlier this year Hilton announced intentions to break up into three companies, which should happen by year end. 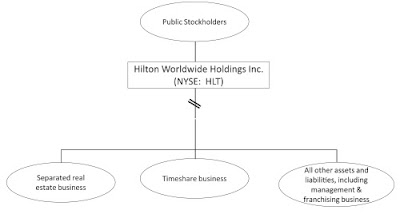 Why do the spinoffs?
Additionally, Hilton's larger rival Marriott (who recently merged with Starwood) has done similar spinoffs in the past of Host Hotels & Resorts in the 1990s (highlighted in Greenblatt's book) and Marriott Vacations Worldwide in 2011.  There's a clear precedent for this split-up and both Marriott spinoffs have been successful.  Hilton's current CEO, Christopher Nassetta, previously headed up Host Hotels and knows the playbook to make this a successful split-up.

Park Hotels & Resorts (PK)
The larger of the two spinoffs will be one of the last REIT spinoffs, Hilton secured an IRS private letter ruling before the crackdown in late 2015.  The new rule prevents spinoffs from converting to a REIT for ten years after the spin date, effectively eliminating the loophole.  Park Hotels & Resorts will be the second largest lodging REIT behind the old Marriott real estate spin, Host Hotels & Resorts (HST), and significantly bigger than the third largest in the sector.  Now that REITs are their own sector of the S&P 500, some active managers will be forced to add REITs where they were previously underinvested, as a sizable lodging REIT, Park Hotels might be a beneficiary of that index change.

Park Hotels will start off life with 36,000 rooms across 69 hotels, heavily tilted to their largest ten convention and resort style hotels below.  Due to their locations, these hotels are more difficult to replicate and thus face less competition than midscale and economy tier hotels in suburban locations.

Park will only have exposure to Hilton brands initially, but I don't see that as big of a problem as other single exposure REIT spinoffs as its an easier task to rebrand a hotel than say an Ameristar casino or an Olive Garden restaurant.  Park does intend to diversify away from Hilton's brands via acquisition, there are 22 public lodging REITs, some consolidation of this sector seems likely with another big player in the mix.  REITs are one of the few areas where M&A makes a lot of sense as operations are easier to integrate and G&A can more easily be cut at the target thereby spreading the parent's corporate expenses over a larger asset base.  Besides straight M&A deals, REITs can also take advantage of private/public valuation arbitrage, the public markets often times take shortcuts in valuing REITs (me included) and don't make cap rate adjustments for different local markets.  Assets in prime locations that would fetch very low cap rates are grouped in with the rest of a portfolio.  For example, last year Hilton sold the Waldorf Astoria hotel on Park Avenue to a Chinese buyer for 32x EBITDA, an amazingly high multiple, and invested the proceeds in Orlando and Key West hotels via a 1031 exchange at 13x EBITDA (still not cheap) as a way of recycling capital and showing higher EBITDA/FFO irregardless if the underlying real estate value didn't change.

Lodging REITs are on the riskier side of the REIT industry as their leases are the shortest, one night at a time, versus apartment REITs with 1 year leases, or office and industrial REITs that can have average lease terms of 10+ years.  It's not a great business, if it weren't for the REIT tax-free pass through status and investors desire for yield, Park Hotels would be the classic capital intensive bad business that the parent company is trying to shed via a spinoff.  Park puts up all the capital and has to pay Hilton 3% of gross hotel revenues, an incentive fee of 6% of hotel earnings and reimbursement of staffing and operating costs.  Lodging REITs are better than other franchisee businesses because of the tax-free pass through status, but otherwise it's very similar.  Although with corporate level taxes potentially coming down, REITs may lose some of their appeal.

Back to Park Hotels, a few of the particulars:
Host Hotels is the best and clear comp, however Park Hotels probably deserves a little discount to Host because it's not diversified among hospitality management companies and doesn't have the long track record.  Host trades for 11.1x EBITDA, Park should trade for at least 10x EBITDA, especially given their hotels in New York, San Francisco and Hawaii, plus remember they bought their Orlando and Key West hotels at 13x EBITDA.  Park will have $3B in debt and has proforma 2016 EBITDA of $775MM, at 10x, Park's equity value should be $4.75B or $4.80 per share of HLT.


Hilton Grand Vacations (HGV)
Timeshare spinoffs have been officially a thing for a few years now, Marriott spun off Marriott Vacations Worldwide (VAC) in 2011 and Starwood completed a spinoff via a reverse morris trust of their Vistana Signature Experiences timeshare unit with ILG (f/k/a Interval Leisure Group, ILG) earlier in 2016.

The latest timeshare spin, Hilton Grand Vacations will have more than 265,000 timeshare owners, 46 resorts, and over 7,500 units.  Since being acquired by Blackstone, Hilton has made over its timeshare business to be predominately an capital-light model where instead of developing and funding the construction of the resort themselves, Hilton Grand Vacations partners with third-party developers (PE real estate funds) who then contract out the timeshare share sales and resort management to HGV for a fee.  More than 75% of their timeshare sales now comes from this fee-for-service or a just-in-time inventory method versus 0% in 2009, this has greatly increased ROIC. 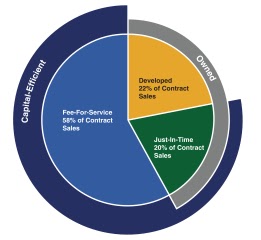 Another interesting dynamic of the industry is the lack of a secondary market for timeshares.  Once you purchase a timeshare, it's difficult to sell them because the industry makes it difficult by offering perks only to members that buy directly from them that secondary purchasers aren't eligible for.  Another big factor is that there's a lack of financing options for secondary market timeshares, no one will lend to them because there's essentially no collateral.  The timeshare companies themselves are willing lenders because if a loan defaults, that timeshare unit can be foreclosed on and put back into their inventory to be sold to another buyer rather easily.  That mechanism isn't really available to anyone else.

Back to HGV, Mark Wang leads the division now and will be the CEO once the spinoff commences.  He's been in charge of Hilton's timeshare operations for many years and as led the company through the current transition to an capital light business model.  Unlike Park, HGV doesn't plan to diversify away from the Hilton Brand and has signed a 100 year licensing deal to use the Hilton brand name in exchange for 5% of timeshare sales.  Mark Wang has done an admirable job at HGV, they've grown timeshare sales every year through the recessioin, with a CAGR of 7.9% from 2007 to 2015, outperforming the industry, which experience a decline of 2.6% over the same time.

Marriott Vacations Worldwide (VAC) is a pretty good comp, their business segments are nearly identical with Hilton Grand Vacations being a little farther along in their move to a capital light model.  VAC trades for about 8x EBITDA (excluding securitization debt), HGV's proforma 2016 EBITDA is expected to be $380MM and it will have $500MM of non-recourse debt, at 8x EBITDA the equity value of HGV should be $2.54B or $2.56 per share of HLT.

At a $2.5B market cap, Hilton Grand Vacations has the potential to be sold by large cap indexes and unlike Park Hotels & Resorts, HGV won't pay a dividend and doesn't have the REIT investor backstop, in my mind it has the most potential to be mispriced following the spinoffs.

Hilton Worldwide (HLT)
Following the spinoffs of PK and HGV, the parent Hilton Worldwide will generate over 90% of its EBITDA from fee based capital light sources, the remaining 10% from owned hotels which should go down over time in smaller owned hotel sales and as the fee based business continues to grow organically.  Hotel management is a great business as others put up the capital to develop and construct the hotels and then contract out to the likes of Hilton to manage the hotel and be included in their rewards program (HiltonHonors) which brings immediate patronage that being an independent hotel otherwise wouldn't.

Hilton is able to grow very quickly with minimal additional invested capital, since year end 2007, as shown below, Hilton has invested $184MM in the fee businesses which has created an additional $726MM in run rate EBITDA. 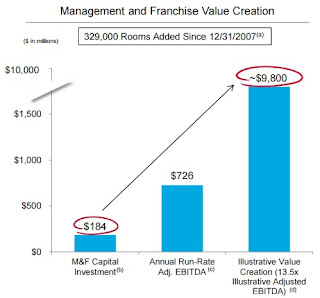 Hilton's pipeline is equally impressive, they currently have 789,000 rooms in the system or 4.8% of the global supply, but have over 21% (288,000 rooms) of the new development pipeline (again at minimal additional investment), which should drive growth for years to come.  Next year they expect to add 50,000 - 55,000, or a growth rate of about 6%  from current levels, much of this growth is in overseas markets. 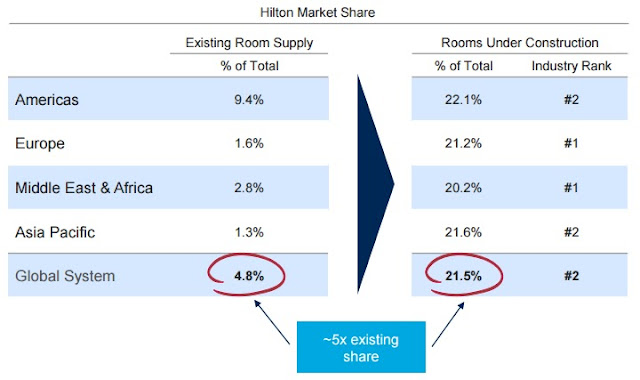 What will Hilton do with their cash flow?  Management's plan is to maintain a low investment grade credit profile, dividend out 30-40% of recurring cash to shareholders, with the remaining cash flow available for share repurchases in a new program to be initiated after the spinoffs occur.  So with Hilton, you have a business that needs very little capital to grow and will return the vast majority of cash to investors via dividends and share repurchase, the best of both worlds.  Marriott paid 14x EBITDA for Starwood earlier this year, backing out a takeover premium and valuing Hilton at 13x EBITDA seems reasonable to me.  At 13x, with $1.76B in 2016 EBITDA and $6.1B in debt would make the equity worth $16.8B or $16.97 per share of HLT.

Adding up the three pieces and I come up with $24.33 per share, a slight discount to the current share price of $25.31 and the $26.25 that HNA Group recently paid for a 25% stake from Blackstone (BX).  This is more of a growth situation than value, and much of the valuation rests on Hilton Worldwide's EBITDA growth trajectory, which since it's not the spinoff, we have little insight into how they've calculated the proforma 2016 EBITDA.  They've disclosed approximately $200MM in transaction expenses, which seems extreme to me, and there's roughly $180MM in management and licensing fees coming from the two new spinoffs into the parent.  If those aren't included in the proforma number or somehow netted against the transaction costs, that would be an additional $2.36 per share in value, plus the additional organic growth coming online in 2017.  I've seen 2018 EBITDA estimates above $2B for proforma Hilton.  The company is hosting an investor day on 12/8, maybe we get some more clarity on the parent at that time.

For now I've just purchased a placeholder position via just in the money January 2018 calls.  If the growth strategy works out, so will my LEAPs, if not, I've limited my downside.  Once the spinoffs occur maybe one of the three will be more interesting as the investor bases turnover.