The calendar can sometimes play tricks on the way returns look, now in hindsight 12/31/18 was a tough determination date skewing my 2018 results to the downside and now is skewing my 2019 results to the upside.  Through the end of the second quarter my blog portfolio is up 58.3% versus 17.9% for the S&P 500, the big first half has pulled up my lifetime-to-date IRR to 22.5%.  Outsized winners this period included KAR and SMTA due to sizable call option positions and then to a slightly lesser extent big wins in CZR, HHC and MMAC. 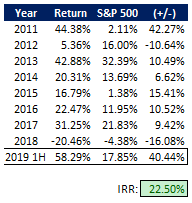 Often when I post an idea it's sort of an initial indication of interest, usually starting with a 3-5% position for me, and then in the comments section I get more bullish or bearish on an idea.  KAR Auction Services (KAR) was one of these, I liked the idea and the spinoff of IAA in January, posted on it, received some feedback so when the company conducted an odd conference call in February and the stock subsequently sold off, I was ready to act.  Ended up buying a large (for me at least) position in call options that paid off handsomely, although I sold too soon (last week) given the price movements today on the first day of regular way trading.  IAA looks fully priced to me.  KAR looks potentially cheap depending on how you value TradeRev and RemainCo's closest public peer, BCA Marketplace in the UK, was sold this week to private equity for 12x EBITDA.

Portfolio as of 6/30/2019:
Disclosure: Table above is my blog/hobby portfolio, I don't manage outside money, it's a taxable account and a only portion of my overall assets.  The use of margin debt, options, concentration doesn't fully represent my risk tolerance.
Posted by MDC at 4:29 PM