Extended Stay America (STAY) is the last remaining public company of size that is an integrated hotel operator and owner of their real estate in the United States (other than Hyatt which is family controlled).  As their name suggests, they compete and are the largest player within the extended stay lodging segment where the average guest stays anywhere from a week to several months.  Demand for the extended stay segment is typically not leisure driven, but rather temporary business assignments, training, relocation bridge housing, medical, or other needs that could span a few weeks.  Extended Stay America has a unique corporate structure where the publicly traded STAY is a "paired" stock, underlying STAY is a hotel management company ("Extended Stay America Inc") and a REIT ("ESH Hospitality Inc"), this structure provides most of the tax benefits of a REIT without the conflicts that can arise between OpCo and PropCo.  ESH Hospitality is 43% owned directly by shareholders via the paired stock structure and 57% owned by Extended Stay America Inc which pays corporate taxes on the dividends received from the REIT.  In the summer of 2018, the company announced it was exploring strategic alternatives with most assuming either a true spinoff or a sale of the management company to one of the hotel brand aggregators with a simultaneous spin of ESH Hospitality (similar to LQ/CPLG/WH last year).  Today, along with earnings, the company announced that it had concluded its strategic review and was going to maintain the status quo, the stock fell 5-10% on the news.

It had been over a year now since that strategic alternatives announcement, the first quarter conference call got a little chippy and some fatigue had built up in the investor base.  Given the relative size of the franchising business and where multiples in the sector are today (especially on the REIT side), I think the company made the right move and event driven sellers (along with the general slide in the market) are providing an opportunity to pick up shares of STAY at a discounted price.

Most of the value is in the real estate and not the management company (unfortunately), as of 6/30, the REIT owned 554 hotels with 61,500 rooms, the management company managed an additional 73 hotels for third parties with 55 more in various stages in the pipeline.  By maintaining the status quo, it allows the franchise side of the business to build up with new construction or conversions, plus ESH plans more asset sales to third parties.   But eventually, the company will succumb to pressure and split the company somehow.  How might that look?

Just to give an idea how STAY is valued today, it essentially trades at the bottom end of the limited service lodging REITs group despite not having to pay a third party management company for its owned properties and having a small franchising business.  Sure there is some tax leakage with the pair structure compared with a pure REIT, but the optionality (it's going to happen someday) on the sale of the management business should make it more valuable than REIT peers, not less.

The extended stay business model is fairly high margin (no frills, rooms cleaned once a week) and STAY generates a decent amount of free cash, roughly $325MM on their current asset base using a maintenance capex of 7% of revenues.  At today's prices, that's a 12% free cash flow yield to the equity.  Looking at it another way, using $80MM of maintenance capex on $564 in EBITDA, STAY is trading at 10x UFCF when they've been selling hotels at ~17x that metric over the past few years.  Management did caution today not to assume that 17x multiple on future asset sales, the next round will be their lower performing hotels, but it's still a useful read through to the disconnect between private and public multiples in real estate today.

Back to what a split might look like: ESH Hospitality would be another economy-midscale REIT similar to CorePoint Lodging (CPLG), it would have the most keys of any lodging REIT but a relatively small market valuation.  If we assume that STAY puts a similarly egregious management and franchise contract on ESH Hospitality as Wyndham/LQ did to CorePoint (I don't think this will be the case since most of the value is in the REIT) with a 5% management fee and a 5% franchise fee, I come up with the following back-of-the-envelope breakout between the two: 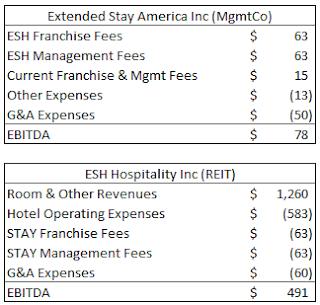 Sticking with the LQ/WYN comparisons, if we value the management company similarly to Wyndham Hotels (WH) at 12x and the REIT at 9x similarly to CorePoint Lodging (CPLG), STAY would equate to a combined value of $17+/share versus $14.50 today.  Again, I think this is the worst case split scenario as hopefully management has learned a lesson from CPLG and wouldn't put that management contract on the larger piece of the business.  If the market slowdown passes without a recession we could additionally see multiple expansion back to where lodging REITs traded in 2017-2018.  If the management company were sold versus split off, there would be additional upside as the G&A would essentially be wiped out, perhaps $20+ per share in total under that scenario using today's multiples.  To be clear, this split isn't happening in the near term, but it shows the underlying value in their operations and I believe it's only a matter of time before the market really forces management's hands.

Other thoughts:
Disclosure: I own shares of STAY (continue to own CPLG and WH too)
Posted by MDC at 1:41 PM