I've averaged down on a few current positions (possibly too early and unwise), many of which carry debt, are exposed to customers leaving their houses and are thus down significantly.  But I also wanted to look for a company that might be thriving during this crisis, debt free and can take advantage of people having too much free time.  One such company is SciPlay (SCPL), which a reader asked me to look at in the comments section on my post on Accel Entertainment (I still own despite all bars and restaurants being take out only in Illinois).  I feel like a click bait author associating this idea (which is admittedly a little scummy and not without hair) with the "stay at home trade" but SciPlay should accelerate their already healthy growth rate in this environment with casinos closed for at least the next several weeks, potentially much longer.

SciPlay is a social casino gaming company that was IPO'd off of Scientific Games (SGMS), a major slot machine manufacturer and casino supplier, in May 2019 to reduce SGMS's heavy debt load.  Scientific Games still controls SciPlay with an 82% ownership stake in the operating entity (this is one of those ugly Up-C structures).  Social casino games are free-to-play simulations of slot machines where there isn't explicit gambling occurring but players can purchase virtual tokens to move the game along faster similar to other freemium style mobile games.  I downloaded one of their games and didn't understand it, but SciPlay has 8 million monthly users, however only 6% of those actually pay up for virtual tokens but those users are quite valuable, paying on average ~$88/month (!!) for these in-app purchases.  SciPlay pays a 30% revenue share to Apple, Google, Facebook and the like to be on their platforms, a dispute with any would be an issue, but otherwise this is a decent enough decent business that spits off a fair amount of cash.

The proceeds from the IPO (priced at $16) were used to pay a one-time upfront $255MM licensing fee to Scientific Games for their intellectual property library which allows SciPlay to develop new games in the future based on popular slot machine themes like James Bond or the Godfather that Scientific Games has a license for the rights.  Scientific Games and other slot machine manufactures have years of experience creating and cultivating addictive gameplay -- the "Scientific" part of the name seems almost nefarious to me -- that gameplay design can be fairly easily translated to a mobile device.  SciPlay currently has 7 games, the most popular and the one that makes up 40-50% of their revenue is Jackpot Party Casino, its a few years old now but does receive regular updates, there is some fatigue risk to their revenue but so far they've shown the ability to extend the game's life.  The one risk that remains a bit untested is how online/mobile gambling being rolled out impacts the social casino games, SciPlay claims in states like New Jersey where mobile gaming is legal they see no significant change in their customers behavior.  The explanation given -- social casino is more of a mindless time wasting exercise or a way to learn about slot machines versus a true gaming experience, not sure I totally buy it, but I do see people on my commuter train (when I wasn't holed up in my basement) playing social casino games on the train in the morning.  Doubt that would be the same activity if its actual slot machine mobile gaming with an 8% rake, but then again, maybe the time wasting crowd aren't the 6% of users that are paying.

The share count and market capitalization of the company often appear wrong on free sites due to the Up-C structure where the public company only owns 18% of the operating partnership with Scientific Games owning the other 82% economic stake directly in the operating partnership. SciPlay finished 2019 up with $110MM in cash and no debt, the company did $122MM of adjusted EBITDA in 2019 or $94 million in net income before the non-controlling interest allocation.  This represented EBITDA growth of 30% over 2018, let's dial back the growth rate a touch (although I wouldn't be surprised if they matched or exceed that) and say they do $150MM in EBITDA in 2020.  Keeping the same revenue base and converting an extra 1% of users from 6% to 7% paying users through this casinoless time would do it. 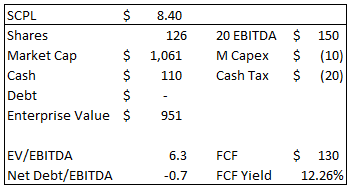 Even in a no growth environment, SCPL is trading at 7.8x TTM adjusted EBITDA (sorry if the price is stale by the time you read this), prior to the coronavirus market volatility, peers (ZNGA and GLUU) were trading at 14x 2021 EBITDA estimates, there's a big gap there between where 2021 EBITDA could be for SCPL and where the stock is trading today.

I bought a small amount, feeling a little guilty about the business model, but I'm not an ESG investor.

Other thoughts:
Disclosure: I own shares of SCPL
Posted by MDC at 11:04 PM