Acres Commercial Realty (ACR) is the new name for Exantas Capital (XAN) which was previously the new name for Resource Capital (RSO), which I wrote up back in 2016. The situation is somewhat similar to back then, while not a home run, there's a fairly clear path to a 20-30% near term return. Acres is similar to other commercial mortgage REITs, they provide transitional CRE loans so that borrowers can reposition a property (the risk is somewhere between a stabilized loan and a construction loan), traditional banks have largely been pushed out of this market.

Back in 2016, C-III Capital took over RSO and rebranded it Exantas, C-III cleaned up much of the messier non-CRE assets that were in RSO back then and for a while the company was a clean transitional CRE lender that used the securitization market via CRE CLOs to finance their loans on a non mark-to-market basis. Later, C-III then expanded into CMBS (transitional loans are typically shorter term, CMBS usually has stabilized loans underneath and adds some duration to the portfolio) which they financed through daily mark-to-market lending facilities, unfortunately the CMBS market saw a steep market value drop in March/April 2020 as liquidity dried up. Like many other mREITs, Exantas faced margin calls and was forced to liquidate much of that portfolio at a significant loss. While not the intended strategy, after the CMBS portfolio was largely liquidated, the company is back to a straight forward transitional CRE lender.

Oaktree and Mass Mutual came to the company's aid in July, provided rescue financing via 12% 7 year senior notes that also came with common stock warrants for a penny. At the same time C-III exited stage left and sold the management contract to ACRES Capital (Oaktree owns a stake in ACRES) who took over as the external manager. The ACRES team is mostly former Arbor Realty talent, Arbor primarily focuses on multi-family lending, which I anticipate being the primary focus going forward for ACR, the portfolio is already roughly 50+% multi-family so it shouldn't be a significant transition for the portfolio.

Earlier this week, the company completed the rebranding process to Acres Commercial Realty and simultaneously executed on a 3-for-1 reverse split. Oddly, the rebranding, corresponding reverse-split and ticker change to ACR, appears to have triggered a bit of a selloff in the company's shares for no apparent reason other than maybe market participants didn't follow the change from XAN to ACR. The new ticker doesn't show up in some of the more popular free data sites, while it sounds odd, the shares have dropped from above $13 to below $11 (~16%) in the couple days when the rest of commercial mREITs have been essentially flat.

The capital structure is very levered, most of the debt is CRE CLO financing, the first two CLOs have an attractive weighted average interest rate of about 1.50%, the one they did last September is at 3.28% when issuance was just restarting in the securitization market. Spreads have improved since then, whenever they do their next deal, I expect it to come in significantly.  The company did pause their preferred dividend for a couple quarters, but are now current again. 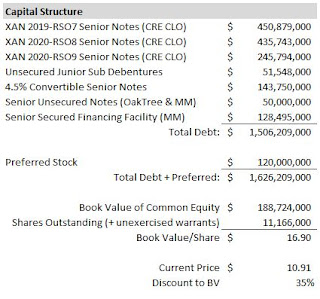 How the business model works on the debt side, Acres will originate new CRE loans utilizing the secured financing facility (5.75% interest rate, roughly what they earn on their assets) and once they build up a large enough portfolio, they'll obtain term financing via the CRE CLO market at significantly better terms. Now that Mass Mutual (financing lender) is also a shareholder via the warrants, makes sense that the new origination channel will open and available to Acres to continue new loan production and grow the business again. Back of the envelope, I have the earnings power at about ~$1.50/year to the common, and since the company has stopped paying the common dividend, book value should have built since 9/30.

Additionally, the company put in place a $20MM share repurchase program (roughly 15% of the market cap) that will be put to use quickly:

On November 2, 2020, the board of directors (the “Board”) authorized and approved the continued use of the Company’s existing share repurchase program in order to repurchase up to $20 million of the currently outstanding shares of the Company’s common stock over the next two quarters. Under the share repurchase program, the Company intends to repurchase shares through open market purchases, privately-negotiated transactions, block purchases or otherwise in accordance with applicable federal securities laws, including Rule 10b-18 of the Securities Exchange Act of 1934 (the “Exchange Act”).

Putting it together, book value has likely come up since 9/30 via earnings power and share repurchases, debt markets should be wide open to them as the new issuance CRE CLO market is surprisingly strong, especially to multi-family heavy portfolios.  I'm viewing this as more of a few month swing trade as the market "finds" ACR and their story, to potentially a bit longer if I want to stick around for a dividend reinstatement.  I'd put a target price at around $14-14.50, roughly 80-85% of where book value is likely to settle out.

Disclosure: I own shares of ACR