[This is marginal idea day, I have a few of these small positions I've started but don't really have the conviction to make them more than that, but others might find them interesting and in the interest pushing out some content, here we go]
Medley Management (MDLY) is an asset manager of private-credit or middle-market leveraged loan vehicles, it was previously the external manager of PhenixFin (PFX), a business development company ("BDC") that was formerly known as Medley Capital (MCC) prior to BDC's board terminating Medley's management agreement at year end 2020.  The loss of the MCC management agreement, alongside years of underperformance, dinged Medley's assets under management to the point the company's operating subsidiary filed bankruptcy protection on 3/7/21.  Today the company has about $1B in AUM, split between their non-traded BDC, Sierra Income Corporation ("SIC"), and some other separately managed accounts or private funds.
A little history, Medley Management was 5-6 years ago a semi-popular way to play the "permanent capital" trend, traditional asset managers were facing the same headwinds they do today with outflows and competition from cheaper indexed alternatives, however permanent capital managers were popular since they managed closed end funds like BDCs or REITs.  The closed end nature and generally punitive termination clauses in external management agreements make them highly valuable.  Medley took this valuable revenue stream, IPO'd it, took on leverage in the form of baby bonds (bonds that trade on exchanges, typically $25 par value like preferred stock) and paid a handsome dividend.  These baby bonds trade under the symbols MDLX and MDLQ, as part of the proposed bankruptcy plan, the baby bonds will be converted into MDLY common stock.  But prior to the current troubles, Medley had been underperforming for years, MCC had been trading a persistent discount to book value and was unable to issue shares.  In 2018, they came up with a plan to do a three-way merger that would combine MDLY, MCC and SIC together to form one large internally managed BDC (similar in nature to the ill-fated NSAM/NRF/CLNY merger), but that merger was challenged by shareholders from the get-go as a non-arms length transaction designed to prop up MDLY and enrich insiders, the merger was ultimately scrapped during the worst of the pandemic.
With that out of the way, here's where the story gets a bit more complicated, MDLY technically represents shares of Medley Management which is just a holding company that in turn owned a portion of the operating subsidiary partnership, "Medley LLC", Medley LLC is the now bankrupt entity that is the asset manager, where the majority of the employees technically work, etc., and most importantly, where the baby bonds were issued.  The remaining portion of Medley LLC was owned by two twin brothers, Brook and Seth Taube who were until recently co-CEOs together, they had the option to convert their units in Medley LLC for MDLY shares, normally you would never do this for tax reasons, but once it was clear that Medley LLC was in trouble and formally filing for bankruptcy, the Taubes converted their units in Medley LLC for shares in MDLY to maintain control of the company.  Their reason for this transaction was a fear that a change of control through bankruptcy would trigger clauses that would allow clients out of their management contracts.
Prior to the unit conversion, MDLY had 670k shares outstanding (after a reverse split), after the Taubes Medley LLC unit conversion the company has just over 3 million shares outstanding.  As part of the restructuring plan, MDLY will be issuing new shares to both classes of baby bonds and to Strategic Advisors, who were a minority investor in the entity that manages Sierra Income.  In 2018, MDLY bought out Strategic using seller financing, MDLY defaulted on the Strategic note in early February 2021, same time the company failed to pay interest on their baby bonds.  Here's what the plan contemplates for both sets of creditors:

Strategic Claim. The holder of the Allowed Strategic Claim shall receive: (i) 218,182 shares of newly-issued Class A Common Stock of MDLY; (ii) $350,000 in Cash on the Effective Date or as soon as practicable thereafter; and (iii) a secured promissory note, the form of which will be negotiated between the parties prior to the Confirmation Hearing, which provides for 10 consecutive quarterly payments of $225,000 in Cash, commencing on the last Business Day of the first full calendar quarter following the Effective Date.

The baby bonds are getting the short end of it here, clearly the equity is impaired at Medley LLC, but due to the structure of MDLY, management was able to remove themselves from the bankrupt entity and then now is forcing mostly retail investors to approve the plan or get less if they forget (which seems like fair amount would) or straight out reject the plan.  The SEC seems to agree, the SEC has an open investigation into MDLY, they recently had this to say in a court dock filing:

B. The Debtor’s Bankruptcy Case and Restructuring Plan

8. On March 7, 2021, Medley filed a voluntary petition for relief under chapter 11 of the Bankruptcy Code in the Bankruptcy Court for the District of Delaware (the “Court”). That same day, Medley filed the Plan which would exchange the debt owed to holders of the Notes for equity in MDLY.  The noteholders are among the Debtor’s most senior class of debt, as the Debtor has scheduled no secured or priority claims. Under the Plan, holders of the Notes are estimated to receive a recovery between 5% and 22.4%, depending on whether the noteholders vote in favor of the Plan. But because the recovery hinges on the market value of MDLY stock, noteholders could receive much less under the Plan. The Debtor has scheduled only $7.7 million in general unsecured claims, all but approximately $86,039 of which relate to one creditor. These claims are also impaired.

9. The Plan gives equity special treatment. Specifically, the Plan treats the Debtor’s equity interests as unimpaired and contemplates that unitholders—i.e., MDLY—will continue to own the reorganized Debtor. According to the Debtor’s CFO, equity interests remain unimpaired under the Plan in order to avert “material adverse consequences.” See Allorto Decl. [Docket No. 5], at 12. Specifically, “[t]he Plan is designed to avoid a change of control event through the Chapter 11 Case and limit the potential for client defections.”

10. It is clear from the first-day declaration and testimony at the Section 341 Meeting of Creditors that at no time prior to the petition date did the Debtor consider any strategic alternative that would have impaired the pre-IPO owners’ interests in the Debtor.

And then in a footnote, SEC hinted that a new revised plan might be coming, presumably one that would give the baby bonds more of the reorganized entity:

1 The SEC staff has informed the Debtor that the Plan is fatally flawed in a number of respects. In response, the Debtor has represented that the objectionable provisions of the Plan, including provisions violating the absolute priority rule, will be addressed in a forthcoming amendment, that the current hearing date will be adjourned, and that the SEC will have an opportunity to review and object to any amended disclosure statement. Although the Debtor has informed the SEC staff that the structure of the Debtor’s Plan may change, as of the date hereof, an amended plan and disclosure statement have not been filed, and the Debtor has not agreed to further extend the date on which the SEC must object to the retention applications. As such, the SEC has no choice but to file its objection based on the currently-filed Plan. The SEC reserves the right to amend this objection if and when such an amended plan and disclosure statement are filed.

So a better outcome might be coming thanks to the SEC pushing back, but even if the current plan remains in place, the baby bonds look interesting, both on their own and relative to where the common stock trades.  These are all fairly illiquid securities, but as I write this, the two baby bonds (MDLX and MDLQ) trade for approximately $2.30, MDLY trades for $5.70, at a rate of 0.60 MDLY per baby bond that's $3.41 of "value", 46% upside to where the bonds trade.  MDLY is extremely volatile and seems subject to the occasional pump and dump, so maybe the bonds are reflecting the true value and MDLY is just a meme stock trading sardine.

Some back of the envelope math, ignoring the $9.5MM investment in SIC and other cash/assets on MDLY's balance sheet, I get an enterprise value of approximately $23MM through the baby bonds for an asset manager with $1.2B in AUM, a lot of which is paying upwards of 1.75% in base fees. 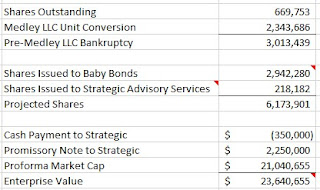 Seems kind of cheap?  Proforma normalized earnings is probably something like $1MM per quarter.  Now of course you have the Taubes still in control of this thing and assets to continue to flee, but loan mutual funds have seen huge inflows recently in anticipation of higher rates, defaults are at lows, I could see this market making a recovery and potentially benefiting even the marginal players like Medley.