Just to get this out of the way early, I don't own J2 Global (JCOM) and this spinoff is pretty dicey, but I find the setup pretty fascinating from several angles, more from a case study perspective and want to throw this out there in case others want to share their thoughts as well.

Consensus Cloud Solutions (CCSI) will be spun off from J2 Global in the coming weeks, Consensus is JCOM's legacy eFax business.  It is a high-margin subscription business, one of those that people often forget they even have especially if their employer is paying for it, that allows you to receive faxes in your email.  Surprisingly, many industries, particularly health care and financials are still heavy users of fax as it's viewed as a secure communication method.  Even if you only get a fax occasionally, you still want to have that capability to receive them and end up keeping your subscription until your last client stops faxing, even then you might keep it just in case.  But unlike Jackson (okay, some may disagree with that), eFax is a melting ice cube, faxes are converting everyday to other communication methods and I can't imagine many use cases converting from something else (snail mail?) to fax.

Over the past decade or so, JCOM has been using the cash flows from eFax to diversify their business by buying a bunch of legacy internet media companies, the parent after the spin will be renamed Ziff Davis (and trade as ZD) which is the old holding company name of PC Magazine.  In one more attempt to extract value from the eFax business, JCOM is effectively selling the company via a spinoff.  Their tax basis is too low to just sell it outright for cash, so instead they're going to encumber Consensus with $800MM in debt, which is about 4x EBITDA.  Probably not too different than what they'd be able to sell the business for entirely and possibly more than they'd get after tax.  Additionally, they're retaining just under 20% of the CCSI shares to divest over time, so it's really economically and strategically a sale from the parent's perspective.  That's going to leave a levered stub equity in a declining business, the textbook "garbage barge" spinoff.

What makes Consensus different than many other garbage barge spinoffs is while it is a declining business, the business itself has some attractive qualities to it.  It's reasonably sticky (as said earlier, you want to keep your subscription just in case), it is high margin (50+% EBITDA margins) and fairly asset-lite, despite the debt, they're projecting $100MM of free cash flow to the equity on $200MM in EBITDA.

A few quick thoughts on the investor presentation which you can find here. 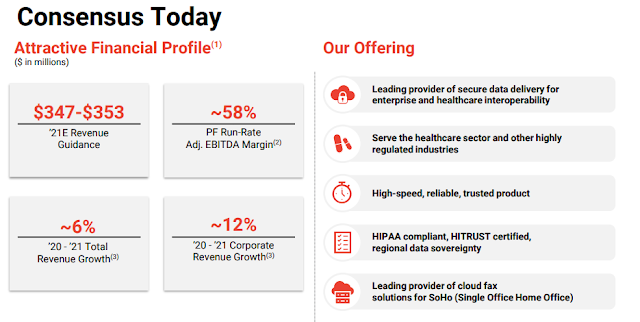 They're doing what most declining businesses are doing and split themselves up into two segments, one that is the slow-or-declining business (SoHo, which is their small and home office segment) and corporate which is where they're focusing on the healthcare vertical and is showing growth.  Now the big question that always been around JCOM, how much of the growth is organic versus M&A, many of the bear writeups in the past have made that argument.  And its hard to tell, they do a good job obscuring their financials, in the Form 10, the proforma financials only show the proforma numbers for 2021 and 2020 and everything prior is obscured by JCOM's segment reporting (only the eFax business is being spun, JCOM is retaining the rest of their cloud segment).

But if this is really a mid-single digits grower on an organic basis with 50+% EBITDA margins, CCSI would trade multiples of where this is likely to trade.  It seems reasonable that the revenue growth guidance includes M&A, but hard to tell how much, and thus hard to trust that FCF number, how much of it is really capex via M&A? 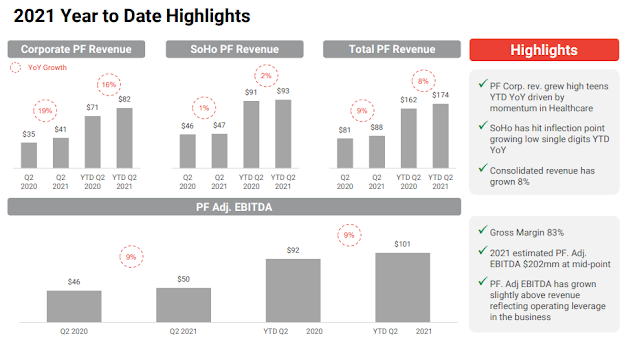 Again, showing growth even in the legacy segment, one question could be how much was this business a covid beneficiary?  I could see them gaining some marginal subscriptions from people moving from the office to home and instead of buying a fax machine, employers signed everyone up for eFax.  Maybe that's a permanent shift as with each passing day it seems like a full return to office is off the table.

They plan to de-lever, the proforma income statement seems to suggest the bonds will have a 6.5% coupon (second thought, this will probably have a term loan above the bonds, so the bonds will have a higher coupon which makes sense), maybe that could be interesting to some fixed income investors.  Could be a great short if management misses guidance early and the market questions the sustainability of their business, but could also work tremendously well if they can steady the business for a few years, de-lever and harvest the cash flows into something with a longer term growth profile.  But with the debt, they'll really need to thread the needle, I'll probably stay away and just watch as a spectator.  Curious if others have more complete thoughts.

Email ThisBlogThis!Share to TwitterShare to FacebookShare to Pinterest
Labels: Consensus