Similar to my last post on Loyalty Ventures (LYLT), this is a half baked idea, it hasn't started trading yet but it might help others if I put my thoughts on paper and help me if anyone else has spent some time on it and would be willing enough to share thoughts, especially if you have a different view.

I love a good merger-spinoff combo, the latest one is a result of the merger of two large net lease REITs, Realty Income (O) (which is the bluest of blue chip in net lease land) and VEREIT (VER), the merger closes 11/1, the two are combining their office properties and spinning them off as Orion Office REIT (ONL, presumably for "Office Net Lease") mid-November.  About 2/3rds of the portfolio is coming from VEREIT and 1/3rd from Realty Income, VEREIT has spent the last few years selling down their office exposure to look closer to Realty Income and other high quality peers, so there is some risk these are their lower quality office assets.  Office properties usually aren't a great fit for a net lease REIT, they're less mission critical to the operations of the tenant as a restaurant location would be or a casino or an auto body shop.  Caesars Entertainment is not going to leave Caesars Palace (net-lease owned by VICI), but they can change a corporate office building without impacting the business.  Add covid into the mix where people are generally living their lives as normal other than returning to the office and it makes sense that Realty Income would use this opportunity to spinoff their office exposure.  This could be viewed as a BadCo or garbage barge spin, here's the Form 10.

The Realty Income management team is going to stay in place, while much of the VEREIT team is moving to the spinoff.  Orion is positioning itself as a single-tenant, long-term leased (resemble a triple-net if not explicitly one), suburban office REIT with the thesis that in a post-covid world, suburban office is going to make a comeback as millennials move to the suburbs and white collar employees generally want shorter commutes.  Orion wants to be a growth vehicle, taking advantage of any covid induced dislocations and a lack of competition, targeting properties in fast growing sun-belt metro arears.

Anecdotally, my friends that pre-covid worked in the suburbs are back in the office at least part time, others that worked downtown are still fully virtual.  I think it will be difficult to get people, especially those with families, to return to the old normal routine of an hour plus on a commuter train when the labor market is this tight.  Try taking a dog treat away, the dog won't be happy, everyone has adjusted and proved many formerly cube farm jobs can be done in pajamas from the comforts of home.  But maybe suburban office makes a comeback, suburban office would generally feature shorter/more flexible commutes as employees drive-to the office versus take public transportation on set schedules.  Again anecdotally, in my typical office job, we're trying to get people back to the office, it's difficult to train new people in fully virtually environment and we're generally having trouble keeping the previous corporate culture together almost two years removed from the beginning of covid.  Many people have never met face to face (even with their manager), there's resulting infighting, clients hate us, etc.  I have an uninformed view that how big corporates handle their return to office/remote strategy might be more important for long term success than their go-to-market strategy with clients in the next 1-3 years.  Office space will likely have a place in the future, but clearly a smaller footprint, more communal layouts and possibly different locations than pre-covid.  Maybe Orion gets sold off on the perception that it is a garbage barge spin but is instead well timed at the inflection points of both a return to office theme and suburbs over central business districts themes?  I'm not fully there on that thesis, but I'm intrigued by the idea.

The biggest problem is while it might be Orion's go-forward strategy, the starting portfolio doesn't resemble a long-term leased sun-belt suburban office portfolio.  The weighted average lease life is less than 3.5 years and many of their 92 properties are large headquarter like campuses in the northeast and midwest.  For example, they will own the old Merrill Lynch Princeton, NJ campus now occupied by Bank of America and the Walgreen's corporate campus down the street from me in the northern suburbs of Chicago.  The headline portfolio metrics seem good, it's 94.4% occupied (I assume this means leased, would be interesting to see the percentage where the tenants have returned), 72% investment grade tenants and 99% rent collection through covid. 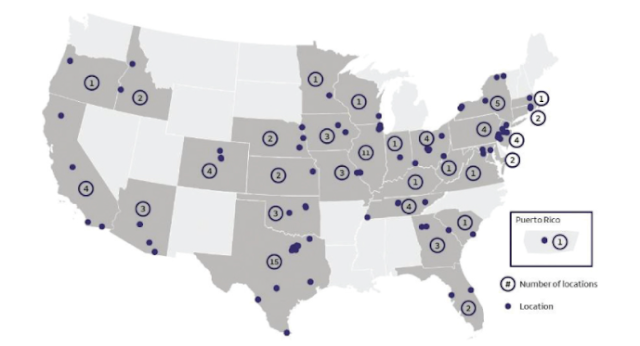 Below is the lease expiration schedule, many of their leases are expiring in the next 3.5 years, depending on your view of the pace of return-to-office, this could be a challenging time to re-lease these properties at or near the same levels of base rent or square footage.

I'm going to compare Orion to Office Properties Income Trust (OPI) which also focuses on long-term single tenant office buildings, it differs from Orion positively as its weighted average lease term is 6 years (plus has more central business districts properties) and on the negative side, it is externally managed by RMR Group (RMR) which comes with conflicts that deserves a discount and has less net leases leading to more capex and lower FFO to AFFO conversion.  OPI is one of the cheapest office REITs and might be a good bogey for where Orion will trade initially.
Part of OPI's strategy is to sell assets with upcoming lease expirations that are not net leased and thus require the owner to upkeep the property and pay for capital expenditures.  I found their recent commentary on the Q3 earnings call surprising:

And then just on the disposition side, can you just maybe comment on who are the buyers, what the market - like who sort of looking at these properties and any comments on pricing would also be helpful, whether it's cap rates or you're seeing increased interest would be helpful. Thanks.

Yes. So I think from who the buyers are, I mean these - given kind of the size of these assets, a lot of these properties are kind of more local, local, regional groups, not necessarily institutional investors. And so it really is a mix, just kind of given the fact that these properties, it's not necessarily a portfolio, but they're individual dispositions. And so I think from kind of looking at the financial aspect, I would say that from kind of a cap rate for these assets and at least what we've sold, we're seeing kind of collective cap rates in between 7% and 8% and that can kind of vary on one side or the other depending on the circumstances.

And I think it's just kind of important to note that these are buildings we're selling as part of our capital recycling strategy because they're buildings that we feel like where we would rather maximized value. These are buildings that are older in age, capital intensive and in some cases kind of have short-term fault and so by way of example from what we've sold to-date, as I noted, the weighted average lease term was 1.2 years.

Again, those are surprising cap rates for a property type that many, include me, believe to be potentially obsolete. If these properties are trading for a 7%-8% cap rate, ONL should probably trade somewhere in there, maybe closer to the 7% range since the governance structure will be better and these are true net lease properties.

FFO is a fairly standardized number, while it's not GAAP, most REITs follow the same industry methodolgy, adjusted AFFO can vary, it is supposed to further adjust FFO (which is primarily just net income + depreciation, then adjusted for acquisitions/dispositions) by removing recurring capital expenditures to maintain the properties, a closer true cashflow/earnings number.  In a net lease REIT, FFO and AFFO should be very similar since the tenant is responsible for maintaining the property.

That is what we see with ONL:

For the Realty Income office assets (FFO is proforma for the new capital structure, it does include the anticipate debt, overhead, etc.):

For the VEREIT office assets:

That might be a bit harsh, the broader net lease REIT group trades for a high-teens AFFO on average, but I don't think this will trade like the others.  Based on the Form 10, I come up with about $170MM in NOI for the ONL portfolio, they're going get spun with $616MM in debt, if we put a 7% cap rate on that it should trade for ~$33.50/share and at an 8% cap rate it should trade for ~$27.80/share (the range where OPI is selling assets).  I could have a few mistakes in here, so please do your own work, but if ONL trades well below this range I'd be interested.  In post-covid/pre-merger calls, VEREIT was looking to sell office assets in the 6-6.75% range, possibly I'm being conservative again like CCSI.

Disclosure: No position, but interested depending where ONL begins trading