Thanks to Writser for pointing me to this idea

Rubicon Technology (RBCN) ($36MM market cap) is primarily an NOL cash shell with a small $4MM revenue, roughly break-even, industrial sapphire business.  RBCN was previously trading below net current asset value until 7/5 when Janel Corporation (JANL) offered to tender for 45% of the shares at $20/share.  Following the tender, Rubicon will distribute a $11/share special dividend (approximately their excess cash) to all shareholders including Janel and also delist from the NASDAQ along with suspending their SEC reporting requirements ("go dark").  If everyone fully participates in the tender offer (which they should, but is unlikely, probably a few forgotten shares out there), RBCN shareholders will receive a total of $15.05 in cash per share (45% x $20 + 55% x $11) in the next couple months, plus a dark NOL stub.  The shares roughly trade for the $15.05 cash consideration number today.

To fully access the NOLs, Janel will then be incentivized to make another tender offer on that residual stub in three years (IRS required waiting period to preserve the NOL) to get their ownership level above 80% so they can consolidate the financial statements.  Janel spells out that potential second step in their schedule 13D:

The purpose of the offer is for Janel to acquire a significant ownership interest in Rubicon, together with representation on Rubicon’s Board, in an attempt to (i) rejuvenate, reposition and restructure Rubicon’s business and brand by focusing on its profitable business line and implementing a lower cost structure to achieve profitability and (ii) allow Janel to be in a position to potentially more easily acquire such number of additional Shares of Rubicon three or more years thereafter that would, after which, should such transaction occur, permit Janel to consolidate the financial statements of Rubicon’s with its own, thereby allowing Janel to benefit from Rubicon’s significant net operating loss (“NOL”) carry-forward assets. Under federal tax laws, Janel would then be able to carry forward and use these NOLs to reduce its future U.S. taxable income and tax liabilities until such NOLs expire in accordance with the Internal Revenue Code of 1986, as amended.

Since the company isn't cash flow positive, they currently have a full valuation allowance against the ~$65MM in tax assets: 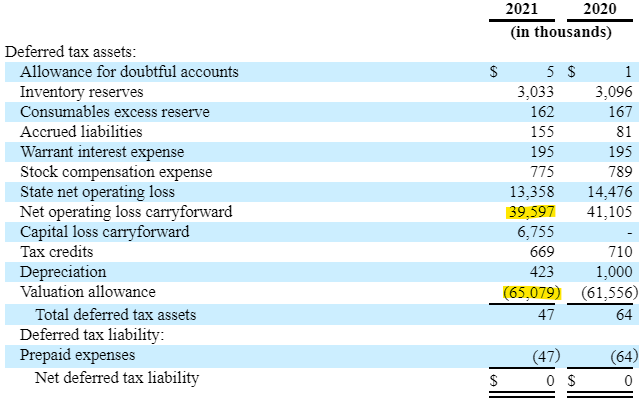 While the total tax asset is $65MM, about $39.5MM is federal which is likely more valuable and easily transferrable than the $13.3MM in state taxes (IL and IN), I'm guessing Janel could also take full advantage of the $6.75MM of capital loss carryforwards too.  Let's remove the state tax assets and call it $46.25 in value or $19/share (plus whatever you value the remaining business for) that Janel is paying $9/share ($20 minus the $11 special dividend).  You've got some time value of money in there since they'll need to wait 3 years for the next tender, and during that time some of the NOL will expire (it started expiring in 2021, but I don't know the amortization schedule of the NOL).  Sounds like potentially a great deal for both sides given RBCN traded for $9.00-$9.25 prior to the announcement.

I don't know much about Janel Corp, it is a $37MM market cap company traded OTC that is 42% owned by Oaxaca Group.  It appears to be a holding company of smallish operations in logistics, manufacturing and some health care.  We are taking some counterparty risk here in both the deal being completed successfully and Janel ultimately being able and willing to buyout the remaining stub in 3+ years.  They have committed financing already from the expansion of their established credit line with Santander (don't need to go to the syndicated or private debt markets like FRG/KSS for example).  Santander is also providing them with a bridge loan while they wait for the special dividend to get paid out.  The other minimum condition is 35% of holders tendering, four major shareholders including names people reading this blog would recognize own 27% of the shares have already agreed to tender, so that should be no problem either.

I go back and forth in my head on what value to ascribe to the stub position.  Post tender it will still have the same $19/share (or approximately that, again not sure how much will expire) in tax assets, Janel will be situated as the only bidder but also they'll have a sunk cost of purchasing 45% of it, we might be under a different corporate tax regime, it will be immediately useable so no discount for the time value or risk from their perspective that they won't get access to the NOL.  I don't see why the base case shouldn't be $9 again, but I could be too optimistic in that view, the good thing here is it doesn't matter much as it's a free roll once the deal closes.

Disclosure: I own shares of RBCN