I've been having trouble lately finding new cheap investment ideas without a lot of hair on them.  So I've spent some time re-reading classic investment books and seeing what I can glean from a 2nd or 3rd reading.  A common investment theme of Peter Lynch, David Einhorn, and Seth Klarman has been investing in mutual bank conversions, something I've looked at in the past, but generally passed on for no particular reason.  But at this point in the business cycle, I'm attracted to the built in value and clean balance sheets of mutual banks that convert to stock corporations.  This isn't a new strategy, but I think for the individual investor, its an easy formula to follow for above average returns with relatively low risk.

Why Mutual Conversions?
Mutual banks are those that are "owned" by their depositors and have no shareholders, they're designed to be low risk institutions that cater to their members by taking deposits and making loans in the community.  They tend to be conservative in their lending and accounting as there is no stock or ownership group to please, and reporting profits could be a sign of risky lending.

When a mutual bank determines it wants to convert to a stock corporation, the depositors have to come up with cash in order to buy shares in a company they already "own".  Unlike a typical IPO, there's no exiting investor group selling their shares to an unsuspecting public, its the bank's directors and the IPO buyers on the same side of the table.

By construction, the post-IPO thrift conversion is undervalued.  By adding the new IPO share proceeds to the existing equity capital held by the bank, the new investors effectively get the company for free as ownership of the post-IPO bank includes both the offering proceeds (minus expenses) and the exisiting capital itself.  What you end up with is a low-risk balance sheet with excess capital available to increasing assets at a significant discount to tangible book value.  In many cases, mediocre banks begin to show profit improvements after the IPO as the animal spirits of the thrift's management takes over.  Newly converted mutual banks tend to outperform due to these reasons, however they are restricted from repurchasing their stock for 1 year post IPO and from being acquired for 3 years post IPO.  After this three year lock up period, many converted thrifts are purchased at premiums to their tangible book value.

Sunnyside Bancorp
On July 15th, Sunnyside Bancorp (OTC: SNNY) completed their mutual conversion IPO by selling 793,500 shares (adjusted maximum) for $10 a piece.  Sunnyside Bancorp is the holding company for Sunnyside Federal Savings and Loan Association of Irvington, a one branch thrift located in Irvington, NY, a bedroom community about 25 miles north of New York City in Westchester County.  Irvington is a small affluent village on the Hudson River.  It's been named as the "Best Place to Live in Westchester" which is the second wealthiest county in New York, with a median household income of $80,725 and a median home value of $547,000.

Balance Sheet & ROE Potential
Besides being located in an attractive community, Sunnyside's balance sheet shows a conservatively run thrift that's ripe for additional capital to improve profitability.  Sunnyside is primarily funded through customer deposits and has no senior debt.  A vast majority of their loans, 86.4%, are owner occupied residential mortgages which ranked high on Peter Lynch's criteria when investing in small thrift banks.  The view on the safety of residential mortgages has probably changed drastically from the early 1990s (when Peter Lynch was investing in mutual conversions), but Sunnydale's portfolio is rather clean, they have no subprime or Alt-A loans and borrowers almost always need a 20% downpayment.  Historically, Sunnydale hasn't written their mortgages to "conforming" standards since they've held all their mortgages on balance sheet, but going forward they will be putting more emphasis on selling mortgages to the GSEs in order to increase non-interest income, a general theme of their strategy going forward to increase profitability.

Although the balance sheet is clean, Sunnyside posted a net loss in 2012, but with the excess capital, what could Sunnyside's income statement look like post-IPO?  Below I attempted to make a pro-forma income statement using Sunnyside's current net interest margin (which hopefully will increase as Sunnyside makes slightly riskier loans), increasing the thrifts non-interest income to represent the new strategy to sell loans to the GSEs and then increasing expenses as appropriate for the increased size and newly public status. 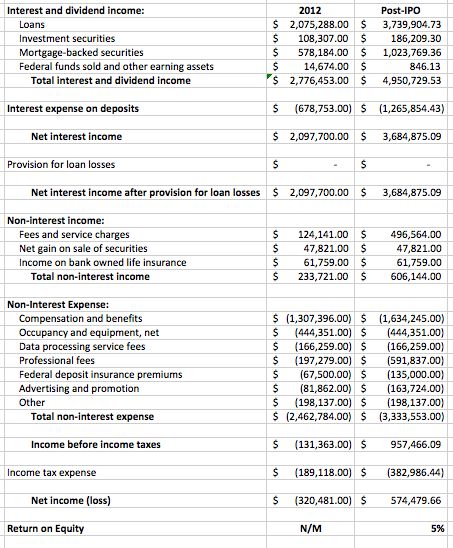 While a 5% ROE is still too low, it should be a fairly conservative proforma estimate.  I would expect Sunnyside to improve on these results as it engages in slightly riskier lending and the stock ownership/options of management increases their incentives to generate a profit where that wasn't a key motivation as a mutual bank.

And despite a potentially low ROE, Sunnyside's value should still be close to tangible book value as an acquirer (after the 3 period is up) can come in and buy the company, strip out the costs, and utilize any excess capital to their advantage, the equity capital is worth more than the bank as an ongoing entity.

SBA Lending
Slight tangent: In December 2012, Sunnyside was approved as an SBA lender and plans to hire an SBA loan officer here shortly.  SBA 7(a) loans are typically for small businesses that cannot get credit at reasonable terms elsewhere, so these are risky loans made to less than credit worthy borrowers.  To encourage small business lending, the SBA will guarantee up to 85% of the loan balance if the loan meets certain criteria which can often lead to a lengthy paper intensive underwriting process.

Sunnyside currently has little in non-interest income, so the move into SBA lending will likely be a nice source of additional profits for the small thrift.

Management Experience and Incentives
In 2008, Sunnyside brought in Timothy Sullivan as President and CEO, his previous experience is mostly as a commercial lending guy which explains the gradual move toward commercial lending that Sunnyside plans to make.  Being such a small thrift, it's hard to get much information on Mr. Sullivan, but given Sunnyside's lack of delinquent loans and relatively strong balance sheet, it would appear that he's taking a moderate approach to the move into riskier commercial lending.  Directors and senior officers are buying $440,000 of the offering, not a small amount for a bank with only 15 full time employees.  Additionally, there will be an ESOP which will dilute shares, but is a net benefit as it will align their incentives with the outside shareholders and in this case, the performance of each employee can really make a difference.

Risks
Sunnyside is a very small bank and pre-IPO it wasn't particularly overcapitalized like many pre-conversion thrifts.  Post conversion, they're going to need to increase their asset base by 75-100% to generate an acceptable ROE, given tepid loan demand and fierce competition for good loans, Sunnyside might not be able to lend that money out at favorable risk adjusted rates.

Strategy Going Forward
My plan going forward is to dedicate a portion of my portfolio to purchasing new mutual conversions soon after the IPO date if I can buy the newly converted thrift for less than 2/3rds of tangible book value.  I will then look to sell once the thrift reaches tangible book value and recycle that cash back into new mutual conversions.  I'll leave myself a little room to change course if the 3 year acquisition period is around the corner, but my general goal is to be methodical with this strategy long term.

Disclosure: I own shares of SNNY
Posted by MDC at 10:02 PM