Ashford Inc (AINC) is the asset management spinoff of Ashford Hospitality Trust (AHT) that a reader recently alerted me to, so I did some digging and while I don't think it's particularly appealing at current levels, it could provide some insight into similar upcoming spins/breakups at American Capital Ltd (ACAS) and Prospect Capital (PSEC), both BDCs, which are also spinning off their asset management businesses.  Most corporate governance groups and investors would prefer to see REIT/BDCs internalize management, but now there is this new trend to externalize management with asset management spinoffs, not something that happens at market bottoms.  External asset managers have a number of potential conflicts with the entities they manage, what's good for AINC shareholders (AUM growth) may not be best for AHT shareholders if they end up over paying for growth or issuing shares/debt at less than ideal levels.

In November 2013, AHT spun-off its luxury hotels into a separate entity Ashford Hospitality Prime (AHP) in an effort to obtain a premium valuation and a lower cost of capital.  As part of the AHP spinoff, AHP entered into an external management agreement with a subsidiary of AHT which laid the groundwork for the AINC asset management spinoff.  Ashford Inc (AINC) was then spun-off on 11/12/14 with an odd 1 share of AINC for every 87 shares of AHT ratio, it started trading in the mid-$40 and quickly traded all the way up to over $130 (quick triple for some) a share with CEO Monty Bennett buying in the open market along the way.  It's now trading around $93.

Ashford Inc currently manages the Ashford complex's two REITs (AHT & AHP) on 20 year contracts and is in the process of setting up a real estate focused hedge fund under the Ashford Investment Management banner which will be 40% owned by Monty Bennett and one of his lieutenants.  They're also interested in a few future growth platforms as shown below: 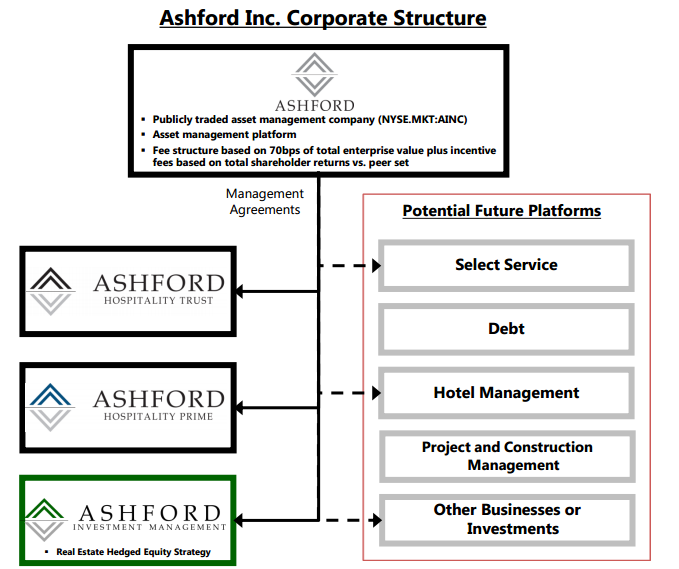 Asset management companies are of course great businesses, they have substantial operating leverage with minimal capital expenditures, a small increase in AUM can disproportionately increase earnings in a hurry.  What makes Ashford more attractive than other small cap asset managers is their capital is essentially permanent, while their market caps can certainly decrease, Ashford's REITs won't be subject to outflows like a traditional mutual fund manager in a market decline.

The spinoff wasn't without some controversy, labor union UNITE HERE staged some opposition to the transaction by creating a website (http://www.unlock-ashford.org/) outlining some of the real or perceived conflicts of interest created by the structure.  Ashford also instituted a poison pill that expires in March and has a staggered board, both anti-shareholder friendly, which was picked up by the Wall Street Journal on Monday.

Ashford Hospitality Trust (AHT) & Ashford Hospitality Prime (AHP)
Ashford Inc is really a leveraged bet on the growth (and to an extent the performance) of both AHT and AHP as Ashford will be paid a 70bp base fee on the total enterprise value (but including cash) and an incentive fee based on the relative stock performance versus a peer group for both entities (determined annually but paid over three years), so it makes sense to analyze each briefly.

AHT considers itself an opportunistic hotel investor, having a wide mandate to invest across sector subclasses and across the capital structure.  It also utilizes significantly more leverage (both debt and preferred stock) than the average REIT, and is quick to refinance non-recourse mortgages to raise cash as it did recently.  Management likes to tout their 19% insider ownership at AHT as a method of aligning shareholder interests, and there seems to be some truth to that as AHT was savvy during the financial crisis and was able to repurchase a substantial amount of their float at advantageous valuations.  Including cash, the enterprise value of AHT is around $4.2B.

AHP on the other hand is marketed as the lower risk, higher quality portfolio compared to AHT.  At the time of the AHP spinoff they articulated a clear strategy of targeting hotels with RevPar (revenue per available room) of at least two times the national average and located in major gateway and resort market.  AHP will also have a  lower debt profile than AHT, with a target of 5x EBITDA by the end of 2015 and going forward.   Ashford also recently announced a share repurchase plan at AHP, again something you wouldn't expect if you're extremely cynical about external management.  They plan to sell one of their hotels and buy back shares, essentially reversing the private/public arbitrage that REITs generally exploit.  Including cash, the enterprise value of AHP is around $1.4B.

I didn't spend too much time on the above table (so don't trust every number), but compared to peers, both look slightly undervalued on a relative basis and not particularly expensive on an absolute basis.  However, Hotel REITs are a risky bunch that should trade at a discount to other REITs, their leases are the opposite of the triple-net lease industry in that their "leases" are extremely short term (overnight) in nature, meaning in a recession earnings can evaporate pretty quickly.

Valuation
The pro-forma financials in Ashford Inc's propectus are pretty messy and I'm not sure they really tell us a whole lot about what the future operating performance will be.  For instance, proforma 2013 numbers indicate an operating margin of just over 10%, extremely low for an asset manager, should be more in the 30-40% range and I would expect the company to right size costs as a standalone entity.  Let's approach valuation another way, a common valuation metric for asset management companies that I've seen is 10x pre-tax earnings, not entirely sure of the origin, but it seems reasonable to me.  Using that as a yard stick, I backed into what the market is currently pricing in as their pro-forma operating margin and an implied AUM figure below:

So it appears that the market is a little ahead of itself or expecting a lot from Ashford's hedge fund effort and their incentive fees.  While I'm passing on AINC for the time being, it's been an interesting exercise and as a result I'm going to be taking a closer look at both the ACAS (the management company will keep the NOLs) and PSEC asset management spins coming in 2015.  Are there any others to keep an eye on?

Disclosure: No Position
Posted by MDC at 3:51 PM