I have made a few mistakes this year in spinoffs, particularly energy related ones like Civeo and Paragon Offshore (washed out/sold out of both) that looked cheap using past earnings but their futures have been brought in question with the quick drop in oil prices.  An upcoming non-energy spinoff, but also one with a potential cyclical earnings top is Vista Outdoor, the ammunition and hunting accessories business of Alliant Techsystems.  So before following me into another spinoff consider that risk up front.

Alliant Techsystems (ATK) has three main lines of business: aerospace, defense, and sporting goods.  In February 2015, the sporting goods business ("sporting goods" might be a stretch, really ammunition, guns, and hunting accessories with grander plans to diversify) which makes up 39% of ATK's revenue will be spunoff as Vista Outdoor (VSTO) to ATK shareholders, and the remaining aerospace and defense businesses will be merged via a Morris Trust transaction with fellow aerospace and defense contractor Orbital Sciences (ORB) immediately after to form Orbital ATK (OA).

Quite a few moving parts, but let's focus on Vista Outdoor.  Starting in 2001, ATK entered the sporting business with the acquisition of Blount International's ammunition group, and recently added BLACKHAWK! in 2010, and firearm manufacturer Caliber and accessories maker Bushnell in 2013.  All rolled up, Vista Outdoor will be the number one provider of ammunition for various markets, and then also sell hunting accessories, rifles, gun cleaning products, targets, tactical accessories, goggles/glasses, and range finders.  Below is a slide from their investor presentation to give you an idea for their product offering: 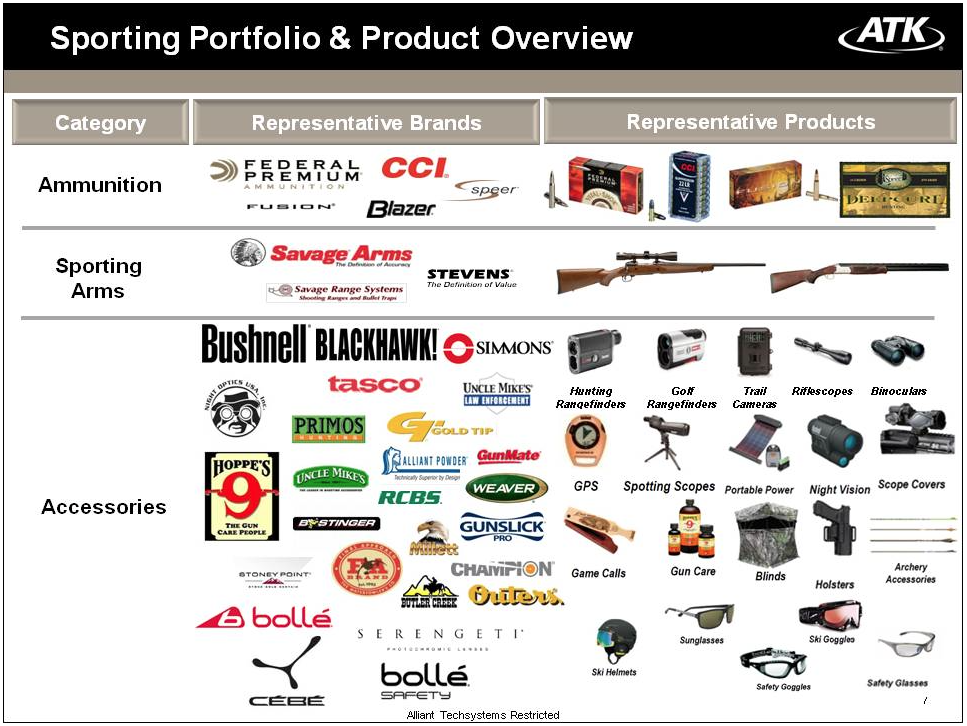 The sporting business has seen 15% annual growth for a decade, spurred on even more recently with the "surge" in gun demand due to the real or perceived threat of tighter gun controls under the Obama administration.  Only about 10% of their revenues are firearms, so think of Vista Outdoor as more the razor blades piece in the razor/razor blade analogy business model.  With the rise in number of guns purchased in recent years, the number of potential customers for Vista to sell ammunition and accessories into has also increased (also good demographics, young males, more females coming into the sector, etc).

Transaction Details
On April 28, 2014, ATK and Orbital Sciences entered into a deal in which ATK would spinoff Vista Outdoor first, and then merge with Orbital Sciences to form Orbital ATK, original ATK shareholders will own 53.8% of the new company, with Orbital Science's shareholders receiving the other 46.2%.  The deal was originally scheduled to close this year, but has been pushed back to February 2015 pending shareholder approval on 1/27 due to a rocket launch failure at Orbital (more on that in a bit).

What really makes this transaction work is both entities should be better off afterwards, I don't see a dump transaction taking place here.  Orbital trades at a significant premium to ATK, so this deal should be accretive to Orbital shareholders.  Institutional and long term investors in ATK should also end up sticking with the new Orbital ATK, ATK has been a defense and aerospace contractor first and foremost for its history, and the new company will remain in the same industry/market cap indexes.  The typical spinoff forced selling dynamics don't appear to be at play here.  There should also be a number of operational and financial synergies in the new Orbital ATK, the two appear to have a lot of complimentary business lines, natural fit between the two companies that should result in both cost efficiencies and revenue synergies.

ATK's CEO Mark DeYoung will be coming over to Vista Outdoor, he's been with ATK since 1985, well before they entered the sporting business space.  He lead the push towards sporting and his move to the spinoff is a further sign that Vista is really the crown jewel asset and not a dump transaction.  I believe it should end up with a premium market multiple as a niche consumer staple company over the old ATK which as a defense contractor has seen its margins and multiple contract in recent years.  Vista will also have limited debt, just $350MM in net debt, or about 1x EBITDA giving it flexibility to make additional acquisitions to diversify away from guns and ammo.  ATK acquired Bushnell in 2013 for $935 million in debt (10x EBITDA purchase price), interestingly most of the debt associated with the deal is going to end up on Orbital ATK's balance sheet making the spinoff even more attractive.

Antares Launch Failure
On October 28th, Orbital Sciences had an Antares rocket explode spectacularly on live TV 14 seconds after launching from NASA's Wallops Flight Facility in Virginia.  The rocket is contracted to provide periodic supplying trips to the International Space Station for NASA, although a significant reputational loss, insurance proceeds are supposed to minimize the financial impact of the launch failure.  Both Orbital and ATK's shares took a 10-15% hit in the aftermath of the failure as there was concerns the deal would fall through, but both sides have agreed to continue, yet the shares have only partially recovered providing an opportunity to buy Vista Outdoor synthetically even cheaper since the rocket business has no relationship with the sporting business.

Valuation
In the first six months of ATK's fiscal year (starting 4/1/14), the sporting business has done $1.1B in sales, annualizing that figure gets you to $2.2B for the year which is slightly below management forecasts of $2.3B at the time of the spin announcement.  Using a 13% EBIT margin and $73MM in annual depreciation, I come up with roughly $360MM in EBITDA.  After interest expense and a 35% tax rate, Vista should have about $5.50 per share in projected earnings.  What is the market currently valuing Vista at?

Below is a quick comparables table I built using other mid-to-large capitalization defense and aerospace contractors.  If we assume the new stronger Orbital ATK trades at a peer average of 8.5x EBITDA and a market multiple of 15 (and roughly between where ATK and Orbital trade separately), my math shows the current share prices of Orbital and ATK essentially reflecting those valuations. 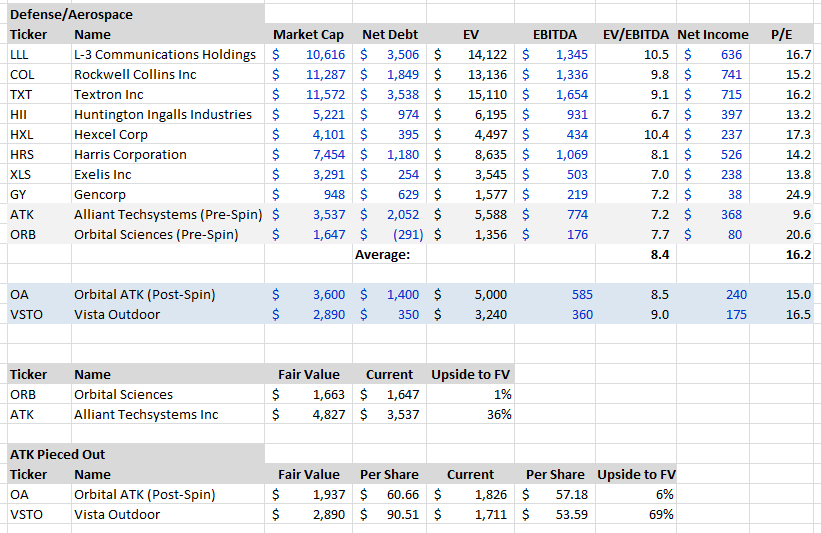 By piecing out ATK, and backing out the Ortibal ATK position, the market is currently valuing VSTO at $53.59 per share, just under a 10 P/E or 5.7x EV/EBITDA.  That's pretty cheap for a company with a double digit long term growth rate, but that comes back to the question of peak earnings?  Management thinks the slowdown in the gun market should reverse itself in the back half of 2015, there's a decent amount of data to back that up (Black Friday had record gun sales), but just from a big picture viewpoint I can't see America's love affair with guns fading anytime soon?  But I could be wrong.

I struggled a bit on how to put this position together, the ATK options look a little expensive to my untrained eye, and by my math Vista Outdoor is really the undervalued entity, one can go long 1 share of ATK and short 2.23 shares of ORB to synthetically create a long position in VSTO ahead of the transaction.  So that's what I did today, the short ORB will cancel out the shares in OA I receive and will leave me with just the VSTO shares if/when the transaction is completed in February.  Within a few months, I would expect VSTO to be trading much higher than the mid-$50s.

Hat tip to a reader who brought me this idea.