Colony Capital (CLNY) is a real estate private equity manager and real estate investment company that today fashions itself as a leader in the digital infrastructure sector.  However, it's mostly a complex mess of assets that have been left behind as the company has pivoted strategic directions several times, only to reclassify the old businesses as "legacy" hoping investors forget about them.  But the complexity and random assortment of assets might be beneficial to company today as its not reliant on one asset type (i.e., agency mortgages) or one funding source (i.e., repo agreements) that could subject the company to repeated margin calls and put them out of business completely.  The common stock might be worthwhile as a call option, but due to that complexity, I have a hard time valuing it in any credible way I'm willing to share, instead, the preferred stock seems cheap based on the unencumbered assets and is unlikely to be impaired through this crisis.

CLNY is the creation of Tom Barrack, he's a long time real estate investor and close friend of Donald Trump who is known for speaking at the 2016 Republican National Convention and more recently writing a blog post asking for a bailout of the commercial mortgage market.  Commercial mortgage REITs have recovered quite a bit in the last week or so, but prior to that they were hit with margin calls as the value of their CMBS assets fell and started a chain reaction of forced selling creating more forced selling as prices dropped.  CLNY is not a mortgage REIT, but is the external manager for one in Colony Credit Real Estate (CLNC) and CLNY owns 36% of CLNC's equity, but CLNY and its preferred stock declined alongside the commercial mREITs anyway.

CLNY's current strategy is to "focus on building the leading digital real estate provider and funding source for the occupancy, infrastructure, equity and credit needs of the world's mobile communications and data-driven companies."  They started down this path last July by purchasing Digital Bridge Holdings, a private equity firm that managed six separately capitalized digit real estate companies and a $4B fund it co-raised with CLNY, Digital Colony Partners Fund (which recently acquired ZAYO).  Along with Digital Bridge came a new management team that is slated to take over CLNY on 7/1 and move Tom Barrack to Executive Chairman.  This might be the right strategy, the tower and data storage REITs all trade at rich valuations, if CLNY can fully pivot maybe they'll get some of the benefit of that premium, but most of the value here is in the legacy assets.

Let's start with CLNY's capital structure as of 12/31/19:
CLNY has a fair amount of liquidity following the sale of their light industrial warehouse assets to Blackstone in December and the sale of their equity interest in RXR Realty in February, leaving them with $520MM in cash as of the end of February, plus their undrawn credit facility.  All but $931MM of debt is non-recourse, and then a portion of the non-recourse debt is third party that CLNY consolidates on their balance sheet.

Their main assets are majority interests in two large portfolios (essentially REITs in their own right), one in an assortment of healthcare assets (but mostly senior housing and skilled nursing) and the other in select-service and extended stay hotels with brands associated with either Hilton or Marriott.  Both asset sleeves refinanced their debt in 2019 and pushed out maturities to 2024 and 2026, I haven't spent much time on the covenants, but the debt is non-recourse and under a worst case scenario, CLNY could mail back the keys to the lenders.  In hospitality, I do tend to think extended stay is performing better than other segments (still long some STAY) as its more of a residential replacement than true travel and then select service might recover sooner than destination resorts or convention heavy locations.  But again, non-recourse, a blow up in either or both would be a scary headline but wouldn't take down the entire enterprise, for the below, just going to assume both portfolios are zeroes.

The remaining assets are an interesting grab bag, cynically, it seems like CLNY was used as a way for Tom Barrack to invest with friends or in vanity projects whether it made sense for a public REIT or not:

1) Investment Management Business
When CLNY (originally CLNS) was formed in the three way merger with NSAM and NRF, I figured CLNY wanted to be the next Brookfield Asset Management (BAM), they would mostly be an asset management company and then would have "YieldCos" they would manage and partially own.  They've sort of done that, just not executed as well.  But with the acquisition of the digital business, they have a considerable management company arm that is essentially unencumbered and generates approximately $160MM a year in base fee revenue. 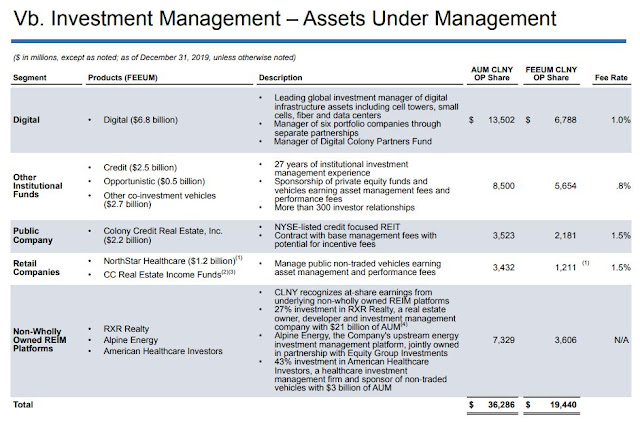 They have started down the path of internalizing the management at CLNC which they'll likely receive additional shares as consideration once the commercial mortgage market settles down a bit.  If you put a 35% margin on $160MM and give it a 10x multiple (just a swag), that's a $560MM business plus the non-wholly owned management companies listed above.  One of which is an interesting venture with Sam Zell (partnering with friends, not sure it fits in a public REIT vehicle), Alpine Energy, that is investing in distressed oil and gas like California Resources (CRC).  As mentioned earlier, they also monetized their investment in RXR Realty for $179MM, which implies a similar valuation I'm placing on the four wholly owned segments.

2) Colony Credit Real Estate (CLNC)
CLNC is mostly a commercial mortgage REIT but does own some net lease properties and other assets, it's suffered like the rest of the sector, but has generally limited CMBS exposure at under 7% of assets, recently closed a CRE CLO which termed out much of its debt, and has been current thus far on any margin calls.  Interestingly, I've only seen margin calls on RMBS or CMBS and not whole loans, whole loans are likely harder to price or more negotiable, might be worth focusing on mREITs with more whole loan exposure than to securitized products. 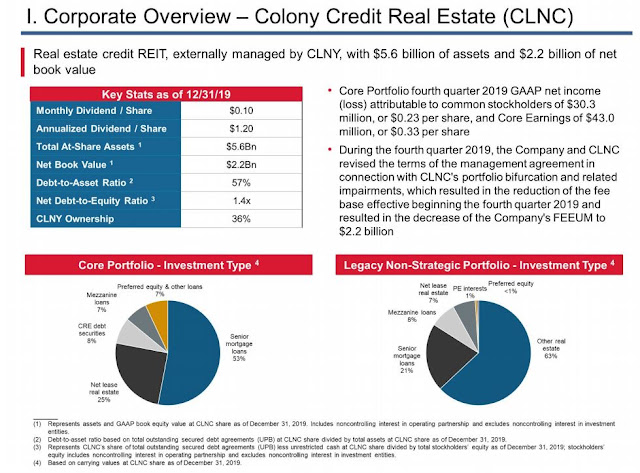 At Thursday's ~$5 close, CLNC has a market cap of approximately $665MM, trading at about 30% of the last reported book value (likely coming down).  But a 36% ownership at today's depressed prices is still worth $240MM to CLNY, plus the management fee contract but we're including that in the investment management business above.  They do account for their stake in CLNC via the equity method, so its grossly overstated at the moment compared to CLNC's market value, meaning an accounting impairment is likely on the way.  CLNY's long term plan with CLNC is to sell their position down over time once it is trading more inline with book value.  CLNC is interesting in its own right and might deserve a separate post, but for the purposes of CLNY let's say it survives and leave it here.

2) Other equity and debt portfolio
Here's the grab bag of other assets that includes some directly held real estate (sometimes the result of a foreclosure), their $186MM investment in DataBank which is one of the six companies that Digital Bridge manages, a stake in Albertson's which might be one of the few large companies to conduct an IPO this year (can't think of a better year for a grocery store to come public again), and all their co-investments in institutional funds they manage. 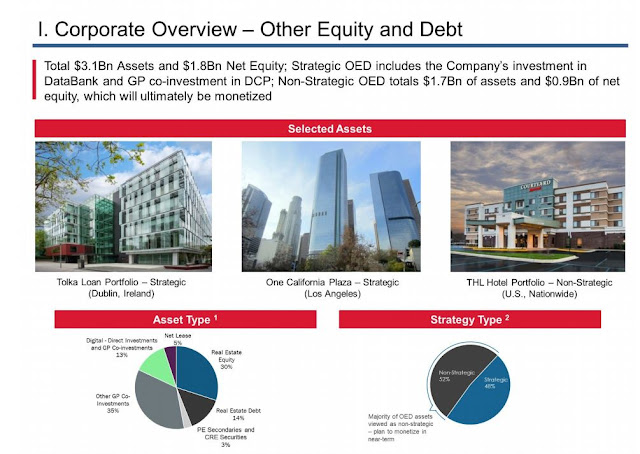 This sleeve is valued at $1.8B on the balance sheet and CLNY pre-corona intended to monetize $300-$500MM of assets this year.  That'll likely change, but even putting a significant haircut on the assets, let's say they're worth 30% less in this environment, making the net equity worth ~$900MM, that's probably overly punitive as a lot of this is at cost in their financials, but the exercise is to see how much value is left for the preferred assuming an extended crisis.

This modified SOTP is too severe, but just illustrating that I think the preferred stock is still money-good versus a trading price in the $16-17 range. 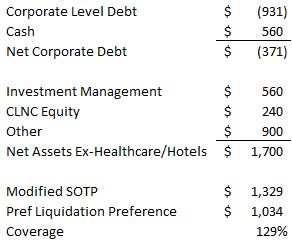 At Thursday's close, you also have about $1.2B in CLNY market cap beneath the preferred shares.  There are plenty of investment opportunities with more juice but here you don't have to worry about how much of the portfolio has been liquidated due to repo margin calls.  The preferred stock (there are 4 series, generally the same, some more liquid than others) has about 50% upside to $25 plus any dividends collected along the way as we wait for things to normalize.

Disclosure: I own shares of CLNY Preferred Series G
Posted by MDC at 3:27 PM