Many readers will know this situation, Altisource Asset Management (AAMC) is a cash shell with approximately $80MM in the bank after their only asset management client, Front Yard Residential (RESI), terminated their external management agreement with AAMC resulting in RESI being internalized (AAMC was a 2012 spin, was trendy at the time to spin the management company).  Front Yard later sold itself to private equity (Ares and Pretium) which likely will turn out to be a great deal (even after they hiked the offer) for the buyers given how single family rentals have traded since.  Friend of the blog, Andrew Walker did an excellent podcast (and even answered one of my questions on it) with Thomas Braziel and Jeff Moore pitching AAMC.  They go into some of the background, particularly on the controversial Bill Erbey, who was formerly an executive (back in the early-to-mid 2010s, Erbey ran Ocwen and a few satellite entities like AAMC), but now is *just* a 39% shareholder in AAMC after legal trouble forced him out of the day-to-day operations.

Long story short, Altisource has a large preferred overhang (originally $250MM, currently $150MM after two exchanges), the stock previously traded north of $1000/share (now for $17.90) and issued a zero coupon convertible preferred stock with a strike price of $1250.  The cash from the convertible preferred was used to buyback shares, presumably to boost the shares above the strike price making everyone happy, but instead the stock collapsed.  Now that piece of paper is hopelessly out of the money, it is basically a zero coupon bond with a mandatory redemption date of 3/15/44.  However starting in March 2020, every five years the preferred holders can request a full redemption:

The larger holders did indeed request redemption last year.  But the trick is AAMC has to redeem the entire class at once, and obviously they can't redeem the $150MM outstanding with only $80MM in net cash.  The preferred stock is closely held, two holders (Putnam and Wellington) have settled with AAMC and exchanged for either a combination of cash and stock in the case of Putnam or just cash in the case of Wellington.  Both worked out to approximately 11-12 cents on the dollar.   The remaining significant holdout is Luxor Capital which is pursuing litigation against AAMC.

I have never subscribed to the "preferred stock has no teeth" thesis, here is where my views differ (again, I'm often totally wrong):

But the price has fallen considerably in the last several weeks to $17.90 today, at this price the thesis seems more interesting (basically back to where it was before Wellington settled) and allows some margin of safety in the circumstance that Luxor strikes a significantly better deal than either Putnam or Wellington did.

Here's the current situation, obviously the capital structure is upside down at full face for the preferred, I'm discounting the net cash for two quarters of cash burn, dealers choice there.

How I'm thinking about a post-settlement proforma: I'm assuming that the Putnam settlement is the best case.  Putnam held $81.8MM of the preferred stock and received 288,283 shares of stock and $2.863MM in cash (split in two payments), if we applied that ratio to the remaining $150MM outstanding, I get about a $25 NAV. 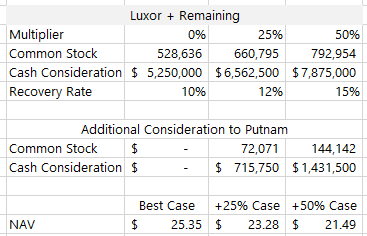 But if Luxor was going to settle for the Putnam deal, they would have already, so applying a multiple to that, let's say they negotiate a 25% or 50% better deal than Putnam, I get an NAV of $23.28 and $21.50 respectively.  Against a $17.90 stock, that seems like a reasonable discount, if you did a goal seek on the multiplier to get to the current price, Luxor would need to strike a deal more than 100% better than Putnam (also includes the incremental benefit to Putnam for MFN clause) to get to the current share price.
I'm not going to speculate on a deal target, the podcast interview I referenced does a bit of that if you're interested, but AAMC included in the below in their Q3 earnings release:

Mr. Thomas K. McCarthy, Interim Chief Executive Officer, stated, “The Company’s attention and focus continues to be the evaluation and pursuit of certain business opportunities and acquisition targets in which to focus the Company’s resources and enhance shareholder value. The Company has liquidated its equity holdings and is now in an all-cash position in preparation of an acquisition event.
During the third quarter, the Company also engaged the services of both an investment bank, Cowen and Company, LLC, and the law firm, Norton Rose Fulbright, LLP, to assist us in identifying and reviewing potential acquisition and merger opportunities. While no final decision has been made, the Company is in discussions with several potential acquisition or merger targets including cryptocurrency and brokerage related businesses”.

The company is probably mid-process, I'm guessing that a settlement with Luxor is announced at the same time (if they take shares, they could participate in the upside, removing the litigation overhang will likely cause the stock to bounce significantly), plus there are some "meme able" buzzwords in there and a relatively low float, I agree that something crazy could happen with this one and at today's price you're not paying much, if anything, for that optionality.  But there are hundreds of SPACs also competing for similar buzzy deals, so who knows, could be challenging to get a deal done and there could be a frustratingly long stretch with no news.

Disclosure: I own shares of AAMC