Sonida Senior Living (SNDA, fka Capital Senior Living under the old symbol CSU) recently completed an out of court restructuring led by Conversant Capital, the same investor that has been instrumental in institutionalizing and providing growth capital to INDUS Realty Trust (INDT).  While clearly different, the industrial/logistics asset class has covid tailwinds versus senior housing having covid headwinds, the results could rhyme with each other longer term as this micro cap "grows up" (to steal a tweet from "Sterling Capital" @jay_21_, also h/t for the idea). Sonida is now positioned to use their reset balance sheet to take advantage of a fragmented senior housing market with plenty of distress (looking over at our friend RHE), but also with long anticipated demographic tailwinds finally being realized with an increasingly large population aging into senior housing.

Below is the standard investor relations overview slide.  Unlike some others in senior housing, SNDA is not a REIT (more similar to BKD), but owns and operates the vast majority of their facilities as they exited locations the company formerly leased from others (VTR, WELL, PEAK etc) in recent years.  There's embedded real estate value at SNDA as a result, which may someday lend itself to some kind of REIT transaction.  They also have a small management business that resembles Five Star's (FVE) business model (got there in a similar way too when SNDA restructured their leased properties) that helps offsets some G&A in the meantime. 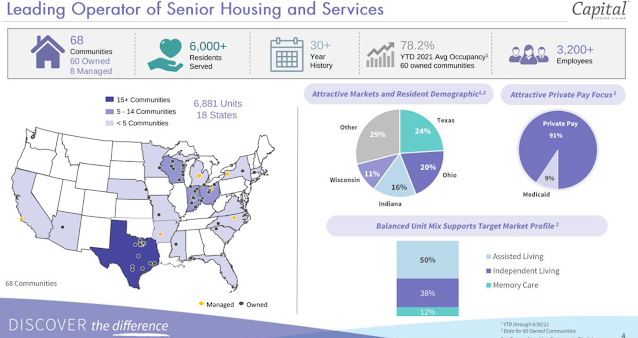 The restructuring agreement took a few twists and turns, including heavy opposition from 12+% shareholder Ortelius Advisors, but was eventually approved by shareholders in October and closed earlier in November.
A total of $154.8MM (net $140.8MM) was raised through a combination of: 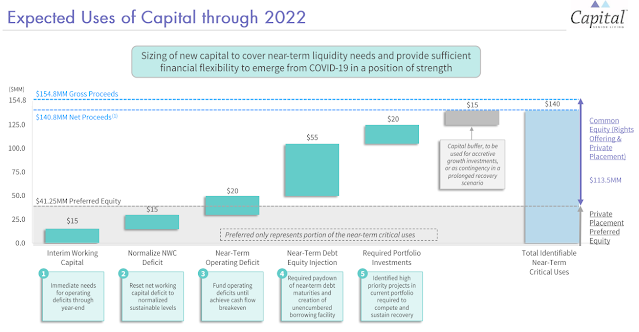 Most of the capital is going to be used to stabilize the company's balance sheet and take care of some deferred maintenance capex the company likely punted on the last two years.  The capital basically allows the company to recover and get back to some kind of normalized operating environment.  Senior housing has had the unfortunate position of getting hit by covid from both the revenue and expense side.  It's not fun to mention but obviously covid caused a lot of deaths in this age group and likely prevented a lot of move ins as family members stayed home and turned into caregivers to avoid subjecting love ones to senior housing during a pandemic.  On the expense side, first they had PPE expense and now a tight labor market which is squeezing their margins.
But attempting to look through to what their results could look like in a year or two as the world normalizes, the key numbers to run a scenario analysis are the occupancy and NOI margin (I'm going back to YE 2017, no good reason just seemed "normal", for their owned properties they did 88% and 38% respectively): 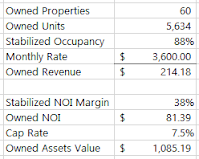 To be clear, they're a ways away from normal, as of their last earnings report, occupancy was 82.3% and NOI margin was 21%.
For the cap rate, it's a bit tricky too, senior living is similar to hotels where if you're the owner operator it's less of a real estate business and more of a service business.  But Ventas (VTR) recently purchased Fortress controlled New Senior Investment Group (SNR) for $2.3B:

"The transaction valuation is expected to represent approximately a 6% capitalization rate on expected New Senior Net Operating Income ("NOI").. the acquisition price implies a 20% to 30% discount to estimated replacement cost on a per unit basis.. the transaction price represents a multiple of <12 times estimated 2022 New Senior normalized FFO per share including full synergies."

It's not an apples-to-apples comparable, New Senior didn't operate their properties, just leased them out which is arguably less risky (although a lot of senior housing REITs have had to take back properties) but at least allowed them to be a REIT and lower their cost of capital.
The proforma debt and share count is a little messy, I've probably made some errors here, so those who know better, please feel free to correct me.

That compares favorably to today's share price of ~$32 per share, but that's an asset/takeout value (doesn't include corporate overhead, etc.) and assumes a full recovery.  But also doesn't include any additional growth or deal making which will likely come in the future, based on who they've brought in, the re-branding, it all signals that this is going to be more of a growth platform (similar to the GRIF to INDT rebrand).

On sort of a going concern basis, using normalized numbers, including the convert but excluding the effects of the warrants, I have it trading at 12.5x normalized EBITDA (below where other senior housing companies trade, but to be fair, they'd trade lower on a normalized number too).  Not screaming cheap on an absolute standalone basis, they probably need additional scale to create some operating leverage on the G&A and corporate expenses.
Other thoughts:

Disclosure: I own shares of SNDA (plus INDT and RHE-A still too)